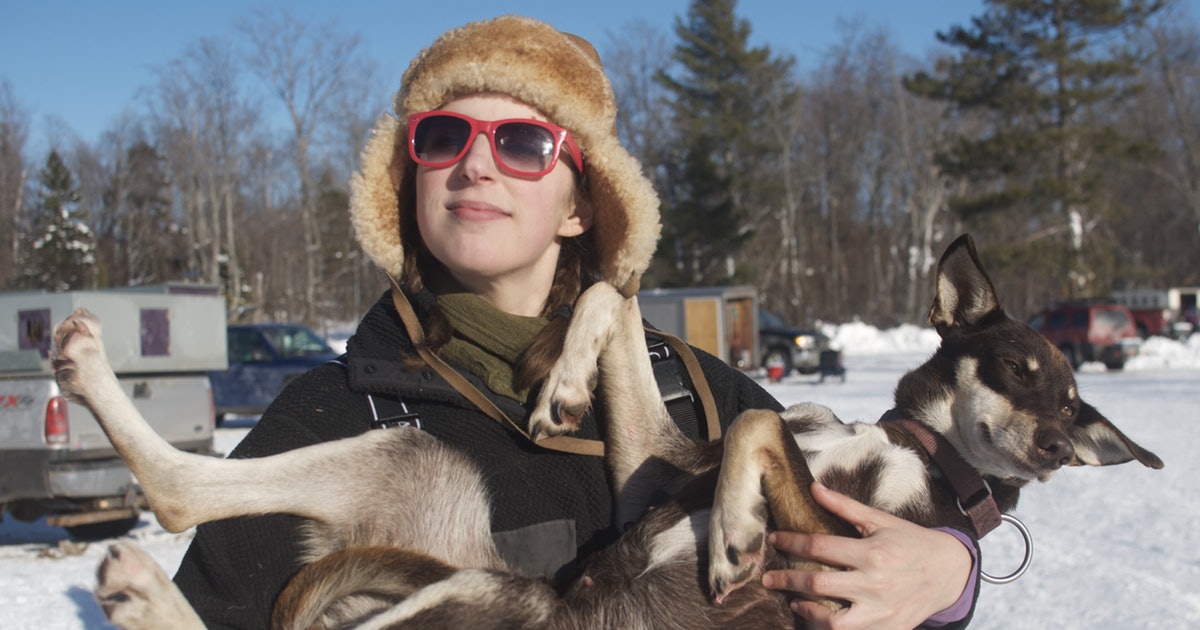 Have you ever dreamed about running away from it all and going exploring? As a kid, did you fantasize about escaping into the wilderness with your dog to explore the unknown, and coming home windswept and full of tales of rugged individualism? For Blair Braverman, a dogsled musher, adventurer, and writer, this kind of adventure is her day-to-day.

For Braverman, 31, being an adventurer is all about looking for new ways to engage with nature. As a dogsled racer, she’s the woman behind a team of eight to 14 of her beloved sled dogs as they compete in races of up to 1,000 miles. “It’s in some ways a very isolating sport, because you’re out in the woods, or you’re living a very strange and unusual rural life, and you’re far from other people who do the same thing,” she says. “Races are a chance for the whole community to come together.”

That community, of course, starts with her pack of 21 sled dogs, all Alaskan huskies with a love for running bred into their bones. Caring for the dogs takes up a big chunk of Braverman’s day. “Before I have my own breakfast, I’ll usually go out and give the dogs some [hydration mixture] broth, check on them, and say hi,” she says. The dogs live in doghouses outside to accommodate their cold-weather breed, but that doesn’t mean they don’t get puppy cuddles. “Petting and affection is a very important part of their lives,” Braverman says. After their pets, the dogs-in-training get hooked up to the sled — and then they’re off. In the winter, when Braverman and the dogs are in training, they can sled for anywhere from 10 to 80 miles in a day, sliding back home as late as 4 a.m. “It depends on where we are in the training schedule,” Braverman says.

But don’t for a second think anyone is forcing these dogs to run. “My main job is actually holding them back,” says Braverman. She says it’s actually harder to make the dogs stop and take a break than to keep going. “It’s really that they love running , and I’m sort of riding the brake on the sled to add resistance and keep them to a pace I know is gonna be sustainable.” She always keeps the sled loaded with supplies for the dogs and gear in case the team ends up spending the night outdoors. “Even a pretty short run, a couple of hours, you never know what’s going to happen in the woods.”

Braverman, who grew up in California, first became interested in mushing as a kid by reading stories of famous sled dogs, like Balto and Togo. As a teen, she spent a year at a dogsledding boarding school in Norway. The school, called 69 Degrees North, is part of a tradition of Norwegian “folk schools” intended to foster independence and passion in young people. “I told my mom and my dad that I was going to go to school for dogsledding, and they were very perplexed,” says Braverman. She worked as a dogsled guide from 2007 to 2009, and attended Colby College in Maine, where she studied environmental policy and worked with mushing teams in her free time. “Basically, whenever I could [be], I was off campus finding dogsledders to volunteer with,” Braverman laughs.

Braverman later went to grad school at the University of Iowa to study writing — where she met her husband, a “cowboy” and fellow adventurer with whom she now runs her northern Wisconsin-based mushing team, called BraverMountain Mushing. While mushing is by nature a solitary sport, Braverman notes it really takes a lot of behind-the-scenes work. While she’s out on the trail, her husband, Quince Mountain, will often be taking care of support tasks, like making sure the dog food is ready or keeping track of changing weather so that Braverman is prepared. “It’s quite unusual, in a couple that consists of a man and a woman, for the man to be the woman’s handler,” Braverman says. “It’s usually the other way around.”

Mushing is an extremely egalitarian sport, Braverman says, and there’s no gender divide for competitions. Because the biggest requirement is a solid bond with your dogs, the sport is also accessible to communities that are often excluded from sports, such as the young, the old, and the disabled. But that doesn’t mean it’s entirely free from the biases of the outside world. While in 2020, both Braverman and her husband are well-known in the fairly small mushing community, at first, people would automatically assume Mountain was the sled driver. “We’d both be standing by the sled, and a race volunteer would bring the bib over to give to the musher, and they’d hand it to him instead of me,” Braverman describes. “We got a couple of funny looks, and a lot of admiration.”

The unconscious bias is all the more relevant because the American ideal of an independent adventurer tends to be associated with… well, men. “So much of our understanding of the wilderness, and our narratives about the wilderness, come from these very traditionally male attitudes, of man versus wild, and man conquering nature,” says Braverman. “Which makes it a zero-sum game, right? Who’s winning, nature or the man? I don’t see it that way, and I don’t think that in my writing or in my life, I treat nature that way.”

In 2019, Braverman ran her first Iditarod — what she calls the “premiere event” of mushing. The 1,000-mile-long race weaves from Anchorage, Alaska, all the way to Nome on the Bering Strait. The race generally takes anywhere from nine days to two weeks to complete, and no help is allowed (although there are checkpoints for mushers and dogs to rest). “It’s a very emotional experience,” Braverman says. “It’s so long, this race. It felt like we were out there for months.”

I look at these dogs every day and I’m like, ‘Can you believe we did the Iditarod together?’

Alone on the trail, musher and dogs are reliant on each other. “There were a few places where the trail wasn’t visible, where we couldn’t see where we were going,” Braverman remembers. “My lead dog, Pepe — some dogs would lose confidence in a situation like that, and they’d be turning to you for guidance. And she just took it upon herself [to find the trail again].” Pepe used her nose and paws to test the snow for places where a sled had packed it down, or to find the scent of other dogs that had passed. “Out of whiteness, out of nothing … there were a couple of days, practically, where she was really finding every step of the way.”

Braverman came in 36th out of the 39 mushers to complete the race that year, after almost 14 days on the trail. She says the event heightened the already strong bond she has with her dogs. “Having that intense of an experience with them, now I look at these dogs every day and I’m like, ‘Can you believe we did the Iditarod together?’” she says. With Braverman’s success under her belt, Mountain is taking his turn running the 2020 race, which started on March 7. He is the first openly trans man to compete.

It’s a tricky career, and it’s not profitable.

Mushing isn’t for everyone. Besides the long days in the cold, it’s expensive. Braverman estimates mushing can cost anywhere from $30,000 to $100,000 a year, most of it taken up by the requirements of caring for the dogs, including the older members of the pack, who have retired from racing but are still part of the family. “It’s a tricky career, and it’s not profitable,” says Braverman. Even race prize money will often only cover the cost of entry. Instead, Braverman relies on her freelance writing and “microsponsors,” who pledge something like $1-$10 a month and receive mailing updates on the dogs, among other goodies. “We share our team on Twitter, and we have a pretty big audience there,” says Braverman. “This sport is so foreign to people, so getting to share why we love it and getting to share these wonderful experiences we’re having with our best friends out there, it’s fun!” In 2016, she published her book, about her mushing experiences.

At the end of the day, Braverman just wants to share her love of her dogs, and her sport, with the world. “If you’re interested in mushing, you don’t have to live in a northern place, you don’t have to have a team of dogs,” she says. As Braverman puts it, mushing “is working closely with even one dog.” (And yes, your pet counts.) “The best way to get involved is to just work with your dog at home,” she says. “And you can start today.”