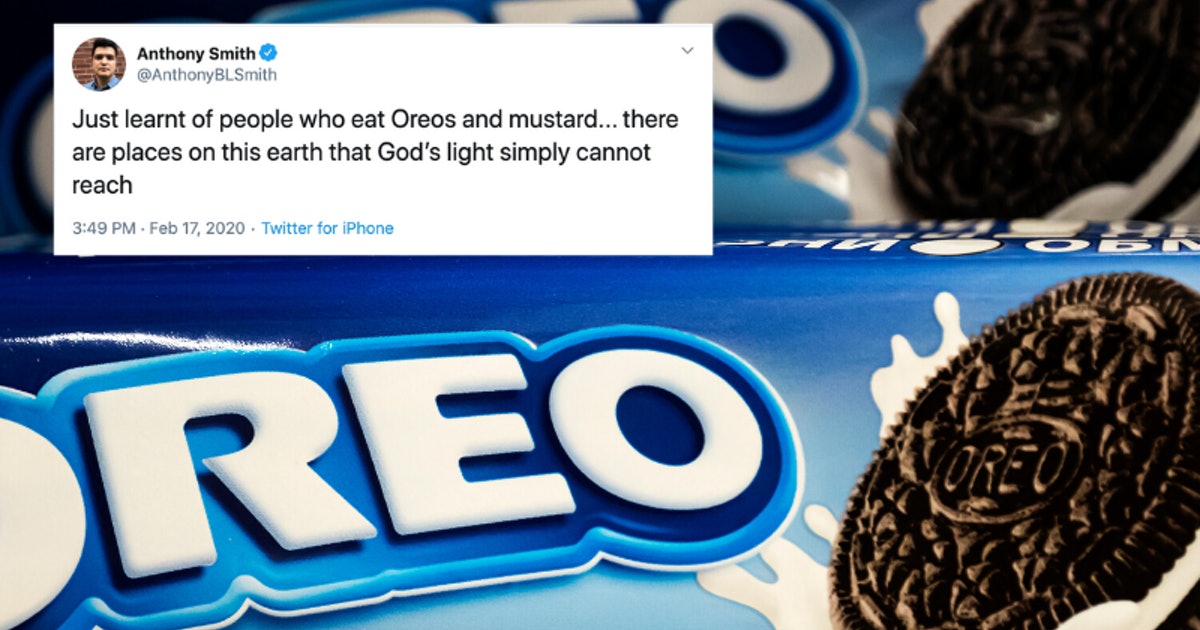 The internet is reeling after a recent crossword puzzle went viral. In one of the clues, it claimed some people eat their Oreos with everyone’s go-to yellow condiment. Whether you identify as team chocolate wafer or team cream filling, you’ll likely be so entertained while reading these tweets about dipping Oreos in mustard. As you’d expect, most of the responses question who would do such a thing.

While Oreos fans are no strangers to debating about how much “Stuf” or cream filling should be between your two chocolate cookies, a recent crossword puzzle answer gave them a reason to band together in a united front against an unexpected addition. The culprit? Good old yellow mustard, which many would argue are regular accompaniments on savory food items like hot dogs and cheeseburgers.

If you were filling out the crossword puzzle on Wednesday, Feb. 12, chances are you were stumped when you saw a four-letter answer with the hint “Cookie that some people eat with mustard.”

reporter Brett Murphy took to Twitter shortly after the crossword puzzle was released to share an email from an enraged fan who’d decided to try the questionable mash-up after learning that it was apparently a ~thing~.

“I tried it. You bastards,” the email, which was addressed to the “buffoons” behind the crossword, read. “Oreo and mustard—I can now inform you with learned experimental certainty—is wretched.”

“Who exactly are the ‘some people’ that consume Oreos with mustard?” “I would like to have a word with them. If you could kindly provide their phone numbers and mailing addresses, I would be most appreciative,” the angry reader concluded while asking the news service to refund the cost of the Altoid mints he’d had to eat to “get the taste” out of his mouth.

The email went so viral that hosts Hoda Kotb and Jenna Bush Hager tried the combination on a segment of their show on Tuesday, Feb. 18 — and it’s safe to say that the Twitterverse is gagging after learning there are people who actually eat these two seemingly incongruous items together by choice.

Many people are simply asking, “Who would eat Oreos dipped in mustard?”

Even had to get in on the fun.

There was one brave soul who decided to try the combo after watching the segment and said it was “oddly satisfying,” but it seems like the vast number of people would not agree with him.

In short, it’s up to you whether or not you decide to give this questionable combination a try, but judging from the tweets, I’d definitely try it at your own risk.