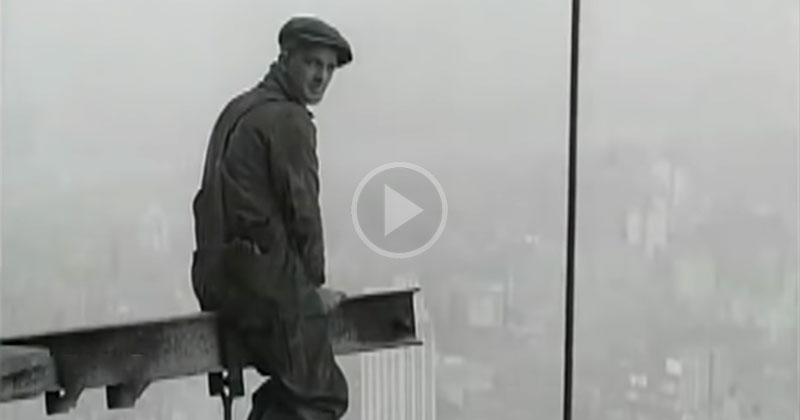 New York City’s Chrysler Building, one of the city’s most iconic skyscrapers, was built in a remarkably short time. Foundation work began in November 1928, and the building officially opened in May 1930. Even more remarkably, the steelwork went up in just six months in the summer of 1929 at an average rate of four floors a week.

At 1,046 feet (318.9 m), the Art Deco-style skyscraper was the world’s tallest building for 11 months before it was surpassed by the Empire State Building in 1931.It is the tallest brick building in the world with a steel framework.

Fox Movietone’s sound cameras visited the construction site several times in 1929 and 1930, staging a number of shots to maximize viewers’ sense of the spectacular heights. Movietone almost never put somebody in front of a camera without giving them something to say, so a number of scenes include some staged dialogue.

0:35 A construction worker is posed out on the end of a beam on the north side of the building. Another worker supplies his words (or thoughts). When it’s over, he gingerly makes his way off.

1:32 Another shot, taken the same day, shows plasterers and bricklayers posing for the camera. Far below, trains can be seen on the Sixth Avenue El. The Avenue itself is mostly tenament buildings.

2:09 A pair of construction workers, posing precariously on the edge of some pipework, give a few facts and figures about the building.

3:05 Workers wrestle on of the 61th-floor eagles into place. Far below, streetcars run up and down Lexington Avenue.

7:55 Workers on the scaffolding surrounding the needle spire that, for 11 months, made the Chrysler building the tallest building in the world.