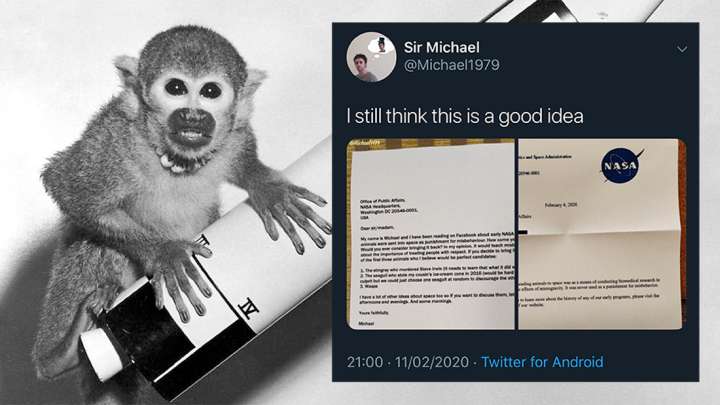 A man actually received a response for a brilliant spoof letter to NASA.

Twitter comedian Sir Michael sent a letter to NASA headquarters to ask whether they still send animals to space as a punishment for misbehavior, before including a list of animals (and their crimes) that he thinks should also be banished to space.

“Dear sir/madam,” the letter reads, “My name is Michael and I have been reading on Facebook about early NASA missions in which animals were sent to space as punishment for misbehavior. How come you stopped doing that?”

“In my opinion, it would teach misbehaving animals a lesson about the importance of treating people with respect,” he continued. “If you decide to bring it back, I have made a list of the first three animals who I believe would be perfect candidates:

1. The stingray who murdered Steve Irwin (it needs to learn that what it did was wrong)

2. The seagull who stole my cousin’s ice-cream cone in 2016 (would be hard to identify the exact culprit but we could just choose one seagull at random to discourage the others)

He informed NASA that he had other ideas about space, should they ever be inclined to discuss them.

NASA, bless their hearts, is used to dealing with ludicrous claims and questions from members of the public. Just yesterday it responded to a bizarre viral claim that brooms will stand on their end only on February 10 because of “the gravitational pull”.

The agency has also responded to previous claims that the world was going to end tomorrow (spoiler: this was in September 2017 so you can probably guess how that panned out) and to Gwyneth Paltrow’s Goop website selling stickers made from “NASA spacesuit material” that can “rebalance your energy”.

In Michael’s case, the agency responded politely as if it was just another normal request that they deal with every day.

“Dear Michael, the purpose of sending animals to space was as a means of conducting biomedical research in order to study the effects of microgravity,” they wrote, before pointing him in the direction of the history section of their website. “It was never used as a punishment for misbehavior.”

For those interested, you can find out what happened to the animals that went to space below.