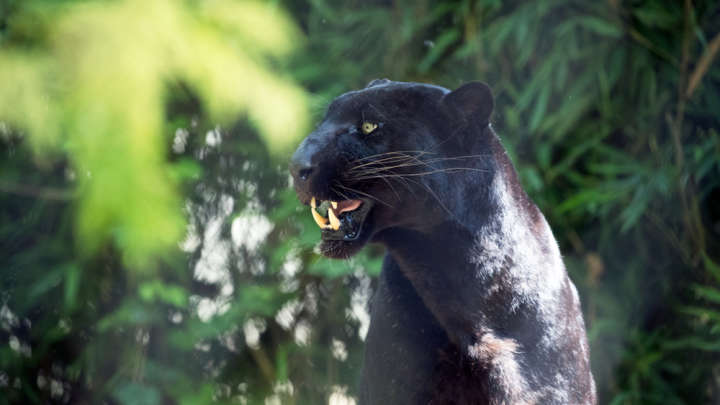 A few years ago, a black panther was found in Sri Lanka, but it was dead in a trap. The animal was thought to be the last of its kind to exist in the Teardrop of India. However, Sri Lanka’s Department of Wildlife Conservation (DWC) has just announced that it has spotted black panthers in the forests of Adam’s Peak, making them no longer considered extinct in the country.

After receiving information of sightings from local villagers, the DWC set up a number of camera traps to try to capture footage of the rare and majestic animals. They were not disappointed; the cameras reportedly snapped four different animals – one female, one male, and two cubs. The footage was originally recorded last October but the DWC wanted to confirm the findings before making an official announcement.

While its striking appearance might make the black panther seem like a unique species, the animals are actually just a color variation of a number of different big cats like leopards and jaguars. They are known as melanistic, which means they have a genetic mutation that gives them unusually high levels of the pigment melanin, making their fur jet black with subtle spots. Melanism is essentially the opposite of albinism, which causes very pale coloration due to a lack of pigment.

Melanistic leopards can be found across Asia and Africa, but only about 11 percent of leopards are melanistic. It’s thought that their dark coat gives them an advantage in shady forests as they can stay hidden from their prey. Therefore, black panthers tend to be found in dense tropical forests, while their more colorful counterparts do better in less covered areas, like Africa’s shrublands.

“The Sri Lankan Black Leopard is believed to have gained its unique characteristics due to a colour mutation,” DWC spokesperson Hasini Sarachchandra told the Sri Lankan Daily Mirror. “Out of the eight species of panthers living in the world, the sub-species, Sri Lankan Leopard is extraordinary due to its very limited population.”

The research was led by the DWC’s Dr Malaka Abeywardene and Dr Manoj Akalanka.

“The reason for these animals being black is mainly an adaptation for hunting purposes and for protection of their kind since they mostly roam in cold and dark places,” Dr Abeywardene told News 1st, noting the importance of conserving these beautiful and rare cats.

“We request the general public to come forward to protect these animals since they are an important gift given by mother nature.”