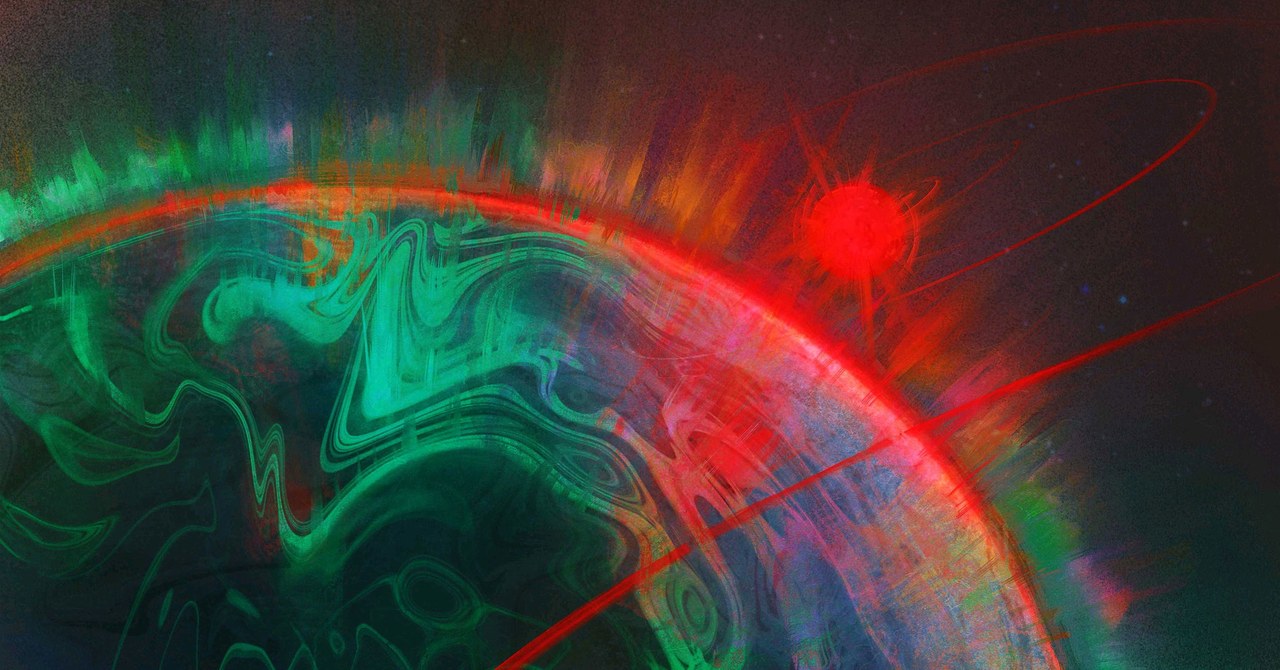 Jupiter’s moon Io—the solar system’s most volcanic world—has inspired a new way to find distant exoplanets. As the moon orbits Jupiter, it tugs on the planet’s magnetic field, generating bright auroras in Jupiter’s atmosphere. Even if we couldn’t see Io itself, the enormous auroras, pulsing to the beat of a hidden orbiting body, would tell us that something was out there.

Scientists have long suspected that a similar process might be at work with distant planets and the stars they orbit. Now, for the first time, astronomers say they have discovered an exoplanet by mapping the auroras of its host star, opening a new chapter in the quest to map the galactic menagerie of unseen worlds.

In the new study, published yesterday in Nature Astronomy, researchers used a collection of roughly 20,000 small radio antennas spread across Europe to detect the star’s telltale flares. They concluded that the flares could only be produced by a rocky planet about the size of Earth that takes between one and five days to orbit the star. Such a planet would be right at the edge of the star’s habitable zone, where temperatures are right for liquid water.

As with so many new techniques, this one promises more discoveries to come. “This could be a way of discovering more exoplanets than you can with the traditional methods,” said Jonathan Nichols, an astrophysicist at the University of Leicester who was not involved in the research. “It could be a way of probing the types of system that we usually find quite difficult to observe.”

The insight that allowed for the new discovery started a lot closer to home. Up around Jupiter, Io’s eruptions spew gas that’s dense with charged particles. As the moon rotates around its host planet, this charged gas swipes across Jupiter’s magnetic field lines “like plucking strings on a guitar,” said Nichols, who studies space-based magnetic fields. The waves created by these plucks travel up through the field lines and into the planet, where they emit bursts of radio emissions that come and go as the moon rotates around Jupiter.

The authors of the new paper suspect they are seeing a similar plucking—but this one is a planet plucking the magnetic field lines of a star.

The group began by analyzing a map of the sky made by the Low Frequency Array, or LOFAR, a collection of small radio antennas that can act as a single giant dish 1,500 kilometers across. LOFAR has been scanning the sky for a decade; in this time it has accumulated enough data to see fainter objects than any previous radio survey.

“You end up finding new things when you go deeper,” said Harish Vedantham, an astronomer at the Netherlands Institute for Radio Astronomy and lead author on the new paper.

Vedantham and his team mapped all the radio emissions spotted by LOFAR. They then overlaid this map with another map—this one of stars in the Milky Way, made by the Gaia space telescope. They then singled out the sources that came from stars rather than distant objects such as galaxies.

In doing so, they found GJ 1151, a faint star with a shockingly long-lived emission. GJ 1151 belongs to a class of stars called M dwarfs, which are small, dim, and extremely common; they make up roughly 70% of all stars in the Milky Way. M dwarfs are often extremely magnetically active. Many spin rapidly, sometimes rotating all the way around in just a few hours. This rotation can generate flares.

But GJ 1151 is a quieter star, less prone to outbursts than its siblings. And the bright radio activity that Vedantham’s team observed lasted at least eight hours—the total extent of their observation time. Such an extended flare could not have come from inside the star itself.

The radio flare had another curious property. Its light appeared to be created by electrons that were moving in a circle. That’s not what’s expected for an ordinary solar flare. It would, however, make sense if the bursts were coming from a planet’s charged particles looping through the star’s magnetic field.

As a result, the team concluded that the source of the strong radio emissions is a hidden Earth-size planet. “I think this group has done an exceptionally good job of teasing out, by process of elimination, the best remaining scenario that could explain what they see—an orbiting planet,” said Gregg Hallinan, an astronomer at the California Institute of Technology who is not part of the research.

Not everyone is completely convinced, however. Evgenya Shkolnik, an astrophysicist who studies star-planet interactions at Arizona State University, points out that there aren’t a lot of studies of M dwarfs at the low frequencies mapped by LOFAR. “The reality is that we just don’t know what the stars are doing at these frequencies, on these timescales,” she said. “Yes, it makes it unlikely that it would be a generic flare, but it doesn’t mean it couldn’t be some giant super-flare that is really rare.”

There are a few possible ways to confirm that the flare comes from an exoplanet. Researchers could continue to monitor GJ 1151’s radio waves. If they find three or four more bursts that happen on a regular schedule—perhaps a burst for each revolution of the planet—that would be “the gold standard,” said Hallinan.

Or they could use one of the established planet-hunting methods, though each has limitations. The radial velocity method watches for the gravitational tug of a planet on its host star, but this technique works best for massive Jupiter-size planets. Alternatively, the transit method watches for a dip in the light of the star that occurs when a planet passes between the star and Earth. In this case, the planet and star have to be directly aligned with our line of sight, and estimates suggest that fewer than 1% of planets are so perfectly oriented.

So far, confirmation from these complementary techniques has proved elusive. In a related paper, published yesterday in The Astrophysical Journal Letters, Vedantham and colleagues report that they couldn’t find any planet around GJ 1151 using the radial velocity method with a dedicated planet-hunting instrument in the Canary Islands. The result implies that any such planet has to be smaller than five Earth masses.

Another planet-hunting project, Carmenes, has studied more than 300 M dwarfs, including GJ 1151. Carmenes should be sensitive to even smaller worlds, but the survey isn’t yet complete. And Vedantham said that even if Carmenes didn’t spot the planet around GJ 1151, that would just put a lower ceiling on its possible mass.

The limitations of these other techniques show why an entirely new method to find exoplanets is so welcome. Terrestrial planets are far more common around M dwarfs than around gas giants, which suggests that LOFAR could find more planet-star interactions.

“You don’t need any special setup,” Vedantham said. “There should be many more like this.”

He estimated that LOFAR will find anywhere from dozens to hundreds of additional planets. And the upcoming Square Kilometer Array, a monster project of thousands of radio telescopes spread over two continents, should be able to probe even lower frequencies, allowing it to find far more planets.

“I wouldn’t be surprised if [it finds] many hundreds to thousands once it’s operating in full sensitivity,” Vedantham said. “The sky is full of new and interesting things if you’re sensitive to it.”