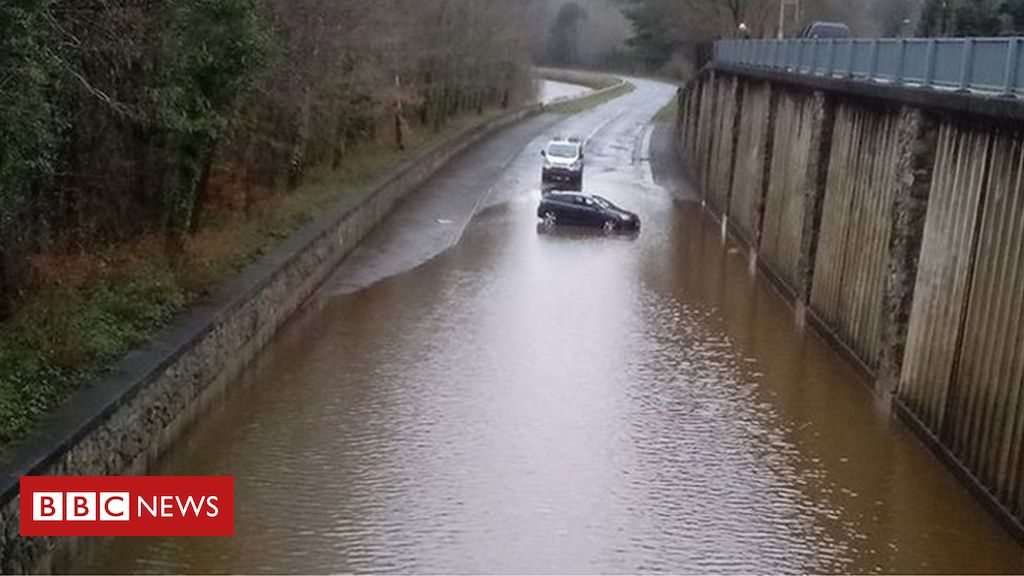 Firefighters had to rescue four people from flood water when the two cars they were in got stuck.

Two passengers were given precautionary checks for hypothermia.

Part of the A470 at Dolgellau, Gwynedd was shut after the two cars got stuck at about 04:05 GMT. Several roads remain closed due to flooding, according to Traffic Wales.

There is a Met Office yellow warning for rain in mid and south Wales on Saturday from 22:00.

It said the rain could be “especially persistent” in areas “currently saturated and highly sensitive to further rainfall”.

North Wales Fire and Rescue Service confirmed three adults and a child were pulled to safety from the trapped cars in Dolgellau.

The road has now re-opened in the town.

However, flooding on the A470 has forced highway officials to close the road further north between Betws-y-Coed and Bodnant in Conwy.

Meanwhile, communities are continuing the clean-up following damage from Storm Dennis, with about 100 volunteers removing six tonnes of debris at Bute Park in Cardiff on Saturday, according to council leader Huw Thomas in a tweet.

Work is also under way at Clwb y Bont, Pontypridd, which was left underwater when the nearby river burst its banks and flooded main streets.

Prince Charles met flood victims and their rescuers during a visit to the town on Friday.

The storm affected more than 1,000 homes and businesses in Rhondda Cynon Taff alone, and damage to council infrastructure could cost up to £30m, according to council leader Andrew Morgan.

In Monmouth, Welsh Water said it was continuing to work to restore services at its Mayhill treatment plant.

It has been using a fleet of 40 tankers to manually top-up fresh drinking water reserves and ensure supplies are maintained.

“Some customers in Monmouth have been asking our colleagues in the area if they need to boil their tap water: Our answer is no,” said a Welsh Water official.

“We’re providing bottled water as a precaution in case supply is interrupted and for a small number of customers without water.”

Bottled water stations have also been set-up at Monmouthshire Comprehensive, Trellech Primary, and at Redbrook Road.

The weather warning is place from Saturday evening until 11:00 on Sunday.

There are currently nine flood warnings in place covering the River Vyrnwy, Severn and the Lower Dee Valley between Llangollen and Wrexham.