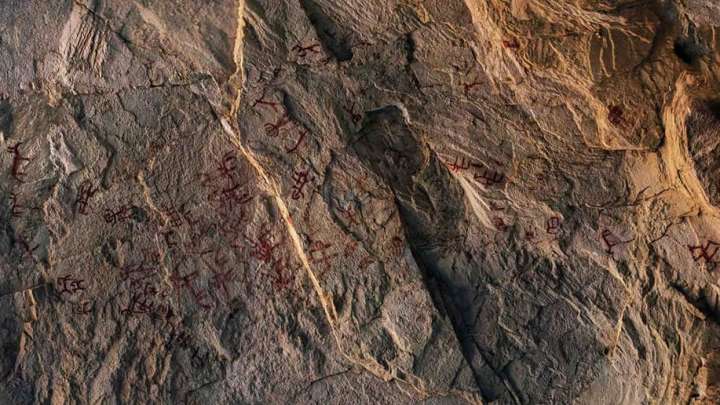 A newly discovered cave in Sinai, Egypt, is the first of its kind in the region to be found decorated from floor to ceiling with colorful ancient paintings – and it was all by chance.

Egyptologists with the Ministry of Tourism and Antiquities, Arab Republic of Egypt discovered the cave in a region located 30 kilometers (19 miles) north of the city St. Catherine and 60 kilometers (38 miles) southeast from Sarabit el-Khadem, an ancient Egyptian city famous for its turquoise mines. The sandstone cave is located in a difficult-to-access area, measuring about 3 meters deep (9.8 feet) by 3.5 meters wide (11.5 feet), said Dr. Mustafa Ministers, Secretary-General of the High Council of Antiquities in a Facebook post.

Dark red paintings of animals, including donkeys and mules, on the roof are considered the oldest, tracing back to between 5,500 and 10,000 BCE. The bodies of the animals from this era are consistent throughout the cave – five of the same animals are seen on the roof at the entrance of the shelter, as well as a set of human prints on the ceiling and on a rock at the center of the cave.

The second group of paintings is characterized by paintings that appear to be women and animals during the Chalcolithic Period, or Copper Age, the era between the Neolithic and Bronze Ages characterized as a transition between stone-tool use to metal-working.

The Sinai Peninsula is a large desert landmass located between the Gulf of Suez and the Suez Canal. The region has been inhabited since prehistoric times with the earliest written information dating back to 3,000 BCE, when ancient Egyptians recorded their explorations searching for copper ore, according to Britannica. Rock art in Egypt is spread throughout the country and largely split between ancient paintings discovered in the Red Sea Hills in the east and to the central Nile Valley and westward toward the Western Desert, according to the Trust for Africa Rock Art. The earliest rock art dates to around 17,000-years-old and has been discovered recently. Among the continent’s many rock art caves is the most well-known “Cave of Swimmers” in Egypt’s mountainous Sahara plateau, Gilf Kebir.