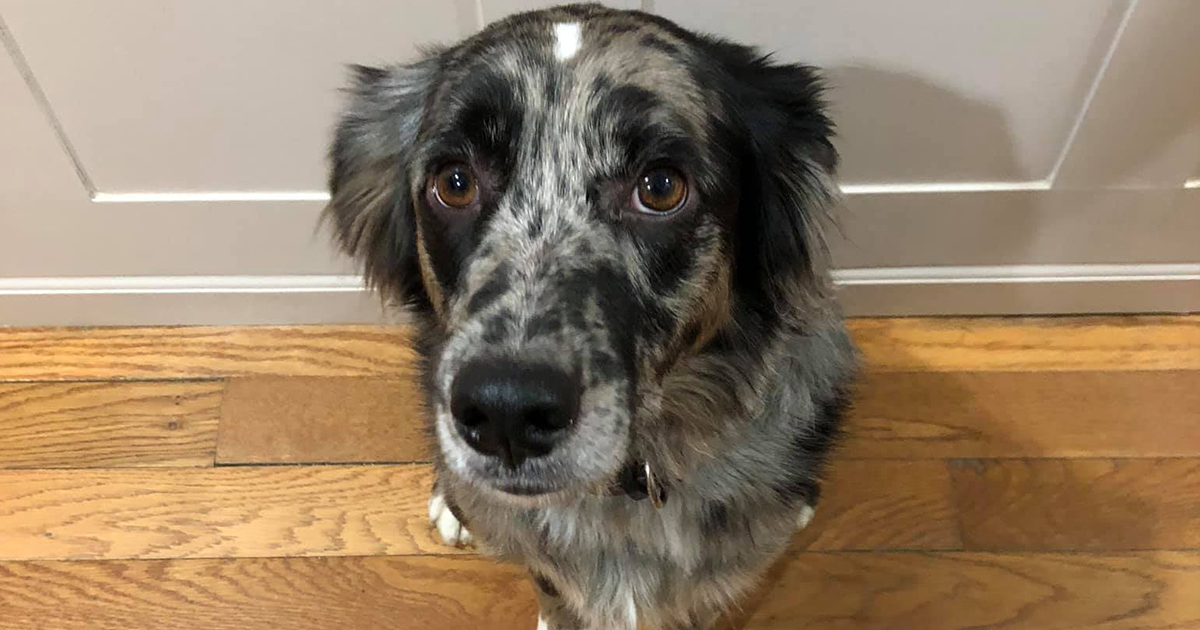 It’s never a dull life if you’re living with pets. It doesn’t matter if it’s something as traditional as a dog or a cat, or as exotic as a pet praying mantis—it’s always a treat to be living with an animal companion.

Regardless of species, pets are family, and as family goes, everyone gets to share both the good and the bad. And while pets are a good source of joy and happiness, they do give us a scare from time to time. Sometimes the joy and the scare go together, but in the following case, fortunately, it starts off with a scare, and ends on a positive note.

Meet Frosty, the dog that got stuck in his own poop in a hard-to-see place and couldn’t move Kelly Rheaume, a professional pet groomer and grooming business owner with whom Bored Panda got in touch, noticed one evening that her Mini Australian Shepherd named Frosty had gone missing. After searching the barns, calling for him and squeaking his toys, she went out into the fields.

Frosty is a two year old Mini Australian Shepherd. He was originally introduced to the family for Rheaume’s then 12-year-old daughter to train as a diabetic alert dog. “He actually did really well, but my daughter lost interest in the training and Frosty became more bonded to me. Frosty spends his day with me at work, usually sitting at my desk and greeting customers, or playing with his best friends Georgia and Paris. Frosty also loves the great outdoors: hiking, swimming, kayaking, boating, herding my goats around, and his favorite catch the ball.”

During her search, she noticed a shimmer of eyes about the height of a dog or a coyote in one of the fields next to hers. She got back to get her truck for an easier tread through the fields, and as she was pulling out of her barn again, she noticed how the car’s headlights were illuminating a dark corner of her yard—something was there. After nearly an hour, Frosty was found sitting in his own poop, terrified to move or even bark Sure enough, it was Frosty, frozen in silence. At first, Rheaume thought that he had been injured and couldn’t move. Heart pounding, she approached Frosty, fearing the worst, but he gave her a look that she knew very well—he had poop stuck to his behind.

For context, apparently Frosty doesn’t walk when he has poop stuck to his butt—he becomes paralyzed from the hind legs down.

“Frosty seems like he has a phobia of poop. If another dog poops in the house or my salon, he will hide or put himself into a crate. I’m a professional groomer, so Frosty is groomed on a weekly basis and his butt is kept clean and trimmed at all times for the sole purpose of avoiding poop getting stuck to his butt.” Apparently, Frosty has a poop phobia and freezes up if it gets stuck to him or hides form it on sight Apparently, this isn’t the first time this has happened, explained Rheaume: “This has happened three times before. The first time he was just a puppy and he was still being potty trained. He went upstairs to poop and it got caught on his butt. He freaked out screaming and before I could get to him, he fell down the stairs and my little yorkie beat him up for screaming.”

Needless to say, the latest of Frosty’s poop shenanigans gave Kelly quite a scare. She was anxious as it was, but the fact that he was just laying there in the yard where she couldn’t see him the whole time, without barking or crying out, while she was thinking the worst, made it an even more stressful Monday night.

However, all was well in the end as Rheaume went inside to get a paper towel to clean him up. His legs were immediately restored. “It’s a Monday night miracle, Frosty can walk again!” joked Rheaume in the Facebook post that followed the adventure. The story went viral as soon as Rheaume, the owner, posted it on Facebook It was the fact that this story went viral that also led to an explanation as to why Frosty acts this way. “The owner of Frosty’s dad reached out to me and it turns out this fear of poop is genetic—both his dad and full brother freeze up when they get poop stuck to their butts,” explained Kelly Rheaume.

She continued: “Frosty is very sensitive. You can’t call him a bad boy—it breaks his heart and he gets very sad. When I found him, he knew I was upset by the tone of my voice. I was exhausted from searching, but I couldn’t scold him. He was already so upset.”

The story went viral immediately, getting over 36,000 reactions on Facebook with over 20,000 shares and nearly 12,000 comments with people telling their own stories of their dogs’ shenanigans. “I was shocked that it went viral! I would have never thought a story about my dog having poop stuck to his butt would attract so much attention—I really enjoy reading all the comments and seeing all the pictures that people have been sending me of their dogs. I think it’s great that everyone is getting a good laugh from this. From reading the comments it sounds like we all needed it!”

Do you have any ridiculous pet stories to share? Leave a comment about it in the section below!