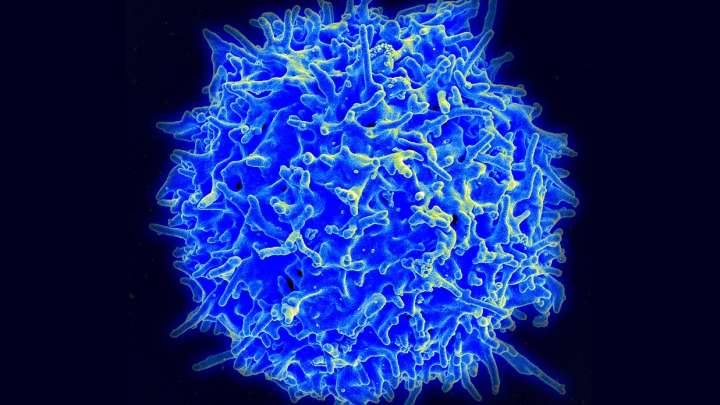 Scientists have discovered a new soldier of the immune system that could hold the power to treat most types of cancer.

A new study, reported in the journal Nature Immunology, has documented the discovery of a T-cell armed with a new type of receptor that is able to identify and kill most human cancer types while ignoring healthy cells.

Although independent experts warn that this discovery is still in its infancy, it could pave the way towards a highly sought after “universal” cancer therapy in the future.

A T-cell is a lymphocyte, a type of immune system cell that plays a central role in the body’s immune response. They can be used to treat some cancers in T-cell therapy whereby a patient’s own T-cells are extracted and genetically edited in a laboratory, arming them with a gene for a special receptor that binds to a certain protein on the patient’s cancer cells. This identifies the cell as a rogue and sparks an attack from the immune system. It can be very effective, but the treatment has to be personalized to each patient and only works in a limited number of cancers.

This newly discovered T-cell is a lot more flexible. Researchers at Cardiff University in the UK found the T-cell is equipped with receptors that can identify many different types of cancer through a single cell-surface molecule called MR1. Unlike other cell-surface molecules that are used by T-cells to identify cancerous cells, MR1 does not vary in the human population either.

In theory, these new T-cells would be the perfect candidate for T-cell therapy as they could provide a “one-size-fits-all” cancer treatment.

“Previously nobody believed this could be possible,” Professor Andrew Sewell, lead author on the study and an expert in T-cells from Cardiff University’s School of Medicine, said in a statement.

“Cancer-targeting via MR1-restricted T-cells is an exciting new frontier – it raises the prospect of a ‘one-size-fits-all’ cancer treatment; a single type of T-cell that could be capable of destroying many different types of cancers across the population,” he added.

In a lab experiment carried out on mice, T-cells equipped with the new receptor were shown to kill lung, skin, blood, colon, breast, bone, prostate, ovarian, kidney, and cervical cancer cells. It’s too early to know how this treatment would translate into humans, but the discovery certainly holds a lot of promise.

“There is no question that is a very exciting discovery, both for advancing our basic knowledge about the immune system and for the possibility of future new medicines,” Prof Daniel Davis, Professor of Immunology at the University of Manchester, who was not involved in the study, commented on the findings.

“So far, the power of these immune cells to kill cancer cells has been tested in a lab dish and in mice. At the moment, this is very basic research and not close to actual medicines for patients,” he added. “But in the long term, the hope is that this type of immune cell could be the basis of new immune therapies, either by infusing these cells directly into patients or by unleashing their capacity to act.”