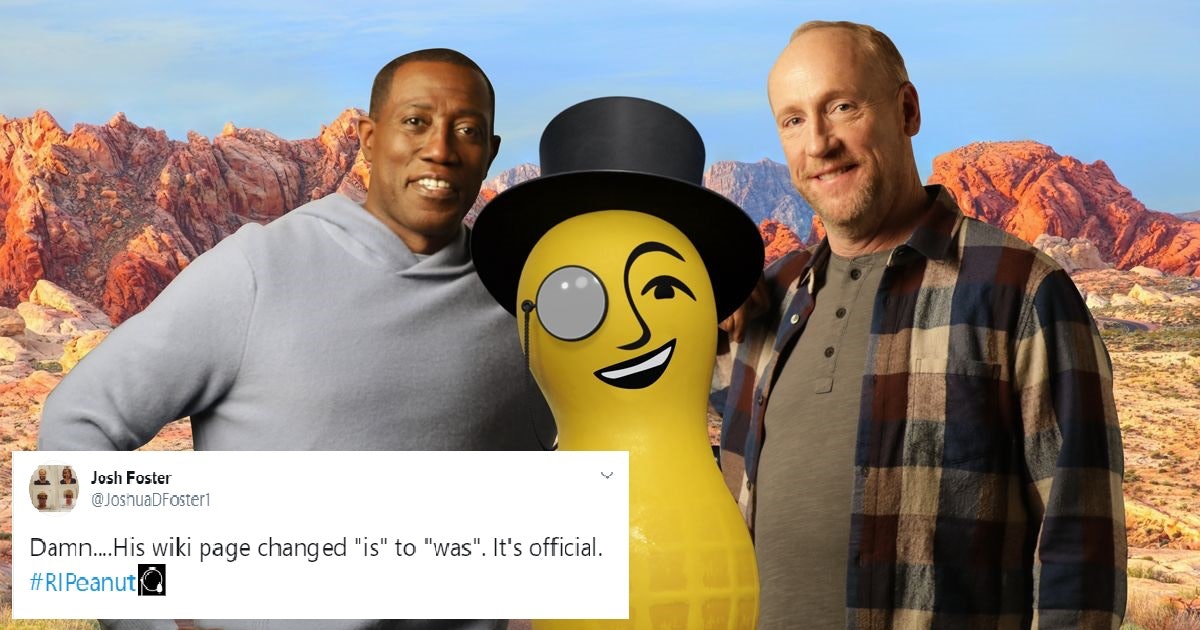 These Tweets About Mr. Peanut’s Death In Planters’ 2020 Super Bowl Commercial Are A Lot

It’s official: Planters has killed off Mr. Peanut. The brand’s Super Bowl pre-game ad features Matt Walsh, Wesley Snipes, and Mr. Peanut himself, who saves the lives of his friends in his final act. People on Twitter already have a lot to say about it. These tweets about Mr. Peanut’s death in Planters’ Super Bowl commercial are all over the place.

On Wednesday, Jan. 22, Planters shared the ad ahead of the big game, and it begins with Mr. Peanut, Wesley Snipes, and Matt Walsh (of fame) in the NUTmobile driving down a highway through mountainous terrain while singing “(I Just) Died In Your Arms” by Cutting Crew, which is a sign of things to come. The van nearly hits an armadillo in the road, so Mr. Peanut swerves out of the way. The car ends up diving off a cliff, while the trio clings to a tree branch. When the branch begins to break, Snipes and Walsh argue about who should let go, which ultimately leads to Mr. Peanut sacrificing himself to save his friends. TBH, it’s kind of a lot to handle.

The Super Bowl ad, which plays like a scene out of an action movie, is set to air during the pregame show on Sunday, Feb. 2, but fans can watch it now on YouTube to see it all go down. To break the news to fans, the @MrPeanut Twitter account changed its name to “The Estate of Mr. Peanut” and posted a 10-second clip of the ad with the caption, “It is with heavy hearts that we confirm that Mr. Peanut has died at 104. In the ultimate selfless act, he sacrificed himself to save his friends when they needed him most. Please pay your respects with #RIPeanut.”

It’s definitely a different commercial, and Mr. Peanut stans are doing a mix of paying their respects and totally trolling the brand for killing off the mascot.

Many are just trying to cope with the loss:

One user insists Mr. Peanut is still alive and living in Cuba:

A lot of users are questioning why Mr. Peanut had to go:

With Mr. Peanut gone, where is the consistency in our lives anymore?

And then it just gets weird:

The full ad really takes you through all the emotions:

Fans have the chance to get a commemorative pin in honor of the famous legume by posting their sighting of the NUTmobile before and during game day on Sunday, Feb 2. You can also look for a contest opportunity from @MrPeanut on Twitter, beginning Friday, Jan. 24 through Monday, Jan. 27, for a chance to win some commemorative packaging from Planters. Planters is asking fans to pay respects with the #RIPeanut hashtag on Twitter and watch the official Super Bowl commercial during the big game, where fans will get some closure with Mr. Peanut’s funeral.