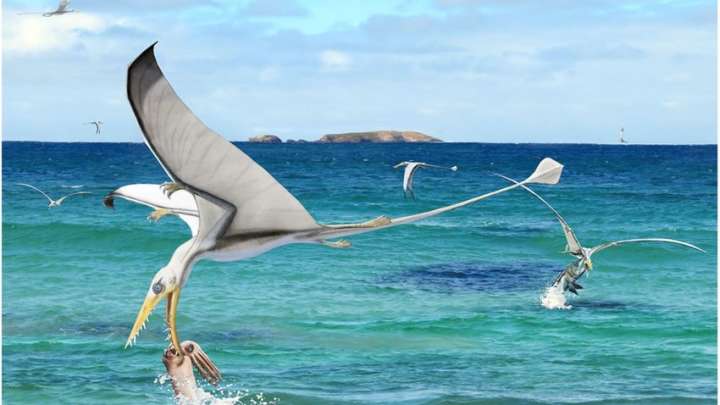 If you’ve ever wondered who would win in a squid vs pterosaur fight, a 150-million-year-old fossil has revealed that in one case at least, the pterosaur failed to clinch the win, and even left a tooth in its attempted victim.

The fossil reveals in unprecedented detail the perfectly preserved soft-bodied cephalopod – itself unusual to find in the fossil record – with a tooth that has been identified as belonging to the pterosaur Rhamphorhynchus muensteri embedded in it. While it’s not known if the ancient squid died from this attack, it is the first direct evidence of a failed predation attempt of a pterosaur on a cephalopod.

Reporting in the journal Scientific Reports, researchers from the UK’s University of Leicester and Germany’s Ruhr-University Bochum describe how essential this evidence is for reconstructing long-gone food webs.

The fossil was found in the Late Jurassic Solnhofen Archipelago in Bavaria, Germany, a site famous for revealing the imprints of soft-bodied creatures like sea jellies that would normally decompose leaving no trace, thanks to the soft carbonate mud-turned-limestone of the former lagoon. In fact, this exceptionally preserved Plesioteuthis subovata specimen even includes the fossilized ink sac and black ink.

There is evidence that Rhamphorhynchus included soft-bodied squid in their diet as remains of them have been found in fossilized pterosaur stomachs before. However, it was not known how the pterosaurs caught the squid, were they predators or scavengers? Did they skim over the water and pluck their prey, or dive into the water like today’s gannets?

The squid was fully grown and measures 28.5 centimeters (11.2 inches), while the largest known specimen of R. muensteri measured 1.26 meters (4.1 feet) long with a wingspan of 1.81 meters (5.9 feet), so it’s not difficult to imagine the pterosaur predating on the much smaller squid. R. muensteri also had a wicked curved, sharp, beak-like jaw full of forward-facing, needle-like teeth, excellent for snapping up fish.

Analyzing the fossil and the angle of the tooth, the researchers think the pterosaur attacked the squid at, or close to, the water’s surface. This, they say, suggests that it plucked its prey from the surface, perhaps even resting on the surface like modern gulls, rather than diving or skimming. R. muensteri’s short torso and legs are features seen in other pterosaurs known to have been able to launch from water.

This, they conclude, shows it was likely a predatory hunter rather than a scavenger, that hunted near the surface of the water. Several fossils found previously that show R. muensteri in the jaws of predatory fish corroborate this, they say, as for an aquatic creature to catch an aerial animal in its jaws, the interaction had to happen near the water’s surface.

Pterosaurs are occasionally mistakenly called flying dinosaurs, but were not dinosaurs at all. They also weren’t the precursors of birds either. Instead, they were flying reptiles. Both dinosaurs and pterosaurs shared a common ancestor, but our modern birds descend from small feathery dinosaurs, not these ancient “winged lizards”.