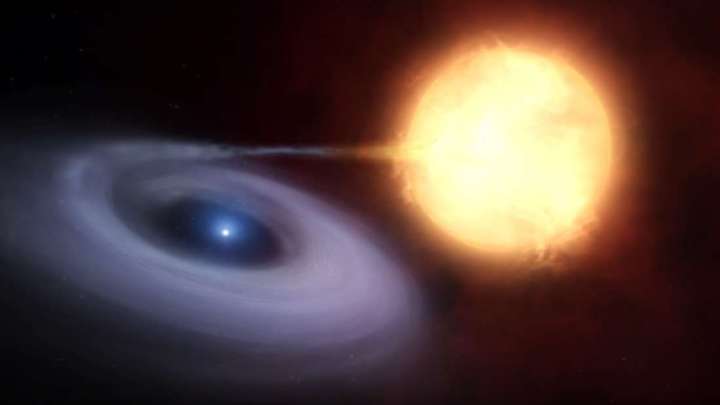 Faint star V Sagittae is already known as a unique binary system in its own right, but astronomers now believe it will become much more so by the end of the century. The two stars will merge into a nova, one that is possibly as bright as the brightest star in the sky.

The prediction comes from careful analysis of data collected since the 1890s. The binary system is what is known as a cataclysmic variable (CV), where an ordinary star orbits a white dwarf. The dwarf is constantly stealing material, getting brighter as it does so. V Sagittae (V Sge) is the most extreme of all known cataclysmic variables – 100 times brighter and with stellar winds similar to those emitted by red giants. The cause of this is the ordinary star that’s 3.9 times more massive than the white dwarf.

“In all other known CVs the white dwarf is more massive than the orbiting normal star, so V Sge is utterly unique,” Professor Emeritus Bradley E. Schaefer, from Louisiana State University, said in a statement.

The 130-years’ worth of observations indicates that the rate at which the white dwarf is stealing material is exponentially increasing, with the two probably merging sometime between 2067 and 2099, “most likely near the middle of this range.”

“We now have a strong prediction for the future of V Sge,” said Schaefer. “Over the next few decades, the star will brighten rapidly. Around the year 2083, its accretion rate will rise catastrophically, spilling mass at incredibly high rates onto the white dwarf, with this material blazing away. In the final days of this death-spiral, all of the mass from the companion star will fall onto the white dwarf, creating a super-massive wind from the merging star, appearing as bright as Sirius, possibly even as bright as Venus.”

The event is a nova, not a supernova. The star will not explode to bits but form a star with a degenerate white dwarf core, a hydrogen-burning outer layer, and a large envelope of mostly hydrogen. The star will remain at its explosive brightness for about a month and then slowly fade back.