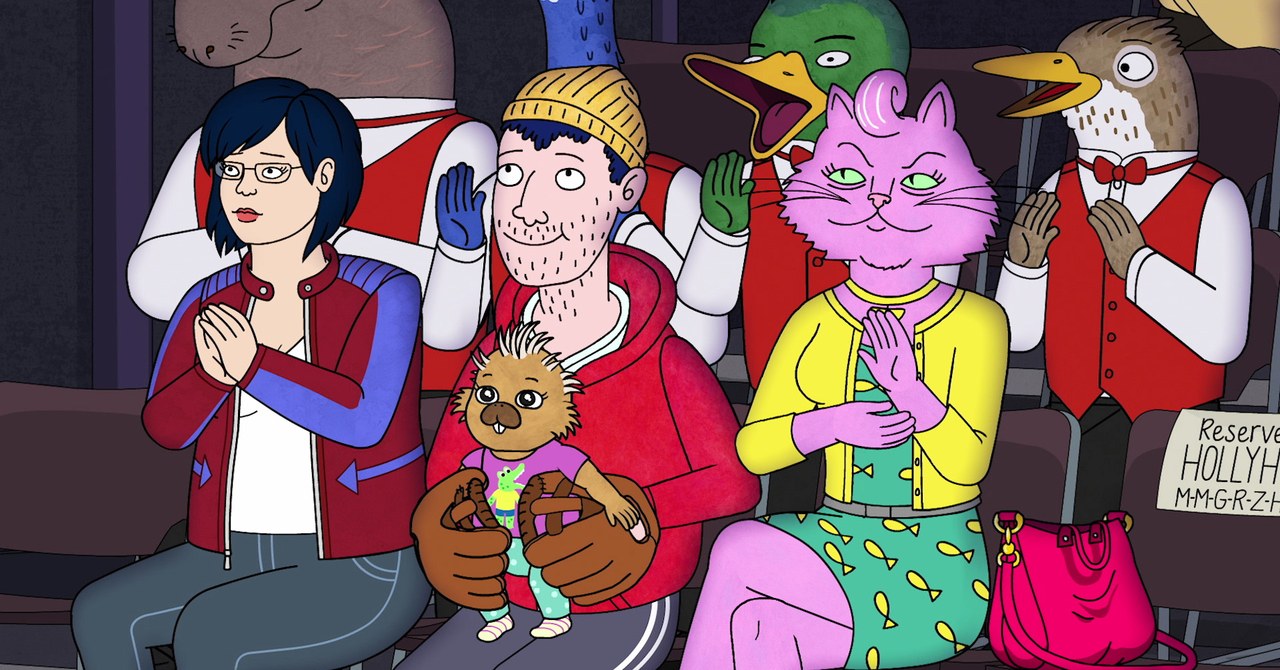 BoJack Horseman—Netflix’s best, most emotionally generous show—contains a show within the show, the 1990s sitcom Horsin’ Around. It stars the anthropomorphic horse BoJack as an adoptive father of three. BoJack’s very first episode, from 2014, features the final scene of Horsin’ Around’s very last. The children sob in a hospital waiting room as a doctor informs them that BoJack “died of a broken heart because you didn't appreciate him enough, and now he’s gone forever.” They’ll be turned over to child services. “You're the state’s problem now.”

The joke, as BoJack mansplains of his own quips, works on both levels. The scene introduces BoJack’s signature brand of comedy, which fully embodies George Saunders’ maxim: “Humor is what happens when we’re told the truth more quickly and directly than we’re used to.” The animated dramedy, which ended on Friday after six seasons, walloped its audience with fiendish punch lines on death, depression, addiction, abuse, and the creeping sense that “life is just one long, hard kick in the urethra.”

The Monitor
Netflix Got More Oscar Nominations Than Any Other Studio

The hospital joke also portends the bleak turn Bojack itself would take. What began as a sharp if predictable adult cartoon in the South Park tradition grew to inspect life’s urethra in all its wounded contours. Those punch lines became poignant plotlines and textured, often tragic character studies of washed-up antihero BoJack (Will Arnett in the most dynamic acting of his career) and his circle of despair. Watching his character die in Horsin’ Around, BoJack deadpans, “We may have gone too dark on that series finale.” For BoJack, its own pivot to darkness made it the streaming platform’s guiding light.

Netflix hoards its ratings deep in a Los Gatos bunker, but BoJack has long drawn the company’s most rapturous reviews, from the Jesuit magazine America to Netflix CEO Reed Hastings. Why did it cancel its thoroughbred? My theory, drawn from creator Raphael Bob-Waksberg’s intimations and my own failures to convert doubters, is it’s difficult to evangelize beyond season 1.

What’s in it for me? skeptics ask. An eviscerating Hollywood satire, for starters. In one episode, Jessica Biel sets Zach Braff on fire and eats him. Yes, and? It’s magically animated by Lisa Hanawalt (creator of last year’s also-unjustly-canceled Tuca and Bertie), who crafts a glittering world of humanoid, paranoid rabbits, badgers, lizards, and Sextina Aquafina, a dolphin pop star who sings the pro-abortion banger “Get Dat Fetus Kill Dat Fetus.” Amid BoJack’s nihilistic descent is a feast of candy-colored animal pun Easter eggs: Krill and Grace, the pig actor Jon Ham, a rottweiler tough guy with a “Beware of Me” chest tattoo. Yes, and? There’s a jubilant guess-who who’s who of voice actors: Lisa Kudrow (as an owl emerging from a coma), Hilary Swank (the insufferable Justin Bieber–type Joey Pogo), Margo Martindale (a criminally diabolical version of herself), LaKeith Stanfield, Keith Olbermann, Stephen Colbert, Lance Bass, Whoopi Goldberg, Paul McCartney, RuPaul, and Nicole Holofcener.

Yes, and? Well, what more do you want? That was 2014. As TV got more niche, BoJack got more expansive. Not only did its writers take a more conscientious look at BoJack’s boorishness and betrayals, they also deepened the story lines for those he betrayed: the loyal Labrador retriever Mr. Peanutbutter (Paul F. Tomkins) and the disintegration of the dog’s marriage to the morally insecure human Diane Nguyen (Alison Brie); BoJack’s ex and manager, the overworked, manipulative pink cat Princess Carolyn (Amy Sedaris), who can only achieve happiness when she imagines her great-great-great-great granddaughter’s future, but even then she imagines a dystopia; his roommate, Todd (Aaron Paul, who’s called Todd “the first asexual character on television”); and former child star Sarah Lynn (Kristen Schaal), whom BoJack, lonely in his addiction, yanks from sobriety into a fateful bender.

Seasons 2 through 6 offer some of TV’s shrewdest commentaries on issues both topical and timeless, from MeToo and celebrity apology tours to the futility of magical thinking and the chaos of grief. In season 5’s “Free Churro,” BoJack delivers an episode-long eulogy to his cruel mother, full of scorn, painful memories, and meditations on mortality. “You never get a happy ending,” he says. “Because there’s always more show. Until there isn’t.” But sitcom high jinks always loom in the gloom. BoJack concludes, “No use beating a dead horse,” steps to the casket, and realizes he’s at a frog’s funeral.

In 2020, when there are a record 532 scripted shows (a season to binge every weekday of the year, and four on weekends!), BoJack ends as perhaps the most emotionally whole program of them all. Each 25-minute episode has just as many tongue-twisting pop culture zingers as 30 Rock, as much surreal animated splendor as Adventure Time, as much existential abyss-plumbing as True Detective, as much emotional terrain-riding as This is Us, Euphoria, and Mad Men combined. In this hot, cold, polarized, predictable year of our Lord, a long day of kicks to the urethra leaves us yearning for a lot. BoJack scratches itches for escapism and challenging mind-expansion.

Now there’s no more show. Does BoJack get a happy ending? If you’ve made it beyond season 1, you’ll know it’s no spoiler to say no. The show bends less toward happiness and more toward an understanding of what creates unhappiness, which is often rooted in an unwillingness to see the unhappiness in others.

Dread dominates the final episodes. All of the misogyny, abuse, neglect, and deceptions BoJack has spent years running from, reflecting on, and repeating threaten to come out in an exposé (of course penned by an old-timey Southern belle pig as a bizarro version of Ronan Farrow). Against the darkness there’s still dumb-brilliant wordplay, a scorching summation of Christopher Nolan’s oeuvre (“women are involved, but it’s really never about the women; it’s about me”), and dozens of jokes about lazy Susans.

When the story blows open, BoJack spirals to yet a lower, rockier rock bottom. Amid the fallout, a network executive (coolly voiced by Anjelica Huston) tells the now universally hated BoJack that in order to sell Blu-Rays of Horsin’ Around, they’ll have to edit out all his scenes from the show. They did the same for The Cosby Show, she says; it’s now just called The Show. Season 6 was written after BoJack was canceled. Is this a sneaky commentary on Netflix’s new we’ll-try-anything-and-everything-and-see-what-sticks approach to programming?

BoJack is dejected. All he had left was the ghost of his fame; now they’re killing his ghost. Does any of it matter? he asks. Huston answers with another dumb-brilliant line, the thesis of the show, and the state of the world in 2020: “The truth is none of it matters and the truth is all of it matters tremendously. It’s a wonder any of us ever get out of bed at all. And yet we get out of bed.” Now that BoJack’s no longer, we’ll get out of bed to find ways to fill its void.