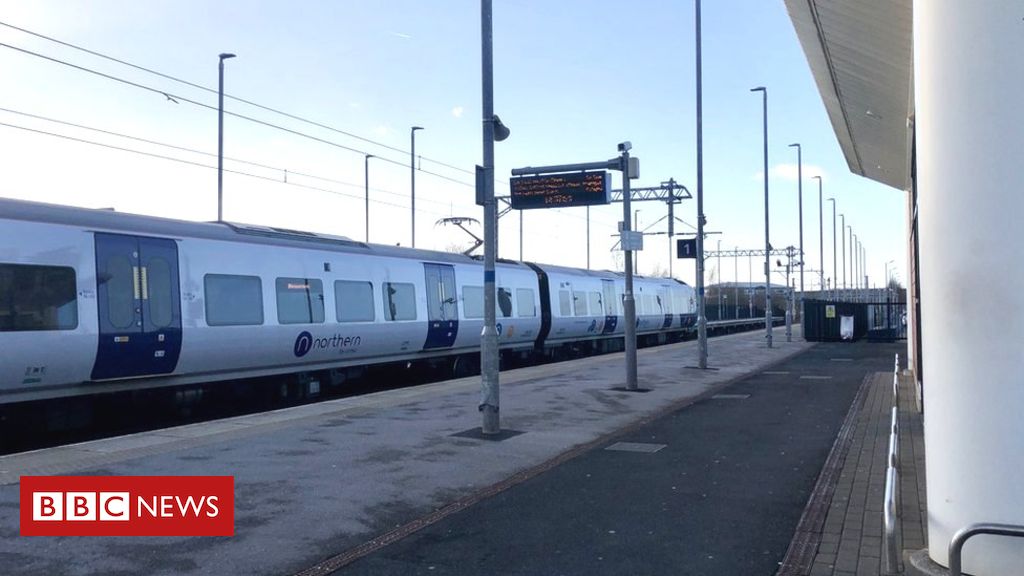 Northern rail passengers have faced chaos since May 2018 when new timetables were introduced. This week a decision is expected from the government on whether the firm will lose its franchise over “unacceptable delays”.

BBC Radio 5 Live has been speaking to people in Buckshaw Village, near Chorley in Lancashire. It’s a place that didn’t exist 20 years ago, but which relies on Northern.

Buckshaw was built on land which was formerly one of Britain’s largest munitions sites, Chorley’s Royal Ordnance Factory.

More than 4,000 people now live there, and many of its residents commute into Preston and Manchester during the day.

The village was designed to be sustainable, and cycle lanes and public transport were integrated into the building plans. A new train station, Buckshaw Parkway, opened in 2011.

Ian Smith, 47, is a civil servant who lives in Buckshaw Village. He takes the early train every morning to Manchester Victoria.

Ian says he loves Buckshaw and its “fantastic facilities”, but says the train service into Manchester is “lacking”.

“We’re running old trains,” he says, “and for the money that you pay for a ticket to go to Manchester, I think the actual service is atrocious.”

For Ian, the main issue is the late running of trains, which delays him arriving at work. He says the information on platforms and apps is incorrect.

“It puts you in a negative mood before you start your day,” he says.

Stacey Worthington lives in nearby Chorley, but commutes out of Buckshaw Village to Manchester where she works in banking. She takes the early train to avoid the rush hour and allow herself to get back in time to pick her children up from school.

“The past two years have not been great,” she says, “I get a half six train and you just turn up and it’s cancelled. Next one’s 10 past seven so immediately then I’m 40 minutes late for work.”

“It’s been better recently with newer trains and more carriages.”

Stacey has a young family and says having to make up the time at work is tricky: “If the train’s late or it’s cancelled, I’m knackered. So I’ve got to then start trying to get after-school care, which instantly costs me £20.”

Alexandra Evans, 38, lives in Buckshaw and is the regional manager for an international telecoms company. She travels a lot with work and her husband works locally – primarily for childcare reasons as Alexandra never knows if her train will get her back in time.

She estimates about 90% of journeys she takes are delayed.

“You have the anxiety of getting to the train station, finding a car parking space, finding a seat… and then walking into the station.

“I’ll be honest the first thing I do in the morning is walk to the board to see if my train is actually on time.

“They don’t understand the impact on somebody’s work day and the stress that’s caused before you even start work.”

Paula Murray, 34, is the manager of the village nursery. She lives nearby but has to be on hand to stay late if any parents are delayed getting home.

The nursery opens early to allow people to get to work but it’s pick-up that’s a problem, because people often don’t have family living nearby.

She said: “Last night when someone was late, we just stayed as long as we needed to really… it can have a massive effect.

“We’ve had [staff] in the years before who’ve missed driving lessons, meals with family.”

Paula is a mum herself and nearly missed a parents’ evening because another parent was late picking up their child: “It can have a massive, massive knock-on effect.”

For Sam Holt, 44, there’s a “feeling of dread” about his commute from Buckshaw Village. He runs a music and DJ management company and goes in to Manchester three times a week.

“It’s a nightmare,” he says, “You can’t rely on the information.”

Sam says when a train arrives on time “there’s almost a collective clapping on the platform because it’s like, hey, it got here!”

He says he now sometimes allows an hour extra to get home, “that’s a decent chunk of your day if you add that up across a working year. That’s a lot of time”.

The unreliability has a knock-on effect for business owners. John Quinton-Barber, 49, owns a PR agency in Manchester city centre with about 30 staff.

He’s put everyone on flexitime, allowing his workers to start from home or clock on later in the day, because he couldn’t rely on people arriving on time due to the late running trains. He says the policy’s been a huge success.

“I don’t want my colleagues being worried that their train is delayed and they have to get in a certain time. I see every day a message from one of my colleagues ‘I’m going to be 10/15 minutes late, because Northern haven’t arrived or because there’s issues with the trains.’

“As an employer, we are taking the heat because of our dysfunctional railway.” He feels frustrated having “to pick up the pieces of a broken Network Rail network in the north”.

A Northern spokesperson said: “Our customers deserve the best possible rail service and we are working hard, alongside our partners, to improve industry performance.

“We have delivered on our commitment to increase the number of train services… and yet there has been no real increase in track capacity since 2016, which has led to more congested railways across the North. Infrastructure issues and the additional congestion have taken their toll on punctuality.

“Arriva and Northern remain fully committed to delivering the transformation of the North’s railways and improving customers’ experience.

“We are delivering the biggest transformation of local rail for a generation, with 62 of our 101 new trains now in service. This is part of a £600m investment in improving customers’ experience; we are also continuing to invest in better stations, better offers for customers and more recruitment.”