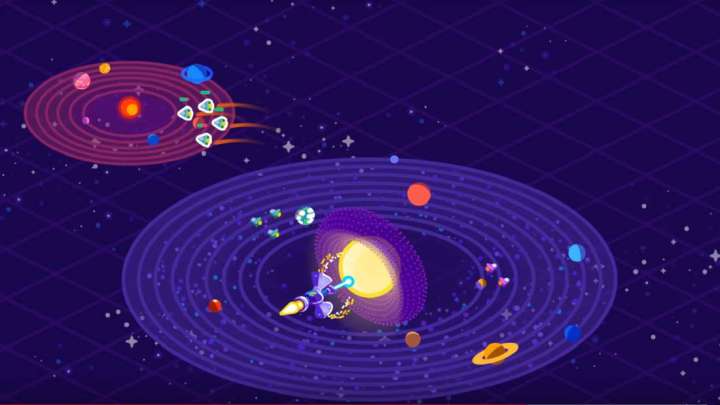 Archimedes stated (correctly) that if he was given a place to stand, he could move the world. But the people at YouTube channel Kurzgesagt – In a Nutshell have greater ambitions; they plan to move the whole Solar System.

In their latest video, they ask a simple yet fascinating question. If the Solar System was moving towards a dangerous part of the galaxy, such as into the path of a future supernova, could it be possible to shift the path that the Sun, planets, and thousands of other bodies take around the Milky Way?

The answer is yes, as long as civilization is advanced enough. To move a star system, one needs a stellar engine to move the star. The planets and the rest will follow along thanks to gravity.

The video focuses on two main types of stellar engine. The first one is called the Shkadov Thruster after the person who came up with it, physicist Leonid Shkadov. The design and the physics behind it are remarkably simple. Photons, the particles of light, have momentum, so they can push stuff about (although it’s just a tiny push).

This approach is what propelled the Planetary Society’s successful LightSail 2 this year and it would be possible to use it to move the whole Solar System. You’d simply need a huge parabolic mirror made of a light and durable material. This would reflect some of the light from the Sun, and in doing so, create a net propulsion using just photons. You wouldn’t get much propulsion though. Over the time it takes the Sun to complete an orbit of the Milky Way (230 million years) you would have shifted the Solar System by just 100 light-years.

A quicker and more versatile approach is an active stellar engine. The Kurzgesagt team doesn’t do things half-heartedly, so they got an actual physicist to design one for them. Professor Matthew Caplan from Illinois State University has published a paper on the topic in the journal Acta Astronautica.

The Caplan Thruster works by taking helium and hydrogen from the Sun using powerful magnetic fields. The helium is fused and the oxygen is expelled, and the hydrogen plasma is accelerated towards the Sun, passing the momentum of the thruster to our star.

This engine requires additional mass to be lifted from the Sun and for this reason, it requires a megastructure such as a Dyson sphere to heat up the region of the Sun just in front of the engine.

The Caplan Thruster can create an acceleration of about 1 nanometer per second squared, which is roughly 10 billion times weaker than Earth’s gravity. But like the tortoise and the hare, constancy is rewarded. That acceleration would produce a deflection of over 30 light-years in just a million years. Enough to avoid a supernova.

You can enjoy these facts and more in the wonderful video below.