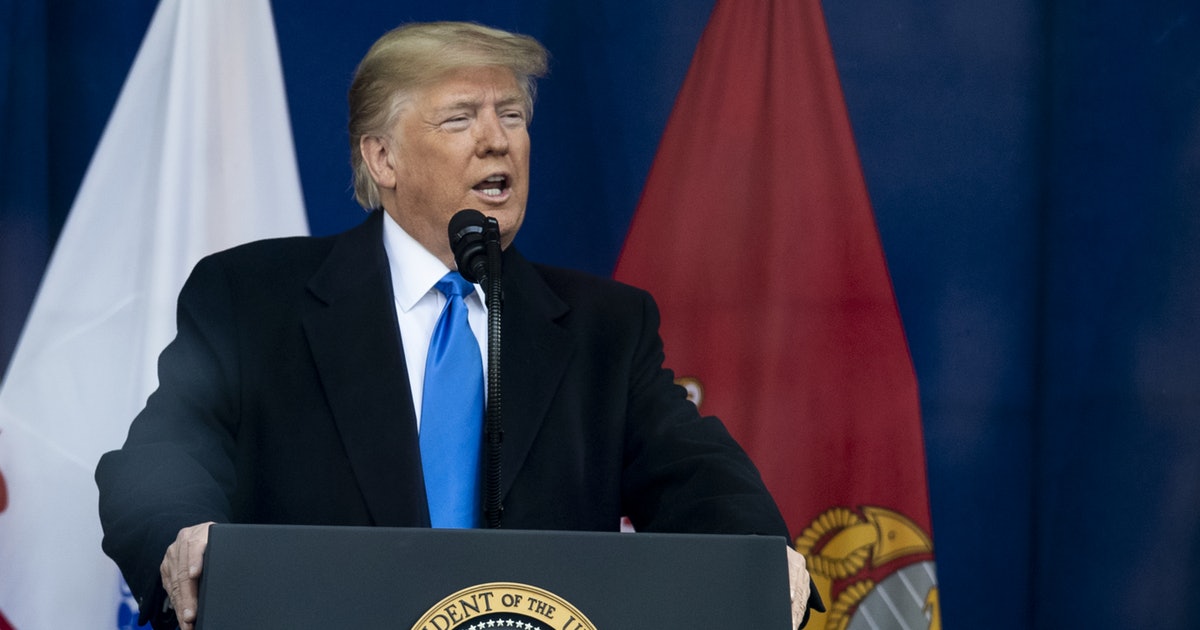 As the House of Representatives gears up for a likely impeachment vote on Dec. 18, President Donald Trump has his own thoughts about the impeachment process. On Tuesday, Dec. 17, Trump sent a six-page letter to House Speaker Nancy Pelosi, in which he suggested that Democratic lawmakers were abusing their power by pursuing his impeachment. With references to the Salem witch trials and his own accomplishments, Trump’s impeachment letter to Pelosi is certainly a wild ride.

Trump kicked off his letter with an impassioned rebuke of the impeachment process. In it, he insisted that Pelosi and her fellow Democrats had “cheapened the importance of the very ugly word, impeachment” and subsequently accused them of violating their oaths of office. (The White House did not immediately respond to Elite Daily’s request for further comment regarding Trump’s letter. Representatives for Pelosi did not immediately respond to Elite Daily’s request for comment on the letter, either.) He then turned to the specifics of the impeachment case against him. On Dec. 13, the House Judiciary Committee approved two articles of impeachment — abuse of power and obstruction of Congress — which Trump in his letter dismissed as “disingenuous” and “preposterous.”

Both of the House’s articles of impeachment pertain to Trump’s July 25 phone call with Ukrainian President Volodymyr Zelensky. The first article focuses on his request that Zelensky to “do us a favor” and investigate the family of his domestic political rival Vice President Joe Biden, and the second focuses on Trump’s alleged efforts to block witnesses from testifying to Congress about his interactions with Ukraine. In his letter, Trump insisted that his call with Zelensky was “misquoted, mischaracterized, and fraudulently misrepresented.” He suggested that because he asked Zelensky to “do us a favor” and “not me,” he was really putting “America’s interests first.” He added that he was exercising “Constitutionally based privileges” regarding the second article.

Trump then went on to attack Pelosi and fellow Democrats including Michigan Rep. Rashida Tlaib, California Rep. Maxine Waters, Texas Rep. Al Green, and House Intelligence Committee Chairman Adam Schiff, many of whom had previously called for impeachment. He suggested that Pelosi had developed a case of “Trump Derangement Syndrome,” and essentially accused her and her party of destroying the country. Trump then proceeded to list what he described as his party’s “record,” which included references to new jobs, a sixth branch of the U.S. military called the Space Force, and even his withdrawal from the Paris climate accord. Trump argued that the Democrats, meanwhile, have obstructed “common sense and common good.”

Trump hyperbolically concluded that “more due process was afforded to those accused in the Salem Witch Trials” than he has received during the impeachment process. He claimed that he had not been given the right to present evidence, have counsel, or call and cross-examine witnesses. Despite these claims, Trump has repeatedly been invited to testify or send lawyers at multiple points in the impeachment inquiry. The White House has declined to participate in the inquiry. The invitations are technically more due process than the Constitution requires: The Constitution actually says very little about impeachment, and an impeached official’s right to a trial comes during Senate proceedings, not House proceedings.

In many ways, Trump’s letter struck a similar chord as many of his tweets, with angry statements about everything from former Special Counsel Robert Mueller’s Russia probe to the nature of the Democrats’ impeachment inquiry. Trump concluded his letter by urging Pelosi to “immediately cease this impeachment fantasy” while simultaneously acknowledging that she probably wouldn’t do so — and in that, at least, Trump is right. Democrats have been gearing up to vote on impeachment for months, and it’s unlikely they will suddenly change their minds.