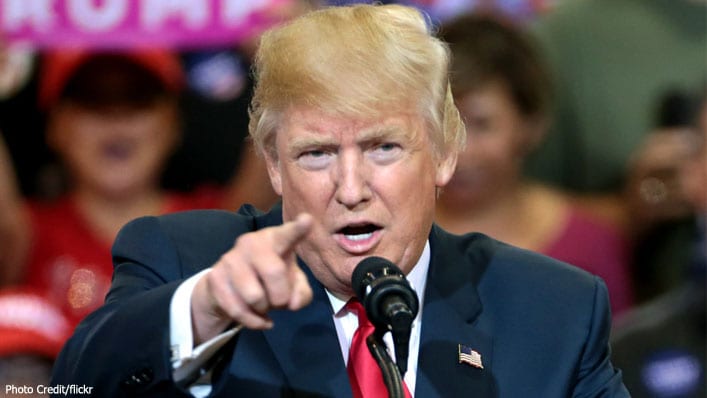 “Don’t judge me by my president.”

These are the words that I muttered under my breath this morning. A broken sentiment to match my melancholy mood. He saddened me, my Commander in Chief, but more than his actions made me wince, was the opinion of his opposition that mattered to me. Most of the time it shouldn’t, but in this instance it did. It had to. We were coming to a point where opinion meant more than meets the eye.

I voted for Donald Trump. God, help me, I did. Southern-bred and Bible-belt brought up, our state ran red, of course it did, but I didn’t vote strictly on party lines. I took a good look at the candidates before me, and I prayed. Oh, Lord, I prayed.

I had felt a whole bunch like Lot. “But what if just ten righteous remain? Will you save us?”

See, I voted the way a lot of Christians voted. To cop the old reliable, “I voted for the lesser of two evils,” stood absolutely true. I mean, at the time I shook my head at both of the main candidates before me. I didn’t want either of them leading my country, the country I had fought and served for during and after 9/11. But when held in front of me, on the scales of awful and more awful, I let life guide me. I sided with the opponent who supported sanctity of life. I went with the man who professed himself as a Christian. Although, at the time, my most commonly uttered phrase was, “well, he certainly doesn’t Christian like I Christian.”

If I only knew. Initially there was excitement, pride even, over my presidential chose being sworn into office. I rolled my eyes at the whiners (I’m just being honest, here), and I wanted to yell from the rooftops, “suck it up!!”

But I didn’t. Do you know why? No, it’s not because I’m perfect, and it’s not because I’m the opposite either. I’m not a two-faced, gossiper, or a hypocrite even. I don’t smile sweetly from the choir while whispering scandalous here-say when you walk away. What I mean is, I had some thoughts. I had some fleshly, unkind thoughts. Hurtful things had been thrown around about my “religion,” and that would make anyone’s quills bristle. People who don’t know any better can be downright mean, but I’ve learned that sticks and stones will break my bones, but words also hurt us. I learned that to be a Christian meant I must somehow be different. I must stand apart. Not on a pedestal, you see, but certainly out of the gutter. So, when insults were hurled my way, I tried to follow the way of Yeshua and turn the other cheek.

I have seen Mr. Trump do a lot of wonderful things for our country since taking office. I’ve seen him boost the economy, defend religious liberty, and support Israel, among other things. One thing I haven’t seen him do, though, is turn the other cheek. Sigh. I get standing firm for what you believe, but he has never stood down.

In fact, I would say that 80% of the president’s actions are quite the opposite of Christ-like. The more he spoke smugly, tweeted in rage, and hurled insults at his opposition, the more I backed into the shadows. I think of that Homer Simpson Meme.

I, too, wanted to hide in the bushes.

See, this is a very hard thing I’m faced with as a lover of Jesus. If taken back in time to the polls, and I had it all to do over again, but armed with my present knowledge, my vote would stand the same. I would still vote for Donald Trump. I guess the only difference is that now I’m ashamed of it.

I’m ashamed because people who don’t know the deep love of Jesus don’t know any better, but those of us who do, we should not be quite so pompously proud of our leader. Y’all, he projects himself as schoolyard bully, and a chauvinist to boot. His actions and remarks resemble the snobby little rich kid in school mixed with the basketball coach that always made you feel uncomfortable. He acts like the guy at your job who would step on his own mom to reach the top, and then he’d go brag with his buddies over beers about it. But that’s not even the worst of it. The worst of it is he’s a Christian! This man accused of deeds worthy of an impeachment hearing is a professing believer in Christ, and to those who don’t know any better, he’s the brightest, highest, most visual example of one. When a non-believer sees Donald Trump, they see you. They see me. He is setting the example for our religion, and I, for one, am pretty disappointed in that regard.

Do I think he’s a good Republican president? Yeah, I think he’s pretty good. There’s been better, but comparatively to the other options out there now, he’s golden. Do I think he has a great head for business and economics? Absolutely. Am I pleased with his policies? I certainly am. But do I offer to share at the lunch table at work that he’s my guy? Uhhh, not so much.

I read an editorial from Mark Galli, the editor-in-chief of Christianity Today (a popular publication for my faith), and it saddened me. You can read it in its entirety here, but I’ll share a bit of what he said below.

To the many evangelicals who continue to support Mr. Trump in spite of his blackened moral record, we might say this: Remember who you are and whom you serve. Consider how your justification of Mr. Trump influences your witness to your Lord and Savior. Consider what an unbelieving world will say if you continue to brush off Mr. Trump’s immoral words and behavior in the cause of political expediency. If we don’t reverse course now, will anyone take anything we say about justice and righteousness with any seriousness for decades to come? Can we say with a straight face that abortion is a great evil that cannot be tolerated and, with the same straight face, say that the bent and broken character of our nation’s leader doesn’t really matter in the end?

His words resounded with me. They were truthful and convicting, and that’s what makes this so hard. I reckon it’s easy to be a Conservative, red, white, and blue supporter of our Republican president as someone who is religious. As in, heck yeah, he believes in God too. But when you start talking about having a relationship with Jesus, one where you study the Word and strive to walk out your faith in everyday life, it’s more complicated. Like, if voting in 2020 was as easy as posting a relationship status on Facebook, I would definitely be categorized as it’s complicated.

As a woman who not only loves Jesus, but also loves His people, it’s hard for me to staunchly support a president who doesn’t walk in love. It’s tough to take pride in a president who has too much of that (pride) all on his own. I don’t know the answers, y’all. I wish I did. I think there’s a lot of Christians (like, the Jesus loving kind) who are in the same boat as me. Thankfully, I’m trying to remember that my boat is not steered by wind and waves alone. Christ is my captain, and our country really needs Him at the helm with this upcoming election. We need His wisdom, guidance, and Divine Intervention. But we also need His love. We need it to permeate and then radiate from whatever candidate the Lord places over us. That is Christianity. Not cruel remarks and bitter backstabs. It is love that shines and encompasses all you are. It’s not us against them. It’s not My President or even Not-My-President. We have to back love, and I, for one, am praying to see more of that come out over the next year instead of the ridiculous politics pervading my social media now.