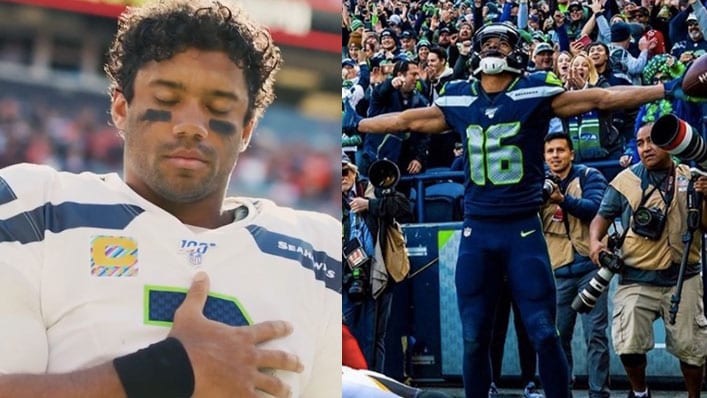 The Seattle Seahawks scored a big victory against the Philadelphia Eagles on Sunday, advancing them in the NFL playoffs. But in spite of their success on the field, many of the team’s star players have been pointing to a priority that far surpasses football: their faith in Christ.

The team’s quarterback, Russell Wilson, has been outspoken about his faith since the beginning of his NFL career, attributing his talent–in spite of his shortcomings–to God.

“God’s given me so much talent, and my height doesn’t define my skill set,” Wilson said in an earlier interview. “I believe that God has given me a right arm, and for some reason, even though I’m 5’11,” to be able to make the throws and make great decisions on the field and all that.”

“For YOUR Glory,” Wilson tweeted prior to the game on Sunday.

For YOUR Glory! 🙏🏾#GratefulHeart

His Christian character following the win was further exemplified by his concern for fellow opponent Carson Wentz, who had sustained an injury during the game. Wilson came up to Eagles head coach Doug Pederson, asking him if Wentz was okay.

Russell Wilson went up to Doug Pederson postgame and asked if Carson Wentz was okay.

Tyler Lockett, a wide receiver for the Seahawks, is another player who is fueled by his faith and relationship with Jesus.

God gets all the Glory! Forever and always! https://t.co/zF8hPWmsye

“The one thing that keeps you going is to have faith in God and that Jesus came and died for everything,” Lockett told CBN News. “He’s given you the things that you need to live a fulfilled, thankful life!”

In a ‘Letter to God’ posted to Instagram in November, he wrote, “This time I won’t let the blessings you give me take me away from you! You forever got me. And I’m here to stay!”

A Letter to God This time I won’t let the blessings you give me take me away from you! You forever got me. And I’m here to stay!

Wide receiver DK Metcalf also points to God as the sovereign orchestrator of his life and football career. Even when he got injured in 2016–ending his college football season early–his faith in God’s plan did not waver.

“When I got hurt, it hurt me,” admitted Metcalf. “It hurt me really bad knowing that I couldn’t play anymore, but I looked at it as God does everything for a reason. I looked at it as He wanted me to get better in another aspect of the game. So, I wasn’t sad about it, I went to rehab every day.”

After his injury healed, Metcalf went on to play pro football.

“God gave me another opportunity to play so I’m just going to live it up to the fullest,” he said.

The wide receiver now uses his public platform to spread the Gospel and the goodness of God.

“I look at football as a platform to help other people or to spread the word of God,” said Metcalf. “I put my faith in God, my trust in God and that He’s blessed me each and every day to play the game of football. Me spreading the Gospel through football is how I look at it.”

On their hopeful journey to a potential Super Bowl appearance, it’s admirable to see this band of brothers spread the light of a God that shines brighter than any championship ring.