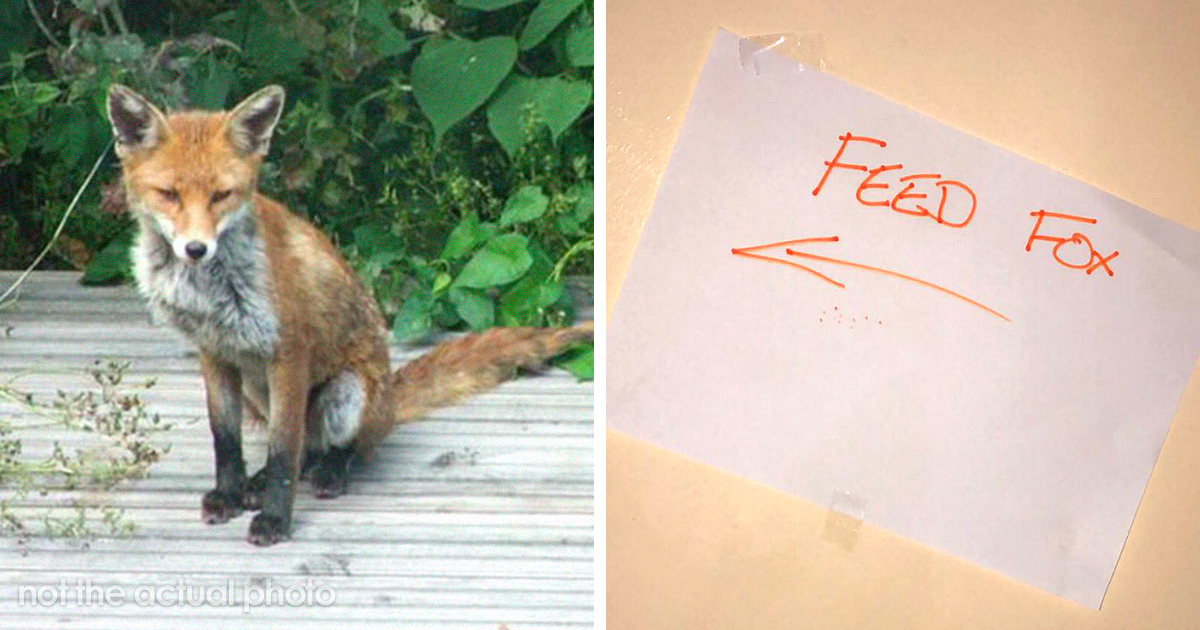 We all know that dads might say that they might not want to have a pet, but they quickly fall in love with them. Like one dad who freaked out when he lost his daughter’s hamster. Or all the dads who have ever said they don’t want a dog but ended up best pals with them.

In this case, we’ve got a great foxy story for you. A story about a dad and his newfound love for a wild fox. Amy MacMillan from East Kilbride, Scotland, shared that her dad has “lost the plot” because he adores his new fox friend so much that he’s feeding it extravagant meals (and expecting everyone else to do the same).

Not only that, he hung up a schedule for divine food to be left out for the fox by the family while he’s on holiday. True friendship between a man and a fox? Or a tad over the top? That’s for you to decide, dear Pandas! The fox eats better than some students we know The wild fox has been experiencing gastronomic delights for the past few months now. Amy’s dad feeds it two meals per day: dinner and supper.

The choices for dinner are chicken or chicken drumsticks. While for supper we have an excellent selection of dog stick chews with a handful of biscuits to accompany them. With the culinary attention this fox is getting, you’d think it was related to those food-loving, constantly-ravenous hobbits from ‘The Lord of the Rings.’

Amy even bought her dad a fox keychain in case he misses his wild fox buddy on his holiday. Naturally, he sent her a photo where he’s attached it to his backpack.

Ma pal just sent me this am lost for words pic.twitter.com/hBeYs44p55

Like any other wild animals, foxes can cause some problems in civilized areas. For example, they’re known to raid trash cans, mark their territory, and dig up flower beds. And they can even gobble up smaller pets.

So if you want to keep your chrysanthemums and pet bunnies safe, the first thing you need to do is not leave food outside for foxes.

You also need to have trash cans made of tough materials that also have tightly secured lids, so that animals can’t get in. And if you absolutely have to keep small pets in your backyard, use welded mesh, not chicken wire for the enclosure.

What do you think of Amy’s dad’s friendship with the fox, dear Readers? Do you think that it’s fed well enough, or is that just the right way to treat any foxy-buddy? Do you think that Amy’s dad will keep feeding it after he comes back from holiday? Share your thoughts with us in the comments.

Twitter users adored the friendship between the man and the fox