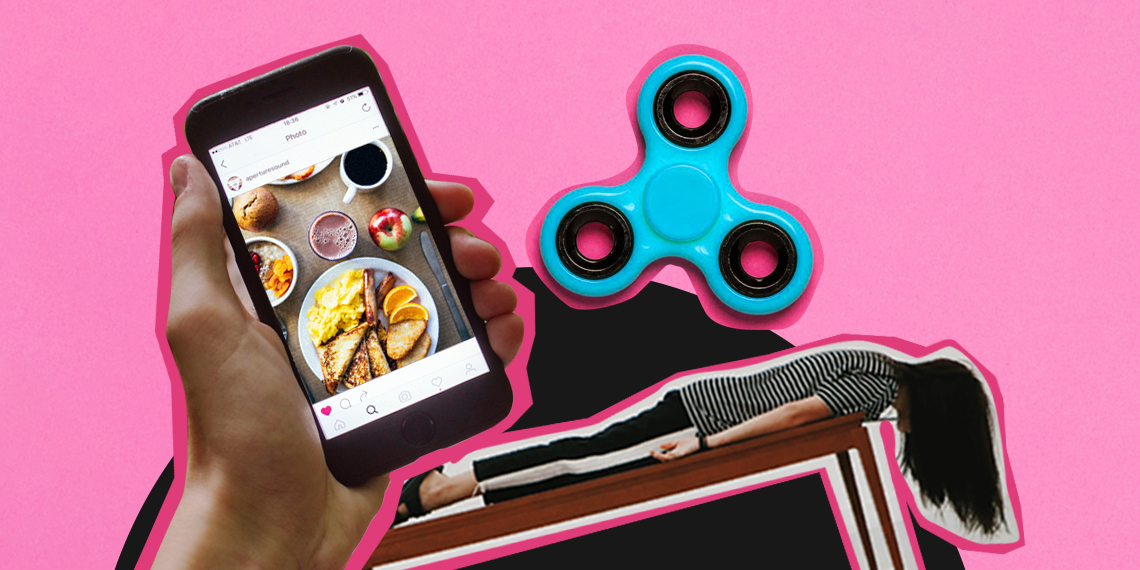 By now, you probably know that the decade is about to end. Yeehaw, we made it. And while it’s fun to look back on the crazy sh*t that celebrities or The Bachelor contestants did this decade, it’s even more interesting to think about what we, the normal people, did in the 2010s. We already looked at the worst wellness and fashion trends of the decade, and uh, oof. Today, let’s look back on some of the ridiculous fads and trends that became a thing, and thankfully also stopped being a thing, this decade. 10 years is a long time, and there have been some major rough moments. None of us are making it out unscathed.

Eating For The Insta

I never understood "eating for the insta" ? Like I'm eating it because my body physically needs 17 meals a day & because its in front of me

Considering how ubiquitous Instagram has become, it’s easy to forget that it didn’t even exist at the beginning of this decade. *Takes 10 hours to ponder my existence* We’ve seen a lot of Instagram trends come and go since its inception, but perhaps the one I’m most glad to see in the past is everyone caring way too much about their food pics. There’s nothing wrong with taking pictures of your food and posting them every once in a while, but we’ve moved past the era of every single girl pretending she’s a food blogger and making a huge scene before anyone at the table is allowed to take a bite. These days, if I’m ever out to eat and someone shouts “the phone eats first!!!”, I slap their iPhone out of their hand.

Okay, so while many people still spend more time editing their photos than it took me to write this article, thankfully most of us are no longer using 12 Instagram filters and grainy effects on our photos. Facetune is an epidemic, but at least we’ve realized that the toaster filter isn’t flattering on literally anyone. The same goes for fake lense flairs, unnecessary use of black and white/sepia, and those weird effects that make your photo look like a piece of film. What the f*ck even was that?

I literally had to triple check because I didn’t believe it, but planking became popular THIS DECADE. Who said time flies, because they were mistaken. I never got into this trend, and I still don’t understand why it became a thing. Is there anything more cringe than that one friend’s dad who got super into planking, and would post pictures on Facebook of himself balancing on like, a motorcycle or some sh*t? People are so weird.

if I had a dollar for every time someone tried to mansplain bitcoin to me, I could probably afford a bitcoin

Much like planking, I still have basically no idea what Bitcoin actually is. For a few months in 2017, cryptocurrencies were basically all anyone could talk about, and if you didn’t have at least 10 different dudes mansplain Bitcoin to you, congrats, you’re an outlier. Since 2018, demand for Bitcoin has dropped, in part due to hacks and other security concerns, and, I would guess, also in part because people realized they can just buy legal things with like, normal money. If you’re buying gifts for me, I’m a big fan of good old Benjamins.

Remember the summer of 2013 when everyone got yik yak, and all hell broke loose

If you weren’t still in college during the brief, problematic fever dream that was Yik Yak, you probably have way less to talk about with your therapist. Basically Yik Yak was like an anonymous, location-based Reddit, where people could say whatever they wanted and get upvoted or downvoted. The app quickly exploded on college campuses, and it was a lot of fun, until threats and hate speech started getting an uncomfortable amount of upvotes. The app also made its way into high schools, which was even more of a disaster. Imagine getting outed on Reddit, but then everyone at your school sees it. Hard pass for me! The app was shut down in 2016, thank god.

As adults with jobs and responsibilities, most of you probably don’t stay super up to date on the latest fads in toys. Somehow, fidget spinners slipped through the cracks, and adults and kids alike became obsessed with flicking these dumb little things around on their fingers. I never owned one myself, but I’ll admit, they’re kinda fun. Still, there’s no reason for everyone to be going about their business in the world attached to a toy 24/7, so I’m glad this was a passing craze. Just download solitaire on your phone like a goddamn adult if you need something to distract you from your responsibilities.

I could’ve written a whole article on the dumbest slang of the 2010s. Just a few of the ones I don’t miss are on fleek, being shook, and getting litty titty, but none of those could hold a candle to getting turnt. It’s just… so bad. Of course, there’s the issue that turnt was never a real word to begin with, but the bigger issue is with how it’s used. By that, I mean that everyone used it all the time, whether it was supposed to be ironic, or they were actually talking about getting drunk. I don’t even want to know the amount of sh*tty apologies that included the words “too turnt,” but thankfully we’ve moved past this as a society.

Wow, this makes me feel old. Throwback to 2011, when nothing was more terrifying than waking up after a night out to a notification that “*insert name* tagged you in 14 photos.” And the photos were NEVER GOOD! After surviving the era of uploading absolutely everything to Facebook, it’s a true miracle that any of us got accepted to college, or got jobs, or literally have rights. These days, Facebook albums are pretty much a thing of the past, except for your one married friend who posts photos of her kid every. single. day. Hey Maggie, you don’t have to do that!