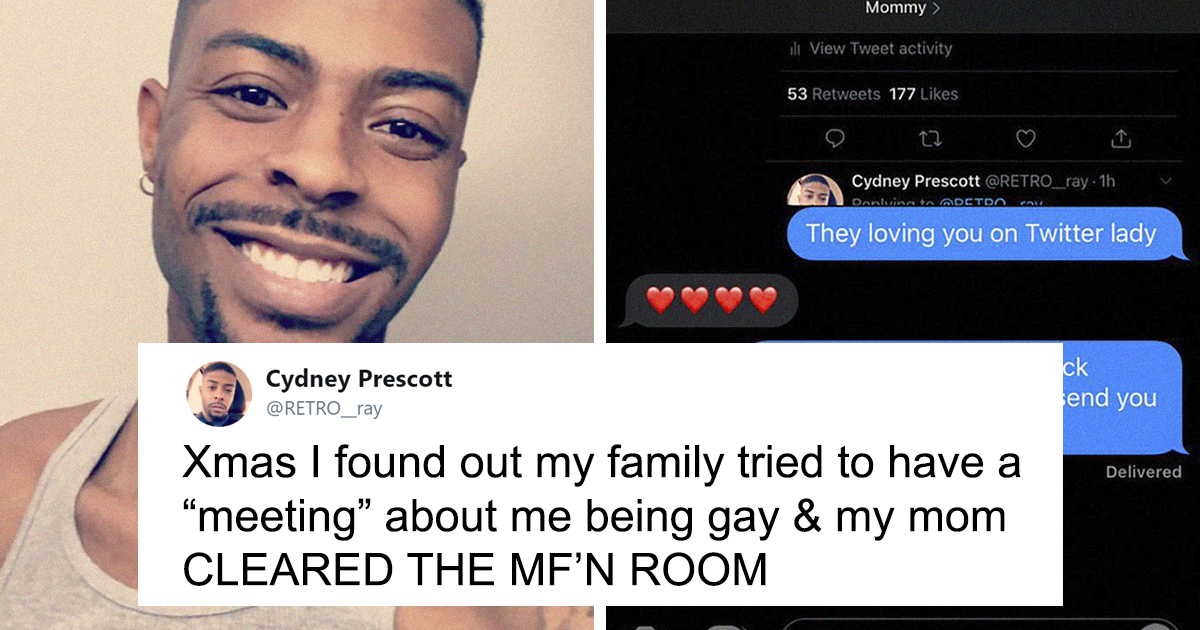 The holiday season is the time of year when you, for better or worse, reconnect with your family. One young man, however, just experienced both ends of the spectrum. When Cydney Prescott was celebrating Christmas, he got to feel the resentment of his relatives and the absolute power of his mother’s love. Needless to say, the latter won.

You see, Cydney’s extended family held a ‘meeting’ to discuss his being gay. While it’s hard to even imagine what one could talk about in such a… gathering, his mom was having none of it. She interrupted the homophobic folks and cleared the room, letting everyone know that she won’t tolerate such insulting nonsense. Not one bit.

Cydney immediately told the internet what happened. In just a matter of days, his tweet has received nearly 300K likes and 3.4K comments, many of which were applauding his mom and her unconditional love. The man passed the good words to his hero, and she couldn’t be happier to hear about it as well!

Cydney Prescott’s homophobic family almost ruined his Christmas, but his mom was determined to stop them Many LGBTQ individuals say that coming out to their family is one of the hardest things they had to do in their lives. However, disclosing your sexual orientation to family members is becoming increasingly common among sexual minority youth. According to one study, 79% of sexual minority youth had disclosed their sexual orientation to at least one parent, and two-thirds of youth had disclosed their orientation to at least one sibling and one extended family member.

And although being LGBTQ is becoming more acceptable in the Western world, some still can’t react positively to it. People may find it difficult to take on new information about someone because they don’t fully understand what it means to be LGBTQ. Johns Hopkins pediatricians and adolescent medicine specialists Renata Arrington Sanders and Errol Fields shared a few steps parents (and other relatives) can take to keep kids happy and healthy.

“Time and time again, we hear the same thing from patients: ‘Once my parents are behind me, I can handle anything else the world throws at me,’” Dr. Fields said. “You’re their anchor, and your acceptance is key. In fact, research shows that LGBTQ adolescents who are supported by their families grow up to be happier and healthier adults.”

But that doesn’t mean you have to be an expert in all LGBTQ things. “There’s no right or wrong way to express love,” Dr. Sanders added. “Just be present and be open.” Even when you’re not sure what to say, something simple like, “I’m here for you. I love you, and I will support you no matter what” can mean the world to any kid.

Of course, getting kids to open up can become quite a challenge. Dr. Sanders and Dr. Fields said the best way to do this is to build trust and start small. Be curious about their lives. This includes getting to know their friends and what they like to do. Think about asking them how their day went and if they learned anything interesting in school. Arm yourself with patience and don’t be discouraged.

Sometimes it’s OK to be stressed, confused or surprised. However, don’t give up. “Some parents feel so overwhelmed that they just throw up their hands and say, ‘I can’t do it.’’ It’s a lot for parents to process, but don’t leave your kid in the lurch,” urged Dr. Sanders.

“Remember, your child is having more difficulty with this than you are,” Dr. Fields said. Teaming up with a pediatrician, a counselor at school, close family members and even community organizations is a great way to keep at it.

After his thread went viral, Cydney told his mom all about her internet fame While people continued to react to the story, Cydney clarified a few things