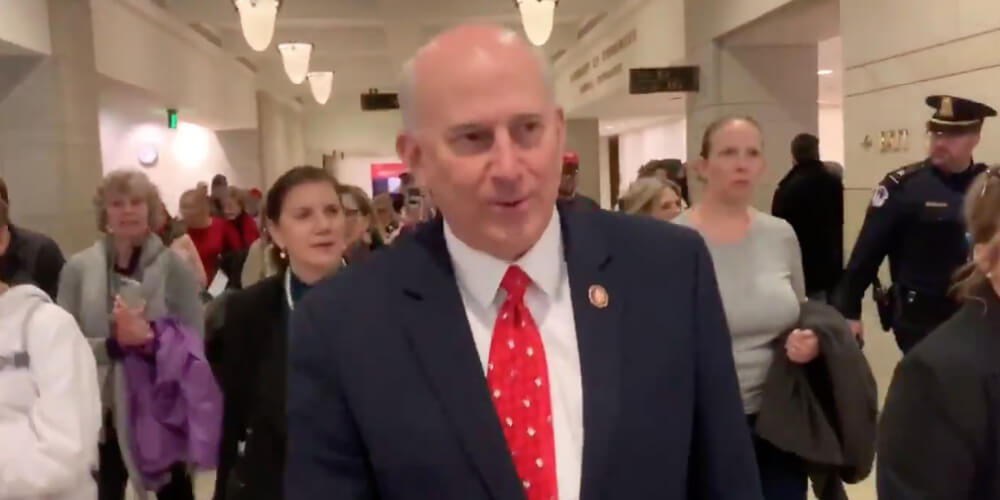 I love fracking in the morning, an Oklahoma couple, who own a fossil fuel company, stated as they spoke with the Daily Dot about why they made the trek to Washington, D.C., for an anti-impeachment protest on Friday.

Around 65 anti-impeachment protesters slowly gathered in the halls of the Willard Hotel in downtown before embarking on their procession to the U.S. Capitol, where they rallied against the two articles of impeachment against President Donald Trump. The protest was organized by Women for Trump.

Im out here walking with the @WomenforTrump in the rain talking to them about what they call the impeachment sham. They arent happy with @LindseyGrahamSC or the deep state. pic.twitter.com/VLDUjq4UjB

Headliners for the rally were none other than two Trumpworld pundits, one of which was Jack Posobiec, whos known for supporting conspiracies like QAnon and Pizzagate.

Posobiec was also accompanied by Will Chamberlain, a self-described lawyer who spoke of how the president was exonerated.

Will Chamberlain, a Trump world character, and publisher of Human Events, says Trump is exonerated… pic.twitter.com/NzTuoifatt

Posobiecs speech was overshadowed by Twitter users having a field day with his coat, which was possibly going to be returned after the march as it was still donning its tags.

Pizzagate conspiracy theorist, Jack Posobiec is out here with a coat it looks like he might be returning… pic.twitter.com/HGLItbRjeX

When asked by the Daily Dot about his new coat and the tags hanging out of it, Posobiec stated his wife bought the coat as a Christmas gift for him.

Banana Republic headquarters, the clothing retailer where the coat was seemingly from, did not respond to the Daily Dots multiple requests for comment.

A manager at a Banana Republic store in Washington, D.C., told the Daily Dot that there is a 45-day return period. The manager stated the coat would have to be assessed by a manager while warning it should be dry before being returned (it was raining at the time, but Posobiec and his coat were protected by an umbrella).

When the Daily Dot asked about his new comic book, Posobiec claimed we must have phone tapped his early morning conversations about it.

You got a FISA on me, the conspiracy theorist added.

Protesters then aimlessly drifted around the Capitol, eventually making it to the Capitol visitors center, where the group was greeted by Rep. Louie Gohmert (R-Texas), who guided them into the Longworth House Office Building (LHOB) to aid them in protesting at House Speaker Nancy Pelosis (D-Calif.) office.

.@dailydot EXCLUSIVE: Rep. Gohmert on @WomenforTrump demonstrators showing up against what they call the impeachment sham. pic.twitter.com/xJloawth3e

Attempting to trigger Pelosis staff, the protesters yelled, Merry Christmas on their way out of the office.

Impeachment protesters pile into @SpeakerPelosis district office… on the way out they yelled, Merry Christmas… pic.twitter.com/hVljWdVuxx

Demonstrators then targeted House Judiciary Committee Chairman Jerry Nadlers (D-N.Y.) office, where they attempted to get in but failed. The door was locked, and Capitol police informed the pro-Trump group that Nadlers office has every right to do so.

In an interview with the Daily Dot, Amy Kremer, a Women for Trump co-founder, explained how the group was not only upset with Democrats but also with Sen. Lindsey Graham (R-S.C.).

We are upset with Lindsey Graham, and the reason is [that] he has subpoena power in the U.S. Senate, and hes not exercising that power to get to the bottom of what went on with the deep state and Russian collusion, Kremer stated.

In October, Women for Trump traveled to Washington, D.C., for a similar march, which the Daily Dot also covered. They protested impeachment proceedings and touted the conspiracy that a bus company refused to drive them around because of their political affiliation.

It was later discovered they simply failed to pay the bus company.