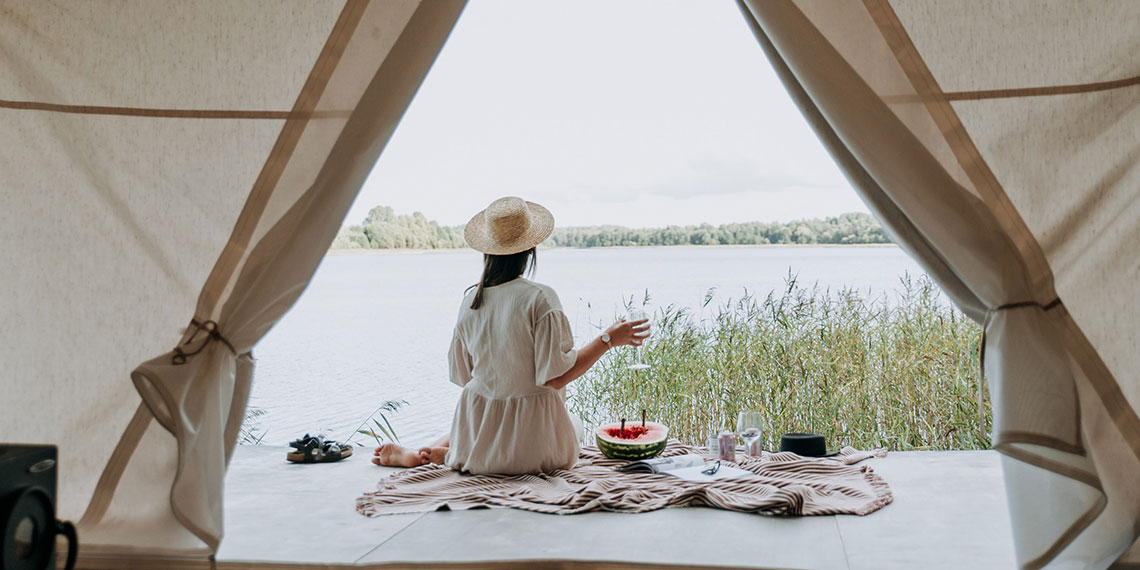 Blame the millennials for making camping glamorous (you can thank us after you actually get a good night’s sleep in the woods). It’s become so mainstream that “glamping” now has its own space in the dictionary. Glamping is for the people who call themselves outdoorsy but are too high-maintenance to pee in the woods. When you go glamping, you’re not racing to pitch a tent by yourself before night falls and sleeping in sleeping bags on the dirt ground, but you do still get to embrace the elements (or at least, you can claim you did on Instagram). You get all the comforts of being at home, like sleeping on an actual bed, and sometimes a bathroom, electricity, and hardwood floors, but you can still technically say you slept in a tent (or similar structure that lacks walls).

I traveled across the pond to Fforest, where I went glamping for a few nights in Wales to escape reality for a minute and be one with nature. I was set up one of their half domes that kind of look like the tents set up at Fyre Festival, only much, much nicer. It had a solid wood floor, wood-burning stove, and even an onsen hot bath. While it does make for the perfect photo, there’s more than meets the eye. This is what it’s like to actually go glamping, most of which you won’t find on social media.

There’s No Cell Service, Which You’ll Learn To Love

And as you can imagine, there’s no Wifi either. Answering emails or stalking your ex on social media aren’t in the cards on this trip. Just you and Mother Nature. And honestly, it’s for the better. When you’re trying to escape your everyday, your phone is a huge part of that (don’t lie). When you fully unplug mentally and physically, then you can really embrace what’s right in front of you.

Although accommodations are much fancier than regular camping, basic survival skills still come into play, like building a fire. Pro tip: peeling the bark off the logs is a great way to get that initial flame… so I wouldn’t advise you to get your nails done before your trip. Ripping up newspaper works too if you’re out of bark. You’ll know when you need to remake the fire when you wake up freezing in the middle of the night.

It’s not a 5-star hotel experience, even though it may look like it, but the thing is, it’s not meant to be. It’s still camping, don’t forget that. Instagram sometimes can be misleading because all it shows are the luxury shots, and not muddy shoes, soaked clothes, or little creatures that you might find. But that’s all part of the experience. While I’m not going Amish any time soon, going glamping taught me that I can survive with less and that I’m not as materialistic as I thought I was.

Be One With Nature And Namaste, Y’all

Glamping allows you to really unplug and experience this entirely new environment. On the campsite I got to actually get to know other glampers because no one had their phone as a giant wall of a distraction. I did activities organized by Adventure Tours UK that I wouldn’t think of doing at home, like foraging for wild leaves and fruit in serene Wales, with which we made our own herbal tea. Yeah, I’m basically Bear Grylls. You can’t rely on Google Maps out there, but instead you actually use a paper map (an ancient artifact people used to use as a navigation tool back in the day) and your brain instead of having a voice instructing you on exactly which steps to take.

It Gets F*cking Cold

The fforest rustle #15 is out Looking back at the year of events, it’s a feast for the eyes full of lovely photographs. See the link in profile for the full story 👆🏼 #fforest #stayplaydream #visitwales

It doesn’t matter if you’re staying in Wales or a desert, it gets cold at night, so be prepared. Making a fire is essential, but also water bottles that you can fill with hot water to warm your bed are a lifesaver. At one point in the night I put my heaviest fleece on because I was so cold and still went, half asleep, to rebuild the fire. Bring layers and even hand warmers to stay warm.

I Know It’s Corny, But Don’t Forget To Look Up

We’re gonna miss this place but are leaving inspired, recharged and excited to put into practice everything learned over the past few days. Thanks to all our @fforest friends for making every visit here so special ✨

Away from the big city, the stars are unbelievable. Your iPhone can’t capture the magic, so don’t even try—just enjoy it, IRL. I’m not a scientist, but the skies are so clear you can see the big dipper and other constellations without a telescope. For people who don’t live in a city, that might be every night for you, but if you live in New York or another big city, you probably haven’t seen an actual star since 2012. From my half dome in Wales, though, I could look up at the stars from my bed, with the fire burning, a cup of hot chocolate in my hand, and I felt like that was all I needed in this simple life.

As fancy as glamping can be, at the end of the day it’s still camping. It’s funny sometimes that as advanced as we are as a society and as plugged into our social media as we are, we crave the urge to go into the middle of the woods, disconnect, and leave it all behind. Because sometimes nothing beats Mother Nature, except for like, being in Mother Nature without actually being all the way in it.