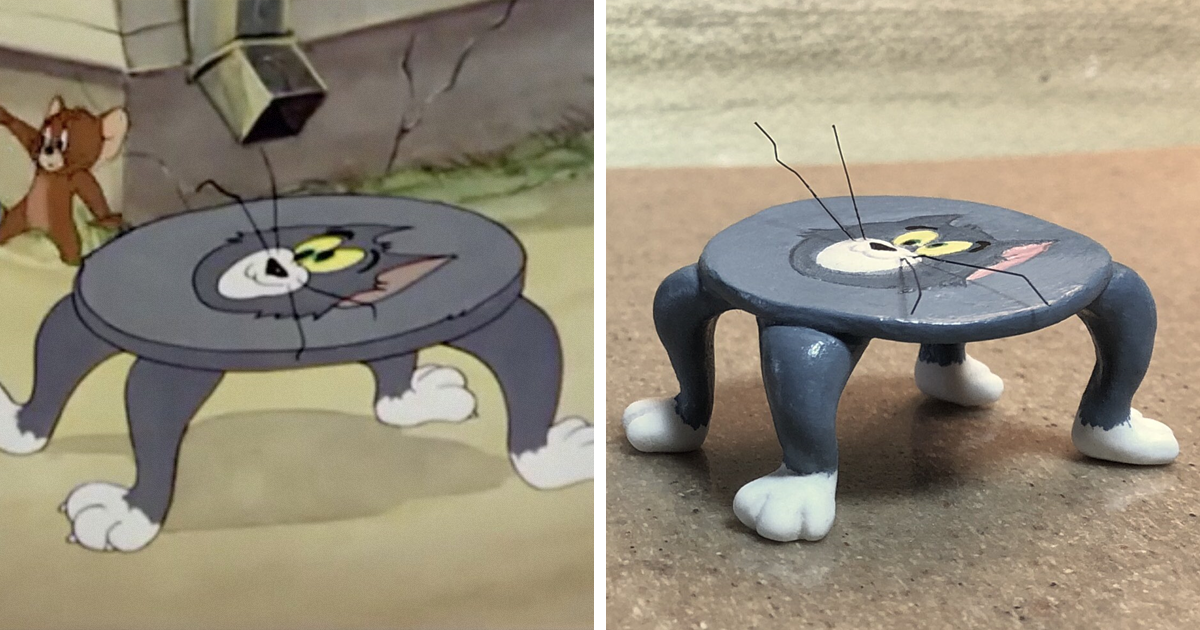 I think it’s safe to say that we want to forget our dumb actions. Especially if they made us look like complete idiots. However, some of us couldn’t even if we tried. Like Tom and Jerry.

The famous American animated series follows Tom’s attempts to capture Jerry and the mayhem and destruction that follows. Tom rarely succeeds in catching Jerry, mostly because of Jerry’s cleverness, cunning abilities, and luck. But they both suffer in the process. And I’m not even talking about bruises or broken bones. Tom, for example, can get his head bashed with a frying pan so hard, thė impact reshapes it into the pan itself.

But one man’s pain is another man’s gain. These gut-wrenching moments have become quite the inspiration for Japanese artist Taku Inoue. As we showed you in our earlier post, Inoue has been turning Tom and Jerry’s bad luck into playful little sculptures, capturing all the hilarious poses the characters find themselves in. “Tom and Jerry” was created in 1940 by William Hanna and Joseph Barbera. Interestingly, when the first animated short hit the theaters, the cat and mouse duo were actually named Jasper and Jinx. The episode showed Jasper, a tomcat, enjoying the harassment of a mouse by the name of Jinx. It also featured Mammy Two Shoes (Jasper’s owner), scolding and punishing Jasper for his naughtiness. It’s quite unexpected that even though the show had 163 animated shorts in total, this first episode, titled “Puss Gets the Boot,” is the longest one, with a runtime of nine minutes and eight seconds (9:08). In fact, when Barbera pitched the idea of a cat-and-mouse series, none of the Metro-Goldwyn-Mayer employees were really psyched about it. They thought the idea was too common when it came to cartoons, and simply boring. After the first episode was released in theaters, both Hanna and Barbera even went on to work on other, non-cat-and-mouse projects. It was only about a year later that the first animated short of Tom and Jerry gained some popularity, and the two creators were brought back to work on the series. Hanna and Barbera produced 114 “Tom and Jerry” shorts for MGM from 1940 to 1958. During these years, they won 7 Academy Awards for Best Animated Short Film. The MGM cartoon studio closed in 1957, but the company revived the series, with Gene Deitch directing an additional 13 shorts for Rembrandt Films from 1961 to 1962. It was at this time when “Tom and Jerry” became the highest-grossing animated short film series, overtaking “Looney Tunes.”