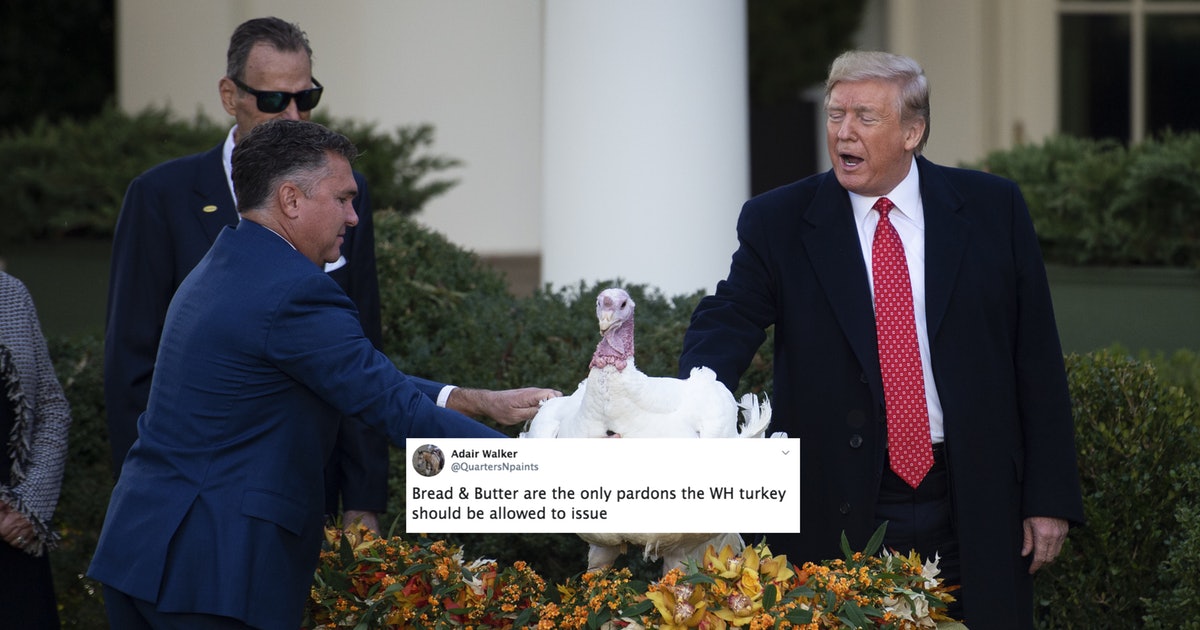 These Tweets About The 2019 White House Turkey Pardon Roast Trump, Not Turkeys

It’s official everyone: the holiday season is upon us. On Tuesday, Nov. 26, the White House hosted a traditional event with friends, family, and a couple of turkeys. Bummed you couldn’t see it for yourself? Well, President Trump’s roster of jokes caught Twitter’s attention, so check out these tweets about the 2019 White House turkey pardon, because they’re pretty ruthless.

Even though the turkey pardon is supposed to be a lighthearted affair, Trump quickly made it political. Trump brought up House Intelligence Committee Chairman Rep. Adam Schiff of California, joking that the turkeys had received subpoenas to appear in Schiff’s basement on Thanksgiving Day. Trump then cracked another joke saying the Democratic Party is “accusing” him of “being too soft on Turkey.” Trump also threw some minor shade at the public impeachment inquiry hearings that took place during the week of Nov. 18. “Bread and Butter, unlike previous witnesses, you and I have actually met,” he joked.

On Twitter, lot of people’s minds went right to the July 25 phone call between Trump and Ukrainian President Volodymr Zelensky, in which Trump asked Zelensky for a “favor” and to investigate the family of Vice President Joe Biden, Trump’s domestic political rival. While a non-verbatim transcript of the call confirmed the two had talked about Biden, Trump has denied any wrongdoing. The White House previously characterized the impeachment inquiry as Democrats’ attempts to “weaponize politics” in a statement to Elite Daily.

The annual turkey pardoning, while an undoubtedly weird tradition, has a long history. According to Politico, President Abraham Lincoln granted an unofficial pardon to a turkey that his son had grown close to after being delivered to the White House. George H.W. Bush made the turkey pardoning an official annual tradition once he took office in 1989.

Presidents have traditionally used the lighthearted event to have some fun, and usually make a bunch of groan-worthy turkey-themed jokes. President Barack Obama, in particular, clearly delighted in “embarrassing [his] daughters with a corny-copia of dad jokes about turkeys,” as he said in 2016.

Trump has kept the annual White House turkey pardoning going, but he tends to give his jokes a far more pointed tone.While publicly pardoning last year’s turkeys Peas and Carrots, on Nov. 20, 2018, Trump threw some shade at the Democratic Party during the festivities. “Even though Peas and Carrots have received a presidential pardon, I have warned them that House Democrats are likely to issue them both subpoenas,” Trump said. So, it looks like he might be reusing some old material.

Even though the White House turkey pardon is usually just fun and games, leave it to Trump to bring politics into the mix. Until next year!