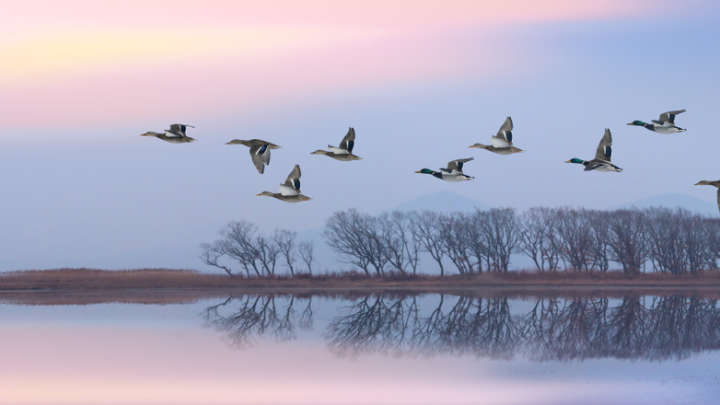 Migratory bird species whose route passes over the continental US are changing the timing of their movements in response to climate change, new research suggests.

A collaborative team of researchers observing the nighttime migratory behaviors of hundreds of “critically important” bird species found that migration timing and temperature are closely aligned with the greatest changes to migratory habits occurring in the regions that are warming the fastest. Birds who migrate in the springtime are more likely to pass by certain areas later in the year than they were two decades ago.

To determine whether birds are altering their migration habits, researchers at Cornell, Colorado State University (CSU), and the University of Massachusetts (UMass) at Amherst turned to 24 years of weather radar data from the National Oceanic and Atmospheric Administration (NOAA) and the National Weather Service. A specially designed machine-learning tool known as “MistNet” capable of differentiating birds from rain on images was able to crunch the data in just 48 hours.

“Historically, a person had to look at each radar image to determine whether it contained rain or birds,” noted Dan Sheldon of UMass Amherst in a statement. “We developed ‘MistNet,’ an artificial intelligence system to detect patterns in radar images and remove rain automatically.”

These timing shifts were shown to be less apparent in the fall. This may be because “bursts of migrants” in the springtime are pressed to reach their breeding grounds – a pressure that ceases in the fall as birds move at a “slower, more punctuated pace” to reach their winter grounds. Migratory birds play a crucial role in ecosystems, but as climate change impacts vegetation blooms and insect breeding, these changes may affect birds traveling through familiar territory under unfamiliar circumstances.

“Bird migration evolved largely as a response to changing climate,” said Andrew Farnsworth of the Cornell Lab of Ornithology. “It’s a global phenomenon involving billions of birds annually. And it’s not a surprise that birds’ movements track changing climates. But how assemblages of bird populations respond in an era of such rapid and extreme changes in climate has been a black box. Capturing scales and magnitudes of migration in space and time has been impossible until recently.”

The shifts observed show that migrating birds are not necessarily keeping pace with climate change. Writing in Nature Climate Change, the authors believe that their work is among the first studies to examine how climate change impacts the timing of bird migration at a continental scale.