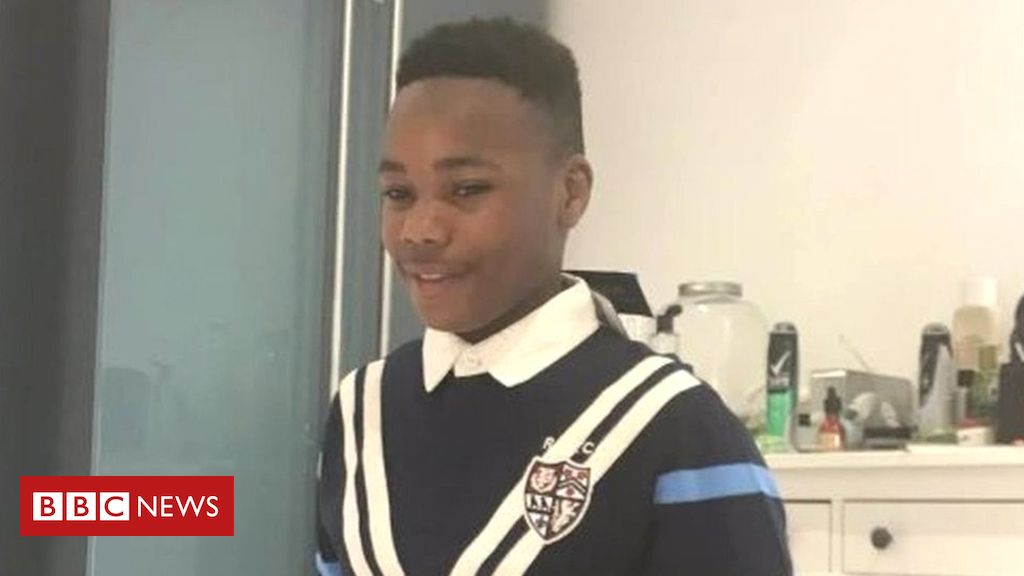 A man has been jailed for murdering a 14-year-old boy in a “savage, frenzied” attack in east London.

Jaden Moodie was knocked off a moped and repeatedly stabbed by rival gang member Ayoub Majdouline in Bickley Road, Leyton, in January.

Majdouline, 19, of Wembley, was sentenced at the Old Bailey to life with a minimum term of 21 years.

As Jaden’s family left court, his father Julian Moodie said he was happy with the sentence, adding: “British justice has been done.”

Sentencing Majdouline, Judge Richard Marks said he could not “ignore the evidence” about Jaden’s drug dealing and other criminal-related history.

“That he became so involved, starting at the age of 13, is truly shocking but none of that means he deserved to die, still less in the circumstances in which he did,” he said.

Majdouline was one of five men linked to the stabbing who drove around east London in a stolen Mercedes looking for members of a rival gang to attack on the night of 8 January, the court heard.

The group, linked to drug gang the Mali Boys, had covered their faces and two of them, including Majdouline, wore yellow rubber gloves to avoid being identified.

The killing was caught on CCTV, which was shown at the trial.

Once the group spotted Jaden, he was knocked off his moped by the car.

Gang members then got out of the car and stabbed him while he lay on the ground.

Jaden, who was dealing drugs for rival gang the Beaumont Crew, suffered nine stab wounds and bled to death in the road as the attackers ran back to the car and sped off, the court heard.

There were emotional scenes inside courtroom number 10 in the Old Bailey, as the family of Jaden Moodie listened to the prosecutor Oliver Glasgow QC reading out the victim impact statements they’d written in the wake of Jaden’s murder.

His mother Jada had described how he’d wanted to become a mechanic as he was “besotted with bikes and cars” and how he’d also liked to dress smartly, leading to a plan to set up his own brand called Young Productions.

“How do I live without him since this terrible barbaric attack… he really was a remarkable human being,” she wrote. “At his tender age he showed empathy for humanity.”

Jaden’s sisters also described their heartbreak and how they were now scared to go out and had nightmares about what had happened.

And while one person has now been jailed for murder, others suspected of involvement in the attack are yet to be brought to justice.

In a victim impact statement, Jaden’s mother Jada Bailey said her son was a “loving and caring, family-orientated little boy” and described his murder as “barbaric”.

Ms Bailey said she felt “let down” by organisations she had turned to for help.

She told the BBC she had complained to social services about her son being groomed by gangs, and moved 140 miles from Nottinghamshire to east London to escape trouble.

“I feel like all this could have been avoided,” she said.

“No parent should have to bury their child before themselves.”

Majdouline had a “non-existent childhood” and was particularly traumatised by the murder of his father, the court heard.

Three years after his father’s death, he was identified by the National Crime Agency as a victim of “modern slavery”.

His lawyer James Scobie QC told the court: “He had significant disruption by experiences of trauma and exposure to certain ideologies that no-one of any age should be exposed to.”

Giving evidence in the trial, Majdouline said he had turned to county lines drug dealing “to survive”.

Det Insp Dave Hillier said the Met Police’s “work is not over yet” and the investigation was still live.

“We know that there were five people in that black Mercedes,” he said.

“After deliberately ramming Jaden off his moped, his attackers did not think twice about carrying out a savage, frenzied attack on him – stabbing him nine times in seven seconds while he laid defenceless on the ground.”