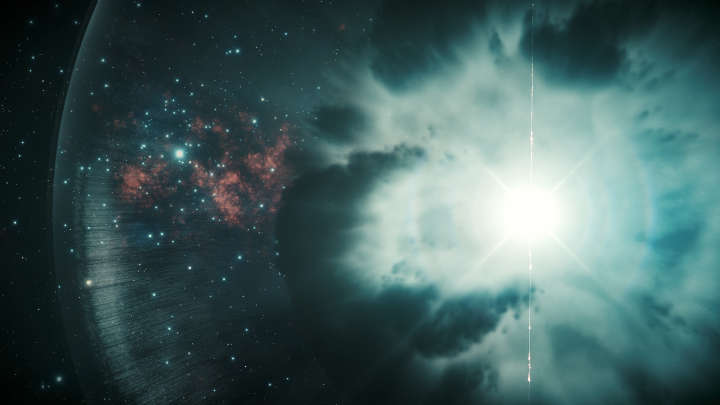 Over the last two years, gamma-ray observatories have spotted something incredible. Astronomers detected the brightest light ever recorded coming from the universe, reaching about 100 billion times the energy of a single photon of visible light.

This incredible light was produced by gamma-ray bursts (GRBs), a rare cosmic event that features a short and incredibly powerful explosion. In three new papers published in Nature (here, here, and here) researchers detail the observations of two of these events: GRB 180720B and GRB 190114C.

The 300+ scientists in the international collaboration detected photons emitted during the events and in the afterglow and they had energies higher than 100 gigaelectronvolts, with some being up to 10 times as energetic. This is certainly not a common unit of energy, but to give you an idea, a flying mosquito has roughly that amount of kinetic energy. Compress that into a single photon, and you get an idea of just how powerful that is.

“Gamma-ray bursts are the most powerful explosions known in the universe and typically release more energy in just a few seconds than our Sun during its entire lifetime,” David Berge, head of gamma-ray astronomy at Deutsches Elektronen-Synchrotron (DESY), explained in a statement.

These observations are also the first detections of gamma-ray bursts by ground-based gamma-ray telescopes, the Fermi Gamma-ray Observatory and the Neil Gehrels Swift Observatory, and were only possible thanks to the collaboration of the different teams on different instruments.

Once a GRB is observed, an announcement is sent out to telescopes across the world to conduct follow up observations. For GRB 180720B, the High-Energy Stereoscopic System (HESS) in Namibia was in the wrong part of the planet at the time to see it and had to wait 10 hours, but got to study the powerful afterglow of the event.

For GRB 190114C, the MAGIC (Major Atmospheric Gamma Imaging Cherenkov) telescope on the Canary Islands was able to observe the event within 50 seconds of the alert, catching the afterglow of the GRB – which took place 7 billion light-years away from Earth – at the very beginning of its emission.

“We were able to point to the region of origin so quickly that we could start observing only 57 seconds after the initial detection of the explosion,” said Cosimo Nigro from DESY, whose observation shift it was at the time. “In the first 20 minutes of observation, we detected thousands of photons from GRB 190114C.”

There are still many unknowns when it comes to GRBs. The ones studied in these observations are known as long gamma-ray burst as they are longer than 2 seconds but shorter than 10,000. Evidence suggests that they are caused by incredibly massive stars going supernova leaving behind a black hole.

The incredible energies reached by the photons are due to a process called Inverse Compton Scattering. The photons in the emission are originally low in energy but they get bumped by electrons moving close to the speed of light. The electron loses energy this way, which is then carried away by the photons.

“Much of what we’ve learned about GRBs over the past couple of decades has come from observing their afterglows at lower energies,” said Elizabeth Hays, the Fermi project scientist at NASA’s Goddard Space Flight Center. “Now, thanks to these new ground-based detections, we’re seeing the gamma rays from gamma-ray bursts in a whole new way.”