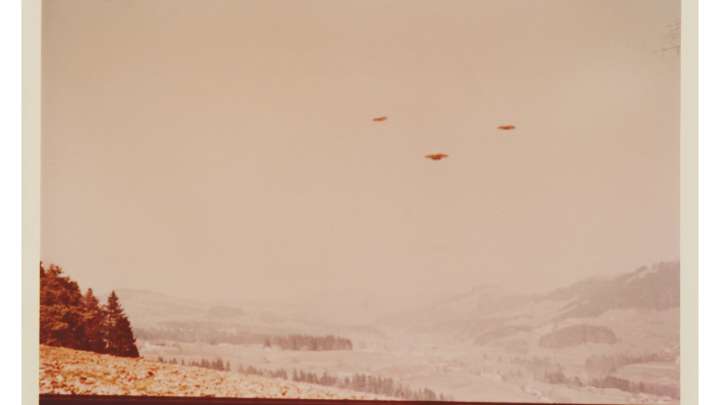 One of the most notorious groupings of alleged UFO images can be yours for the cool price tag of just a few thousand dollars.

The images were captured by self-proclaimed prophet and UFO religion founder “Billy” Eduard Albert Meier in the spring of 1975 in Switzerland. Born in 1937, Meier is one of the most well-known “believers” in modern history and claims that he was contacted by extraterrestrials in childhood and on-and-off throughout the decades. He also claims to be the seventh reincarnation after six prophets that feature in Judaism, Christianity, and Islam.

Three groups of his photographs are currently up for auction at British auction house Sotheby’s, each of which contains between four and seven photographs. Sotheby’s notes that the series of photographs are among the “most highly publicized and well-documented images of UFO phenomena ever recorded”. In the first batch, three UFOs are seen hovering over the mountains of Bachtelhörnli, Switzerland during the morning and evening of March 28, 1976.

The second group includes one image that was made famous after its three-season appearance in the “I Want to Believe” poster featured in The X-Files television show, which hung in the office of FBI Special Agent Fox Mulder. Though it was replaced in the fourth season after Meier brought on an intellectual property suit, a 2016 reboot of the series again featured the poster following Meier’s permission. Two images show a single UFO moving slowly over the town of Berg Rumlikon on June 14 at 1.16 pm and 1.20 pm, as well as four images that depict a UFO flying over a forested area of Schmidrüti on March 18 at 4.45 pm to 5.40 pm.

Four photographs make up the third group, two of which show a single UFO moving slowly over a wooded area of Winkelriet-Wetzikon in Switzerland on March 18, 1975, at approximately 9.08 am and another taken later that afternoon. Another image was allegedly captured on June 15.

The photographs were investigated by US Air Force pilot Lt. Col. Wendelle Stevens under the top-secret program, Project Blue Book, the longest-running UFO investigation ever conducted by the US government. After his retirement, Wendell and a team of private investigators researched the images at labs, including the NASA Jet Propulsion Laboratory, in order to determine their authenticity. The images are largely believed to be a fraud by skeptics, despite recent research that contends their authenticity.