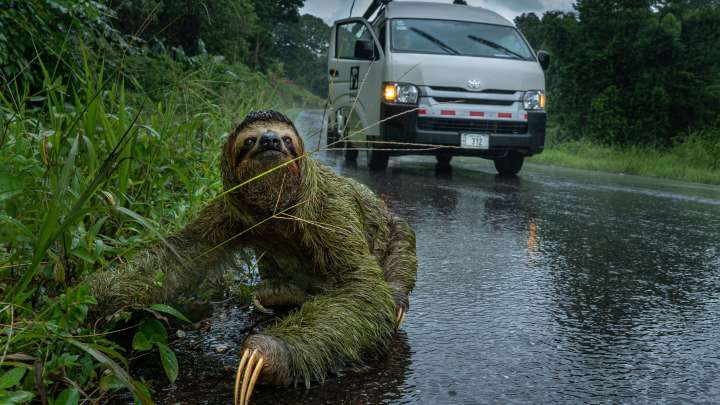 From the Birch forests in Belarus to the darting rivers of northern India, the 2019 British Ecological Society (BES) photo competition winners delicately capture the “vibrancy and intimate detail” of the world around us. Submissions from 1,200 BES member ecologists from more than 40 countries celebrating the diversity of flora and fauna found around the globe will be presented later this month in Belfast. Until then, IFLScience has compiled the photographs to take you on a tour of our planet.

During his visit to Madagascar, Roberto Garcia Roa says that he used an external red light to brighten and blur the environment surrounding this Malagasy tree boa.

“Unfortunately, many areas of Madagascar are suffering huge anthropic pressures including poaching and fires, and big snakes are becoming increasingly difficult to see. During my visit to Madagascar, I had the pleasure of finding this outstanding snake and photographing it,” he said in a statement emailed to IFLScience.

Sanzinia madagascariensi is a non-venomous snake found only in Madagascar, but is becoming increasingly difficult to find due to human threats like fires and patching.

“This stunning image not only captures the beauty of the Malagasy tree boa, which is endemic to the island of Madagascar, but also its vulnerability, especially to hunting and fire. A remarkable image and deserving winner,” said BES president Richard Bardgett.

Nilanjan Chatterjee captured this highly specialized male plumbeous water redstart (Rhyacornis fuliginosa) in Rishikesh, India as it was looking for insects that live in and around the gushing waters of northern India.

The highly compacted cocoons of leafcutter bee (Megachile sp.) larvae are shown in their intricate nests made from specially cut leaves. Pigmentation of the eyes indicates the insects are nearing the end of their metamorphoses.

A nocturnal Colombian cloudy snake (Sibon nebulatus) is pictured in the Central American jungle as it awaits its next meal.

With eyes literally larger than its stomach, a small Malays spider is photographed by Roberto Garcia Roa as it captures a much larger ant.

Are You Seeing The Same As Me? By Pablo Merlo, Category Winner, Dynamic Ecosystems

Quite the majestic duo, a cow and Chimango (Milvago chimango) look out over the dramatic landscape of Beagle Channel in Argentina.

A scorpion found in Madagascar glows fluorescent under UV light. It is still unclear as to what function fluorescence plays in nature, but it is found in a variety of species.

A harlequin frog (Atelopus spurrelli) in lives on the ground of Colombian rainforests amid leaves and sticks.

Thawing Away By Gergana Daskalova, Student Winner, People And Nature

A human form can be seen in the distance of Qikiqtaruk-Herschel Island in Canada. Thaw slumps from increasing temperatures in this Arctic landscape form this dynamic and ever-changing landscape.

“During my stay in South Africa, I was fortunate enough to be involved in the horn trimming of four Southern White Rhinos. Rhinos have their horns trimmed annually to help prevent them being killed. It was an amazing experience and one I will never forget,” said photographer Molly Penny.

An aerial image shows the amount of equipment required to photograph the Arctic ecosystem on Canada’s Qikiqtaruk-Herschel Island.

For The Love Of Flamingoes By Peter Hudson, Category Winner, The Art Of Ecology

“Flamingoes are all legs and necks but at the same time graceful and fascinating and I admit I have a deep passion for them, so I was thrilled when, flying high over Lake Magadi, I watched this flock form themselves into a heart shape,” said ecologist Peter Hudson.

“Mycena’s feed on dead wood and litter, so I could move the mushroom attached to the bark so I could easily photograph it,” said photographer Sanne Govaert.