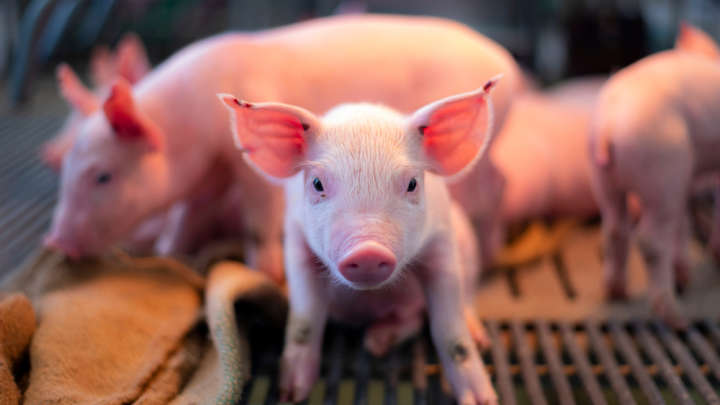 Scientists in China have successfully brought to term piglets injected with monkey stem cells for the first time, bringing researchers one step closer to one day growing human organs inside of animals.

The pig-monkey chimeras – an organism derived from two or more zygotes, or the eukaryotic cell formed during fertilization that contains essential DNA – were born in the Chinese lab Key Laboratory of Stem Cell and Reproductive Biology and looked otherwise normal.

Scientists derived embryonic stem cells from crab-eating macaques, or cynomolgus monkeys, a species commonly used in and bred for biomedical research. These cells were genetically modified to produce a fluorescent protein called GFP so that the researchers could track the cells after injecting them into pig embryos. (Pigs are “excellent hosts” because of their similarities to humans.)

Only two out of the 10 altered piglets were chimeras even though the team implanted more than 4,000 embryos. Of those, the monkey cells were spread in tissues across several vital organs such as the heart, liver, spleen, lung, and skin, and only represented a low proportion of overall cells – somewhere between 0.1 and 0.01 percent, according to New Scientist.

“We believe this work will facilitate future developments in xenogeneic organogenesis, bringing us one step closer to producing tissue-specific functional cells and organs in a large animal model through interspecies blastocyst complementation,” write the study authors in the journal Protein and Cell.

All 10 piglets died within a week of birth from an unknown cause. The researchers believe that their death may be due to an issue with the in vitro fertilization (IVF) process rather than chimerism given both chimeric and non-chimeric animals died.

Human stem cells can self-renew and regenerate, making them potentially capable of generating human organs in mammals for future transplantation through a process called xenogenesis. Mouse trials have been relatively successful in producing chimeric organisms, but the method is much more complex in humans both for biological and ethical reasons. The US and Western Europe forbid types of experimentation that use human cells and have largely begged the question: where does society draw the line on humanity? In 2017, the Salk Institute in California created pig-human chimeras with one-in-100,000 cells being human. However, the experiment was shortly shut down due to ethical rules requiring that the embryos not develop for more than a month due to concerns that the brain could be partly human.

In the natural world, chimerism is extremely rare in humans, with less than 100 cases documented, including a 1953 report in the British Medical Journal of a woman who had two types of blood – a result of her twin brother’s cells living in her body. A 1998 report described a male human who had partially developed female organs after being conceived via IVF.

The researchers say they will continue to attempt creating healthy animals with a higher proportion of monkey cells. If successful, they then hope to create pigs with one organ composed of almost all primate cells.