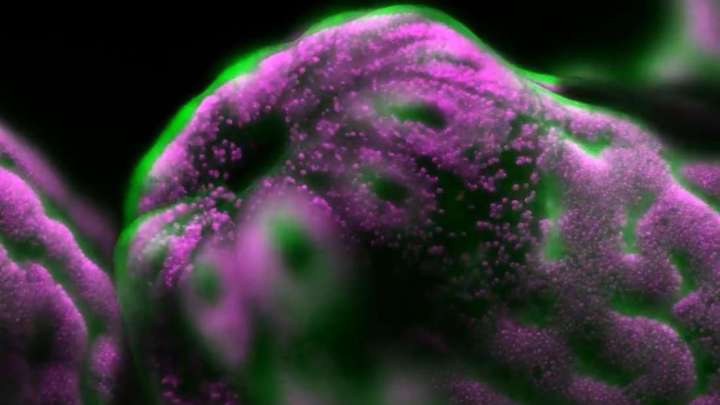 From cannibalistic tardigrades to snoozing skeleton shrimp, the winners of the Nikon Small World In Motion Competition have been announced, offering a fascinating glimpse into the rarely seen world of the oh-so-very-small.

Now in its ninth year, the Nikon Small World in Motion is the video component of the long-standing Nikon Small World still-photography competition, whose winners were announced back in October. The video arm of the competition was added in 2011 in response to new technology that opened up the field to recording movies or time-lapse photography through a microscopic lens.

The top prize was handed to Dr Philippe Laissue, a biologist and assistant professor at the University of Essex in the UK, for a stunning video of a polyp emerging from a reef-building staghorn coral.

Most reef-building corals contain photosynthetic algae, called zooxanthellae, that live in their tissues as part of a mutualistic relationship; the coral provides the shelter and components needed for photosynthesis, while the algae provide the oxygen.

In Dr Laissue’s winning video, we get an intimate glimpse into this relationship, with the algae (colored in magenta) shown inside the coral. Not only is this an important process to document given the threat of climate change to coral reefs, but it’s also extremely difficult to capture because corals are extremely sensitive to light.

“I am fascinated by their otherworldliness and beauty, and have been working on imaging them for several years now,” Dr Laissue told IFLscience.  “With gentle fluorescence microscopy, we can collect important information about what is happening on the cellular level when corals react to different environmental conditions. This helps us to better understand corals and their development, thus contributing to finding the best strategies to protect and conserve them.”

“In the beginning, I used conventional fluorescence microscopy techniques, which damaged my coral samples, or didn’t produce very useful images. So I got a small Royal Society grant to make a bespoke light-sheet microscope, which uses very little light and keeps the coral happy.”

Second prize was awarded to Dr Richard Kirby for his video of Vampyrophrya, a type of parasite, swarming around the body of their host, a dead microscopic crustacean known as a copepod.

“The video shows single-celled ciliate parasites escaping from the dead body of the marine copepod they infected, the free parasite will now infect another copepod. Copepods are a pivotal link in the sea’s food chain and so these prevalent parasites are likely to be a major influence on the flow of energy in the marine ecosystem,” Kirby told IFLScience.

“To most people, the microscopic plankton is a secret world beneath the waves. I made this film to show that the plankton world is as complex, intricate and fascinating as any other on Earth.”

Tommy and Jesse Gunn earned third place for their video of a Stylonychia (microorganism) using its cilia to create a water vortex, hoping to sweep up its next meal.

You can see the top five winners, along with a bunch of honorable mentions, in the montage video above. You can also check out some of the previous years’ winning videos here and here.

Editor’s note: Tom Hale was one of the judges for the 2019 Nikon Small World competition.