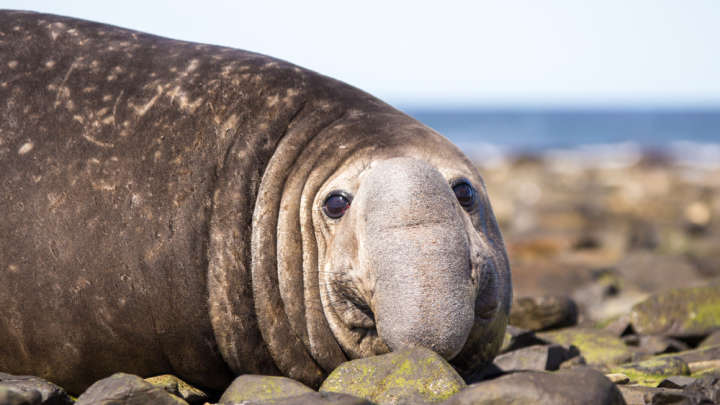 A southern elephant seal, a marine mammal usually found in the icy waters of Antarctica, has been spotted along the balmy coastline of Sri Lanka for the first time.

While the unexpected visitor has been welcomed in Sri Lanka, its presence in tropical waters may be a cause for concern.

The juvenile southern elephant seal was spotted on November 20 on Dalawella Beach near Unawatuna on Sri Lanka’s south coast, reports Mongabay. Locals and rangers from Sri Lanka’s Department of Wildlife Conservation managed to capture some footage of the distant traveler after receiving a tip-off from the Sri Lankan Navy.

Asha de Vos, PhD, a marine biologist who specializes in studying blue whales in Sri Lanka, was keeping tabs on the elephant seal and tweeting updates on its condition. On November 23, she noted the individual was still in Sri Lank and appeared to be “resting but also injured.” Unfortunately, the seal has not been spotted since Saturday and its whereabouts are now unknown.

The southern elephant seal is the world’s largest species of seal, with males growing up to 4 meters (13 feet). They are also known to dive to extreme depths, up to 2,100 meters (6,890 feet), which is pretty impressive for a marine mammal. They get their name from their unusually large nose and their vast body size. It’s unknown if this seal is a male or female as its size suggests its a juvenile, and males don’t develop their trunk-like nose until reaching sexual maturity, and females don’t have them.

They can be found in three geographic subpopulations in sub-Antarctic and Antarctic waters. The largest subpopulation is in the South Atlantic, while the other two reside in the sub-Antarctic islands of the Pacific Ocean and in the southern stretches of the Indian Ocean.

One of the nearest populations of elephant seals to Sri Lanka can be found on Kerguelen Island. Although that’s over 6,200 kilometers (3,890 miles) away, it’s possible for an elephant seal to make this journey with the help of ocean currents. Why it made this journey, however, remains a mystery.

“Seals are active swimmers, but it’s hard to speculate why this individual swam this far north, leaving its native range. The individual found in Sri Lanka looks exhausted and would have reached the beach for some rest,” de Vos, told Mongabay.

Although it’s the first time the species has been documented in Sri Lanka, they have been known to stray into the Northern Hemisphere. A study in the journal Marine Mammal Science explains that fishers shot dead a southern elephant seal off the coast of Oman on the Arabian Peninsula. The report also cites previous sightings in Mauritius and the Seychelle Islands.

Elephant seals are not considered threatened as their numbers are healthy, but conservationists are keeping an eye on the increasing lack of ice habitats on which they breed for any future threats.