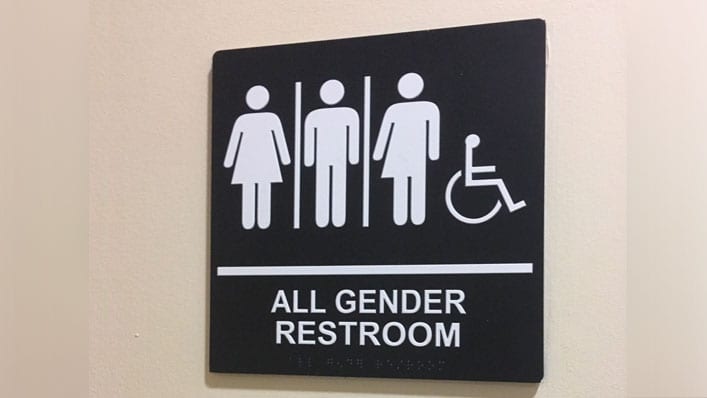 I saw this sign outside of a public bathroom in the downtown Orlando area recently, and while I’m sure it’s commonplace in metro areas, it’s actually the first time I had seen this particular pictogram in person. I wasn’t the only one; my nine-year-old daughter also inquired of its meaning.

“What’s that mean, mom?” She asked, pointing to the half-dress, half-slack clad person.

I measured my words carefully and answered, “there are some people who may not be sure if they’re a girl or a boy. That’s a private bathroom just for them.”

And that was the end of it, for her anyway. I, on the other hand, have thought back on it a time or two. I felt like God was prompting me to speak on this sign, but I was hesitant. See, I have a lot of friends, from many different backgrounds, from all over the world, with varying beliefs, and the last thing I wanted to do was hurt a friend. I believe in speaking truth, but I also believe in not causing pain.

But still, the nudge continued. So I asked myself, “is it possible for a Bible-believing follower of God to talk about the trans community without judgment, but in truth, with love, and in a way that conveys the Father Heart of God?”

Y’all, our world is changing, and it’s changing quickly, right before our eyes. Parents who try to shield their young children from homosexuality will find that difficult if they turn on their television at all, take their kids out in public, or even enroll them in school. You see, what was once taboo is now commonplace, and what might have been hidden merely twenty years ago, is now celebrated. The world is changing, and I think it’s possible to keep up with that without burying yourself in a time capsule underground.

I don’t claim to know everything. I can’t find my keys sometimes, much less the concrete answer to all of life’s dilemmas, but I do know where I go to try and figure it out. I go to God’s Word. There’s a whole lot in there, y’all, and it’s easy to pick out one scripture for our use at the moment without drawing from the truth of others. It’s like our Bible has become a Google search engine, and we enter in a single word, like one word is what makes a person who they are, and we aim that scripture at the issue. For example, you can easily find what the Bible says in regards to homosexuality, but you can utilize that verse without also carrying the commands like found in Corinthians to “do everything in love.” We can ignore the ones we don’t want to hear, like the one that says if you get divorced and remarry you’re guilty of adultery. Well, here I stand an adulterous woman.

When I looked at the depiction of half a woman and half a man, I didn’t feel anger. I didn’t feel righteous indignation as a Christian woman. Instead, I felt sad. I felt sad for a human heart that wasn’t sure who to be. I felt sad that it has to be that way. I believe in the Bible where it says God knew us in our Mother’s womb, and that He knew us before we were even formed. In that belief, I don’t think God would create specific physical parts but then place a different spirit within that same body. I just don’t. But then (I’m a nurse, after all) I’m reminded of babies that are born with both male and female sex organs. I’m reminded of babies born with deformities of all kinds. Would a loving God do that?!

I think that’s the sin part. This world is far different from the one He created in the Garden of Eden. When sin entered the world, it changed everything. We brought on ourselves sickness, deformity, and sadness. Along came wickedness and people who hurt others. Mothers who don’t care if they neglect their children or harm them physically. Fathers who aren’t really fathers at all. Not like God intended them to be anyway. Fathers who wound their children physically, mentally emotionally, and who raise young men to continue their vicious, poisonous cycle. Sin brought us children who don’t know who they are, adults who can’t decide who they want to be, and people who change who they are hoping that becoming someone else will bring them love.

Love. That is what we are all lacking. When I can’t figure out how to approach a situation, even after reading God’s Word for guidance, I stick to love. The greatest command.

Love makes me cherish the young man who feels better dressing like a young woman. I certainly know that’s how God sees them. He isn’t standing on a cloud up high glaring in anger, posed to throw a lightning rod and holler, “I made you a boy!”

God sees the things we cannot see. God sees the heart of us all. He sees where we hurt, where we feel broken, and where we feel empty. After all, we are all cracked, vacant vessels eager for His love. Those of us (like myself) who have suffered with sexual immorality or alcoholism know all too well how feeling that need for something (love) can make us fill our vessel with whatever we can to feel better. Some fill it with food, becoming morbidly obese. Some fill it with drugs, ruining the lives of everyone close to us. Some will run through numerous relationships and marriages searching to cure the ache. Some will push people away, surrounding themselves with cats, and denying the need for human interaction at all. How about the wealthy man who builds his life on his pursuit of more? Is it not an idol in his life that actually breaks the Ten Commandments?

If only we could. It’s a sin issue, and this world is full of it. We are a broken people just struggling to feel like we’re worth something. The liar lies to make themselves sound better. The man leaves his wife to try and make himself feel happy again. The effeminate young man seeks a partner who will make him feel adored. We ink our skin (three tattoos here), we get plastic surgery (yep, guilty), and we dye our hair (got me again). We put on what makes us feel beautiful, maybe for the first time ever.

I’m not saying this is a sin, or this isn’t a sin; I’m saying it’s all sin. This world is chock-full of it. From the moment we get out of bed until we breathe our last breath, we’ll battle it. Every single person on this planet. It’s not just a sin issue, though. It’s an issue of lack. From the moment sin separated us from God we became lacking, and we’ve spent the last forever trying to make ourselves not feel that way. Thankfully, it’s not just sin that changed everything. Jesus came along, and He changed everything too! He’s that bridge to close the gap, and the best way to usher in His presence is to follow His greatest command He gave us. Love.

I don’t want the first reaction people to perceive of me as a Christian to be one where I start highlighting sin in their life. I want them to see the Father Heart of God, and then He can lead them to His truth. That’s what He did with me. It’s what He does with me still! People will never be filled of their empty places by throwing them a Book of the Law, but they will be filled by the Holy Spirit’s wondrous love. And as you fall deeper in love with the Father, the desire to follow His laws come.

Even then, we will not find our complete and total wholeness until Jesus comes back. We can get closer (I’m living proof), but we won’t find all that we lack until Heaven. It’s a sin issue, and we are a busted, broken bunch. Everyone. Sin makes God angry. You bet your bottom it does, but He never decides to not love us, give up on us, or turn His back on us because of our sin. He loves His children, all His children, even the children who don’t love Him back. I think sometimes as Christians we think Jesus only died for those who accept His sacrifice, but in reality, He died for all, or in His words, even the ones “who knew not” what they were doing.

The forgiveness of sin is for Jesus to give, not the church. He gives out the pardon, and we better be glad, because 9 out of 10 of us have sinned twenty times today and don’t even realize it. I’m thinking that when we see sin around us we shouldn’t be eager to point it out in pride, or turn our nose in disgust, but rather we should have a broken heart like the Father, offer love like He does, and pray that we all may become more aware of the sinful nature we each reside in every day.

John 8:7 (NIV) When they kept on questioning him, he straightened up and said to them, “Let any one of you who is without sin be the first to throw a stone at her.”

1 John 4:10 (NIV) This is love: not that we loved God, but that he loved us and sent his Son as an atoning sacrifice for our sins.

Read Next On FaithIt
Christian Journalist Under Criminal Investigation for Using Wrong Pronoun in Tweet, Accused of “Misgendering”