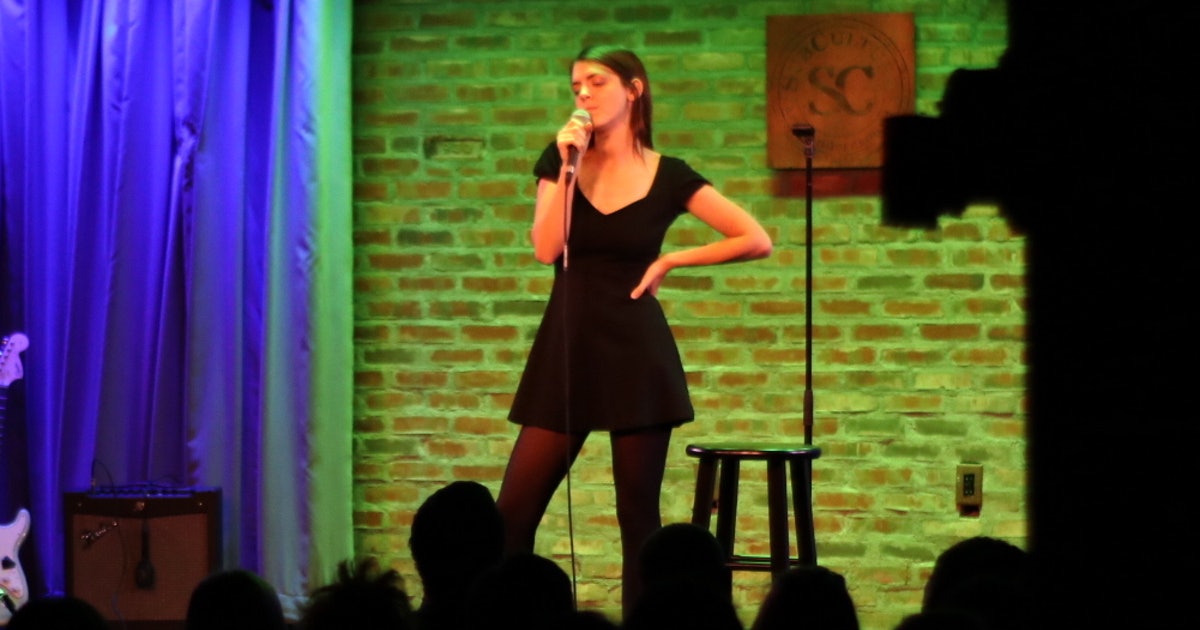 Amber Rollo never expected to come face-to-face with Harvey Weinstein. But on Oct. 23, at an Actor’s Hour event at Downtime Bar in NYC to support her friend Kelly Bachman’s comedy set, she noticed Weinstein sitting in the audience and knew she had to say something. Rollo says she walked up to Weinstein’s table, looked him straight in the eyes, and called him a “monster” — only to reportedly be cursed at by a man in Weinstein’s group and ignored by Weinstein himself. (A rep for Weinstein did not return Elite Daily’s request for comment on the sequence of events at the bar.) Rollo recounted this moment in front of an audience at the “Rape Jokes By Survivors” comedy show, put on by Upright Citizens Brigade (UCB) as part of New York Comedy Festival 2019 on Nov. 8 at SubCulture, using her interaction with Weinstein as the night’s rallying cry.

Rollo’s tweets about what happened with Weinstein at the Downtime Bar went viral and she’s experienced a whirlwind of media attention, as have Bachman and actor Zoe Stuckless, for calling out Weinstein publicly. “We confronted him, and now we’re famous,” Rollo tells me in an interview before the show, describing the influx of press inquiries and messages she‘s received after her thread about the Weinstein encounter went viral. “Rose McGowan slid into my DMs.”

McGowan also sat front row at the “Rape Jokes By Survivors” show, where Rollo, Bachman, and five more comedians identifying as sexual assault survivors used their stage time to tell their stories, laugh about the trauma they’ve endured, and describe how they’ve taken their power back in the aftermath of their experiences.

Intended to “explore the narrative of how we joke about rape,” according to a description on UCB’s website, Rollo and her fellow performers did not mince words on stage. Bachman described how she’s been labeled as “rape girl” for telling jokes about her sexual assaults. Rollo revealed she’s been assaulted multiple times while unconscious. As disturbing as these stories were, the show felt celebratory and healing. These comedians used their worst moments as material intended to make others laugh.

“Comedy is really cool in that it allows us to talk about things that are typically out of bounds in polite society,” Rollo says. “So, I think that it’s a really useful tool to use when speaking truth to power.” Knowing it can be triggering to hear people talk about their sexual assaults, Rollo used this event as an opportunity to help fellow survivors feel less alone. “It’s cognitive behavioral therapy in a way, to hear something that triggers you and then feel not othered but accepted and included,” she says. (Emily Dworkin, the co-author of a 2017 study on sexual assault and mental health published in the , recommends cognitive behavioral therapy as one of the best methods for healing after an assault.) Rollo notes low reporting rates for rape — according to the U.S. Bureau of Justice Statistics, only 24.9% of rape or sexual assault crimes in 2018 were reported to police — and the hesitance many people feel to talk about it as her motivation for speaking openly about this issue. “[Comedy] gives an opportunity for survivors to have a voice that they typically wouldn’t be able to have,” she says. “This is a way to get it out into the open, out into the public.”

Arti Gollapudi, a Brooklyn-based comedic performance artist, took the stage to read excerpts from her poetry book, “Boys I’ve Kissed and Hated.” She told the audience about leaving a previous abusive relationship, and joked about staying single to avoid falling back into another scary situation. Gollapudi is familiar with using trauma to make art — she’s hosted two recurring shows — “Boogie on the Brink” and “Yourself, Your Body” — that deal with topics related to grief and emotional pain.

But Gollapudi says she hasn’t always been so self-aware and open. The first time she was assaulted, at 18 years old, she didn’t acknowledge the experience to anyone. “I didn’t even realize what had happened to me until three years later,” she says. “When I was in my second semester of college, nobody knew how to talk about it. And when I came back for my fall semester, my assaulter was still going to parties with me.” She describes feeling shame about confronting her own trauma. “I was always like, ‘I’m very strong and opinionated, and I read all these books, and I know about all the feminist pedagogy,’” she says. “And to admit that I’m like that, but I’m someone who has been abused, was not necessarily an easy thing for me to come to.”

When she started writing comedy about her experiences, her mindset shifted. “The moment I decided to perform and talk about [it], that kind of ripped down my barriers around that shame,” Gollapudi says. “Like, you can’t laugh at me if I’m laughing at it first.” Sharing her trauma was a way to reclaim her story, and to acknowledge that other people can relate to what she’s gone through.

Also at “Rape Jokes By Survivors,” comedic musician Dylan Adler performed songs about going to therapy, direct-messaging his high school bully on Facebook, and dating as a queer-identifying person. He even briefly mentioned his own assault. “I’m able to laugh at things that to me in the moment seem sometimes very scary and painful,” Adler says. “Even with something I went through a day before, if I can write and make a joke about it, it’s like I’m looking at myself from an objective standpoint, and I’m able to take a little bit of the power out of some of the experiences.”

Adler hoped fellow survivors in the audience would leave the show feeling supported and seen. “I think the more people are open and honest about their experiences, the less shame people might have in sharing their truth,” he says. “Dealing with trauma is hard enough, but it’s even more difficult to deal with it by yourself.” And for those who maybe haven’t personally experienced sexual assault, hearing about others’ experiences creates empathy. “People can learn just how deeply a sexual assault actually affects a person, and how deeply a sexual trauma affects a person, and how important it is for a person to be actually believed and validated in their story,” Adler says. “Something huge for me and other people is for their story not to be belittled and for them to be believed.”

I was there, and “Rape Jokes By Survivors” was cathartic. It was jarring at first to hear the performers joke so audaciously about difficult topics, but the audience was receptive and affirming, cheering when a comedian riffed about overcoming trauma; sitting in somber silence when another described an assault in graphic detail.

As for Rollo, she’s processing her encounter with Weinstein the same way she processes so many of her life experiences — by writing them into comedy. (Her sets include commentary on losing her parents at a young age and other feminist issues.) “I have to fight the belief that am alone or that the world is against ,” she says. “And every time I say something about it on stage and the audience laughs with me and relates to me, I am fighting that idea. It can be very powerful. It can be very scary, as well, but it can be really really powerful when I put enough thought and work into it.”

Rollo’s headlining set at “Rape Jokes By Survivors” reinforced that unifying theme. She asked the audience to remember the Oct. 24 statement issued by a Weinstein representative, which referred to the Actor’s Hour incident as “uncalled for, downright rude and an example of how due process today is being squashed by the public.” Rollo — who has since changed her Twitter name to “Downright Rude” — proudly told the crowd, “You know what’s rude? Rape is rude!” (To date, more than 80 women have accused Weinstein of sexual abuse, CNN reports, and his trial on the charges of predatory sexual assault, a criminal sexual act, first-degree rape, and third-degree rape is set to begin Jan. 6, 2020, in Manhattan, following an appeal denial to move the trial to Albany County or Long Island‘s Suffolk County.) In return, the audience joined her with chants of “Rape is rude!” — a fittingly tongue-in-cheek and utterly sincere ending; a defiant assertion and a rousing call for change.