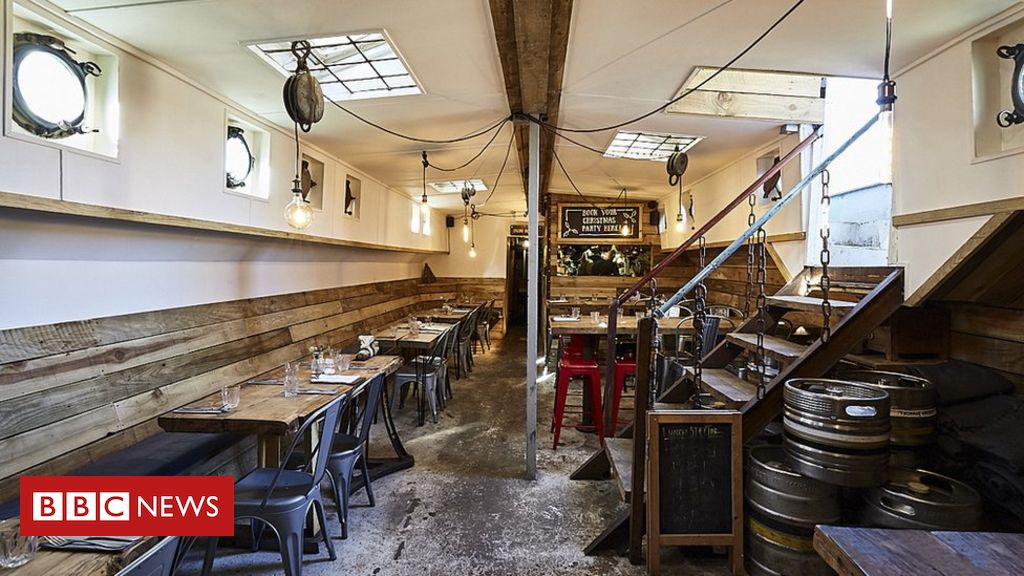 Pubs and restaurants around the UK are turning to crowdfunding websites to survive the lockdown.

Village locals and inner-city craft beer bars are among those asking for pledges of up to £30,000.

Nick Antona, chairman of the Campaign for Real Ale (Camra), said many venues have had to become takeaways or shops to pay the bills.

But some, faced with rent, rates and cellars of lost stock, are having to ask for help as a last resort.

The BBC found at least 15 active appeals on the website Crowdfunder.co.uk raising funds for pubs, restaurants and music venues to help them through the lockdown, though there are likely to be dozens more.

Some are using other sites such as GoFundMe, or are launching donation schemes locally.

‘We will get through this’

Barge East, a floating pub and restaurant in Hackney Wick, has carved out a reputation as one of London’s top-rated venues on Trip Advisor.

But co-owner ‘Tommo’ Thomson said it would only survive until June without some form of emergency funding.

He and his two business partners launched an appeal the day after pubs were closed on 23 March.

“It really has helped secure our future,” said Mr Thomson, 34. “It means that, providing this crisis doesn’t go on for the next year, we will survive as a business – we will get through this.”

Those pledging will effectively receive vouchers for use in the restaurant on a 19th Century Dutch barge.

But other “gifts” are available for those pledging more. For £500, the head chef will cook at a house for up to six people.

Crowdfunding during the pandemic

The word “covid” appeared more than any other in a sample of 1,000 titles of appeals hosted on the Crowdfunder website.

People have been turning to crowdfunding sites to help raise money for the NHS, most notably 99-year-old Captain Tom Moore, who raised tens of millions of pounds through Just Giving, but there are also lots of requests for funding to help “save” businesses and venues or help them “survive”.

Over £7m has been raised by projects during the COVID-19 lockdown – £3m of that by small businesses through the site’s Pay it Forward scheme. This encourages people to buy products or vouchers in advance and claim them when the business reopens.

Mr Antona said about 2,000 pubs across the country have moved to “effectively becoming off-licences or takeaway restaurants”.

Some, particularly those with an on-site micro-brewery, were even thriving during the pandemic by delivering produce.

“Unfortunately, others have had to resort to things like crowdfunding to keep money coming in and pay the bills,” said Mr Antona.

“If people are there to support their local pubs it’s a great initiative – and it really goes to show how much we love our pubs.”

The 15 pubs around the UK contained in the sample are asking for £296,000 worth of funding.

As of last week, their combined campaigns had amassed £97,672.

Cities around the country, including Bristol, Manchester and Newcastle, have launched voucher schemes to try to encourage people to buy meal and drink tokens for use when the lockdown lifts.

But some smaller communities around the UK face losing their only public building if their local pub does not survive.

‘This is our life, our home’

Bradley and Charlotte Marchant, who run the Abinger Hatch in Surrey, were on course to have their best trading year since taking over in 2018.

Their pub is the centre of village life in Abinger Common, which sits miles away from the nearest shop.

However, the lockdown has forced the couple to ask for a month’s worth of costs – £16,000 – through Crowdfunder.

“For my wife and I this is our life, this is our home,” said Mr Marchant, 30. “We live above the pub and we love being part of the community.

“We’ve gone from having a good income to having nothing coming through the door.”

As it stands the couple are still shy of the £16,000 they are hoping for and their premises is just too large to apply for the government’s £25,000 supporting loan.

Though they have started a food home delivery service using their suppliers, the venture is just covering costs.

Even with their 17 staff on furlough, the couple say they can only last until the end of May without support.

“We get new emails coming though every time there is a new donation and it has made us cry nearly every time,” said Mr Marchant.

“A name will pop up and we will say ‘I know that person’. The support has been amazing.”

The rules of the Crowdfunder site require a campaign to reach its project total or the funds are not paid.

‘It’s come at the worst time’

On the Northumberland coastline, James and Debra Bolam are hoping to raise £10,000 to see The Cottage Inn through the lockdown.

The pub in Dunstan village relies largely on passing holiday trade through the summer season.

“The lockdown has come at the worst possible time,” said Mrs Bolam, 55. “We were fully booked up on our rooms from mid-March through to June.

“The Easter period usually kicks off our finances for the year, but we have lost all of that.”

The Bolams also find themselves with a premises that is too large to apply for any discretionary help through the government while their insurance policy only covers outbreaks of a small range of infectious illnesses.

They are about £9,000 short of their total and are seeing their utility bills and rent stack up.

All of their cellar beer will have to be returned before they reopen as it will be out of date.

“We have to make this work as this is our home as well as our business. We will hang on as best as we can but we will have difficulty re-stocking before opening again.”