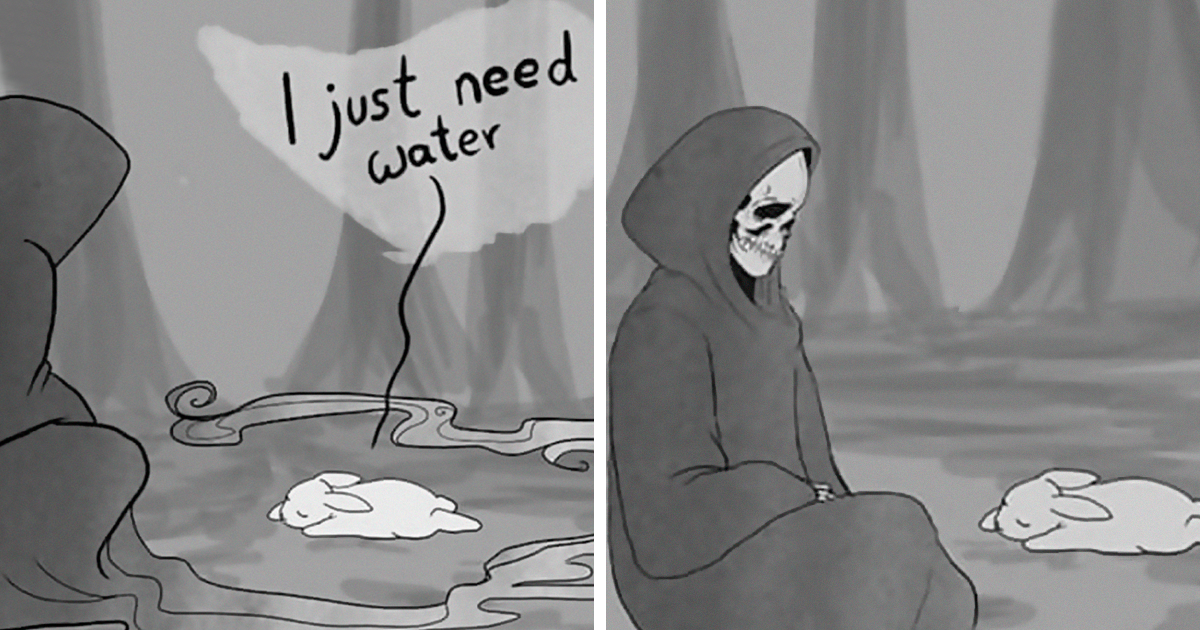 Easter is bad for bunnies. Widespread misunderstanding of domestic rabbits has made them one of the most abandoned pets in America, and Jenny Jinya is not OK with that. The same illustrator and comic artist who made people cry with her Good Boy and Black Cat strips just created a new one to make people stop and think before bringing a bunny into their homes.

The thing is that many people think they’re short-lived, low maintenance, cage-bound animals, so they must be good “starter pets,” akin to hamsters or goldfish. But the reality is quite different. Rabbits need a lot of exercise and can’t stay in a cage for long periods of time. They also need to learn to use a litterbox — which takes patience — and since they’re prey animals, they usually don’t like to be picked up by humans; they prefer to remain in control, with their feet on the ground.

Because so many of these cute little furballs end up at animal shelters in late spring or early summer, some pet sellers even stop offering them ahead of Easter and give would-be buyers a voucher for after the holiday in an effort to stem impulse purchases.

Once again, Jenny has portrayed the tragedy behind our careless choices, showing what it could mean for the poor animal. Seemingly fluffy and cute, as baby bunnies mature at between 3-6 months old, they can become aggressive and even destructive. Many new owners assume that these undesirable behaviors are signs of a deeper issue and get rid of the animal even though proper exercise, litterbox training, and spaying or neutering curbs the problem for most of them. Others may do a little research and balk at the time and money it takes to change bunny behavior. Jennifer McGee, co-manager of the Georgia chapter of House Rabbit Society, a shelter in the southeastern part of the state, told National Geographic she’s often met with shock and frustration from parents: “What do you mean I have to spend $200 to fix a $30 rabbit?” It’s unclear how many rabbits are abandoned in the U.S. exactly. There isn’t an organization that collects such data. Most shelters track how many dogs and cats they find, euthanize them or put them up for adoption but they typically put rabbits in with birds, reptiles, and small mammals in the “other” category.

According to Anne Martin, executive director of the House Rabbit Society, about two-thirds of rabbits rescued in Northern California are strays left to fend for themselves. In some cities, like Las Vegas and Spokane, public parks and empty lots have become dumping grounds for unfixed and unwanted rabbits. People abandon them, most probably unaware that this is a death sentence. Domestic rabbits lack the survival instincts of their wild cousins, Martin says, and are unable to fight infection, build safe shelters, or adapt to the weather.

People really appreciated the comic and the message behind it