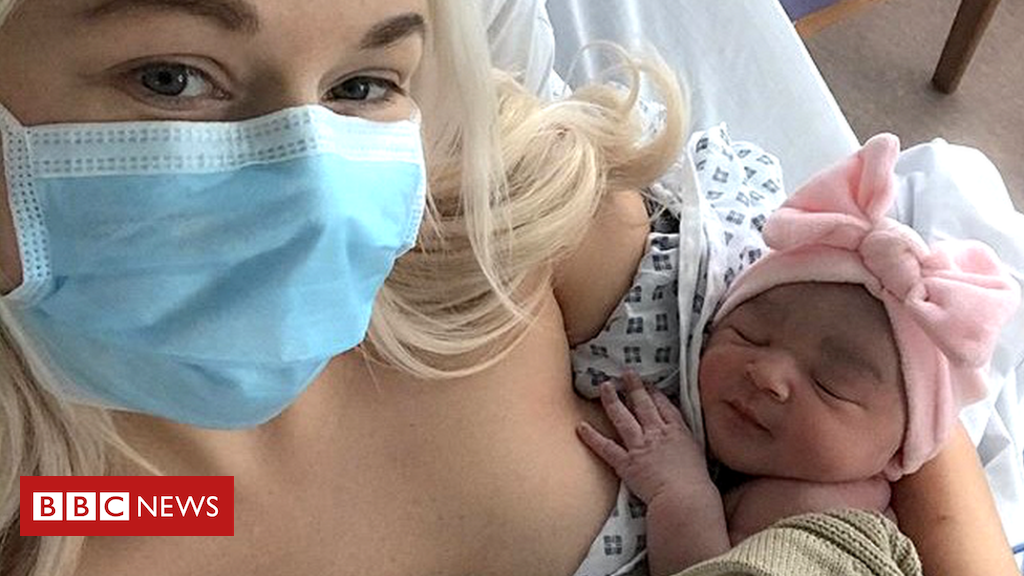 The coronavirus crisis is throwing many pregnant women’s birth plans up in the air and leading some health trusts to increase home births.

The image captured hearts on social media 10 days ago. Faolán, Gaelic for “little wolf”, was born in Drogheda in Ireland on Saturday 14 March and a few days later his grandfather dropped round to see him – through the window. He stayed for 10 minutes, gazing at his first grandchild.

Three generations of social distancing as my dad meets his grandson for the first time 😭😭😭 pic.twitter.com/uyHHgBBXxb

It was hard to have family so close and yet separated by a pane of glass when they wanted more than anything to hold Faolán, says his mother, Emma Dillon Gallagher, who went into labour before Ireland’s lockdown and emerged from hospital into a different world.

Like parents of newborns in the UK, Emma and her husband Mìcheál then self-isolated for 14 days, while visiting family members took turns at the window. A tweet of the photograph above, with the caption “three generations of social distancing”, has since collected nearly 730,000 likes.

But this is just one of many changes brought about by the arrival of the coronavirus.

For some pregnant women it has opened up the prospect of having to give birth alone, or of being unable to have the Caesarean section they were hoping for. For others it’s a case of not being able to have the baby in a midwife-led birth centre, but in a hospital instead – or even at home.

While some health trusts are clamping down on home births because of the virus, others are planning to deliver babies this way whenever it’s medically safe.

Nikki Dennett-Thorpe gave birth to baby Stanley a few days after Emma Dillon Gallagher, on 19 March – the day before all UK schools and nurseries were closed indefinitely. She needed a Caesarean section, so when she developed a persistent cough her hospital in Eastbourne suddenly had to make special arrangements.

She waited in an isolation room, ready in her hospital gown and compression socks as the staff tried to find an operating theatre which wouldn’t be needed immediately afterwards – allowing time for it to be decontaminated before the next patient.

Nikki worried that her son’s first sight of the world would be disturbing. “I thought, when Stanley comes out he is going to be faced with mummy and daddy with surgical masks on,” she says.

But in the end, the consultant decided it would be safe to postpone the Caesarean section for 24 hours, while Nikki was tested for coronavirus – and fortunately she got the all-clear.

Nikki and her husband then went into isolation for 14 days, with Stanley and their toddler. Like Faolán during his isolation, Stanley has yet to be introduced to the wider family.

Women who have chosen to have a Caesarean section when it isn’t a medical necessity – because they are anxious about natural birth, for example – are in some cases being told that it may have to be delayed, or even cancelled, says the charity Birthright.

One woman who called the group said she’d been told she would have to wait and see if there was capacity to have a C-Section on the day, and may have to have an induction instead.

The Royal College of Obstetricians and Gynaecologists (RCOG) says “pregnant women do not appear to be more likely to be seriously unwell than other healthy adults if they develop the new coronavirus”.

There is no evidence to suggest an increased risk of miscarriage if a pregnant woman becomes infected, according to the RCOG, and “given current evidence, it is considered unlikely that if you have the virus it would cause problems with the baby’s development”.

It adds: “In all reported cases of newborn babies developing coronavirus very soon after birth, the baby was well.

Health trusts currently have competing priorities. One is to limit transmission of the virus by keeping people out of hospital as much as possible. Another is to divert staff to help treat Covid-19 patients, and a third is to free up space for these patients to be treated.

It’s for the last reason that a number of midwife-led Birth Centres have closed and been turned into isolation wards. In some areas, women will now be giving birth in a hospital environment instead, but in others the plan is to switch to home births in all cases where this is medically possible.

At the same time, in parts of the country women have been told that the home births they were planning may no longer be possible because of a shortage of midwives – two are often required to be present throughout – or ambulances. An ambulance must always be available in case something goes wrong and the woman has to be taken to hospital.

First time mum-to-be Hanna Cesek-Shaw has her heart set on giving birth at home and has been told so far that this can go ahead.

“I have never been less keen to go to a hospital,” she says. “I like the idea of my baby being born into a pool in our living room into a nice calm environment, one that we have control over one where I can be in my own bed after and eat my own food.”

She lives near Wycombe Hospital in Buckinghamshire, where the Birth Centre has closed and women are being offered home births as a possible alternative. It may not be an option they all want to take up. For Hanna, by contrast, her primary fear is that something may happen at the last minute to derail her carefully laid home-birth plans.

She’s in touch with other women online who have been told there aren’t enough midwives or ambulances. But she says she’s not “anti-hospital” and has noticed a great wave of positivity on her social media feed about hospital births in the last few days. “They’ve all been sharing really positive things about labour wards, so they’re like, ‘Labour ward birth, not what you had planned, but look how good it can be.’ And that’s been really reassuring and good to see.”

If Hanna does have to give birth in hospital, she won’t be able to take her doula, and her husband, Rhodri, will be asked to leave two hours after the baby is delivered.

Some people are preparing to give birth without a loved-one present at all. Who will look after any existing children when the baby is being born? With lots of grandparents now in self-isolation they are out of the equation, as is anyone who could bring coronavirus into the new baby’s home.

One pregnant woman told me that when she goes into labour her husband will have no choice but to drop her off in the hospital car park and then drive home with their toddler. Her Ghanaian parents are no longer able to fly over to help out.

“I am trying to be brave about having to go through it all without my husband there to hold my hand or rub my back, but some days it all gets too much,” she says. “I am just going to try to focus on meeting my baby at the end.”

Rebecca Campbell, a nurse from Cheshire, gave birth alone on Tuesday morning because her husband, Richard, has a health condition that means he cannot safely enter a hospital during this epidemic.

He said he felt “devastated” to miss it.

Rebecca made plans to FaceTime Richard once she had their daughter in her arms.

The hospital was aiming to give her personal protective equipment and her own room to recover in but she was well aware that it might not be possible and was prepared in that case to spend a fortnight in self-isolation with her daughter, in a family member’s empty house.

The idea of being away from her husband and boys was distressing, but she steeled herself for it – because returning to her family and taking the coronavirus with her was too great a risk to take.

It hasn’t been possible to ask her, in the hours since the birth, whether she will have to isolate or not.

None of these women could have imagined nine months ago that they would be giving birth during a pandemic, but, as Rebecca puts it: “You are braver and stronger than you think.”

For young Stanley Dennett-Thorpe, meanwhile, the breaking news updates on the television are a blur. He often sleeps through the UK government’s daily 5pm briefing. The constant deluge of coronavirus information exists outside his orbit.

His world revolves around his mum, and for that she is thankful.