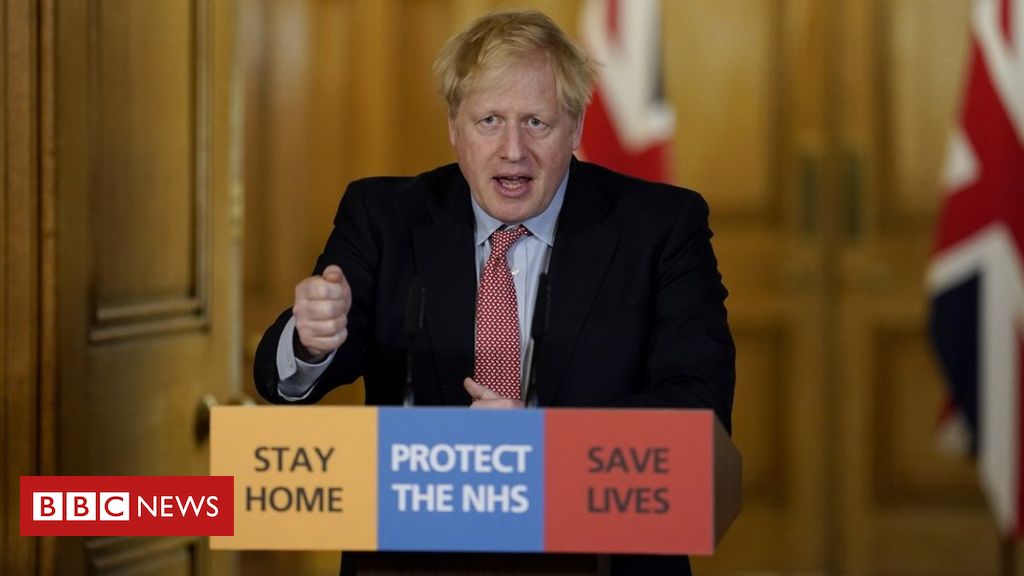 Some 20,000 former NHS staff have returned to work to help the fight against coronavirus, Boris Johnson has revealed in a video posted online.

The prime minister, who is self-isolating after testing positive for the virus, said the country would get through the crisis “together”.

It comes after England’s deputy chief medical officer said it could be six months before life returns to “normal”.

The number of people who have died with the virus in the UK has reached 1,228.

Among those to have died is Amged El-Hawrani, a 55-year-old doctor and ear, nose and throat consultant at Queen’s Hospital Burton.

And last week an organ transplant consultant died after testing positive for the virus.

Prof Andrew Goddard, the head of the Royal College of Physicians, said “about one in four” of its workforce was currently off work, either with symptoms or isolating because family members have symptoms.

“I’ve got lots of colleagues sitting at home with family members. They themselves don’t have symptoms and are chomping at the bit to try and get back to work,” he said, adding that widespread testing would mean staff who are well can return to work.

The UK government said it was ramping up testing of NHS frontline workers.

In the video, which Mr Johnson posted on Twitter, he contradicted the view of Conservative prime minister from 1979-1990, Margaret Thatcher, that “there is no such thing as society”.

Thanking the doctors, nurses and other former professionals who have returned to the NHS, as well as the 750,000 members of the public who have volunteered to help the country through the pandemic, he said: “We are going to do it, we are going to do it together.

“One thing I think the coronavirus crisis has already proved is that there really is such a thing as society.”

The prime minister has continued to lead the country’s response to the pandemic while self-isolating in his Downing Street flat.

Mr Johnson said the public appeared to be obeying the restrictions set out by government to slow the spread of the virus, adding that train use was down 95% and bus use down 75%.

Prof Neil Ferguson, from Imperial College London and author of a report into the pandemic, told BBC Radio 4’s Today programme there were “some early signs of slowing in some indicators” in the UK.

“If we look at the number of new hospital admissions per day for instance, that does appear to be slowing down a little bit now. It’s not yet plateaued, so the numbers can be increasing each day, but the rate of increase has slowed.”

Asked how many people may have been infected in the UK, Prof Ferguson said it varied across the country.

“(In) Central London it could be as many as 3% to 5% of the population has been infected, maybe more in individual hotspots. In the country as a whole, the UK, maybe 2% or 3%.”

On Sunday, England’s deputy chief medical officer said the government would review the lockdown measures for the first time in three weeks’ time.

But Dr Jenny Harries warned the public: “We must not then suddenly revert to our normal way of living.”

She said that would be “quite dangerous” and could risk a “second peak” of the virus.

Dr Harries said this did not mean the country would be in “complete lockdown” for half a year.

Instead, she said social distancing measures would be reviewed every three weeks and reduced gradually over a period of around three to six months.

However, Dr Harries said it was “plausible” restrictions could continue for longer.

Speaking alongside Dr Harries at Sunday’s news conference, Housing Secretary Robert Jenrick said the UK was on an “emergency footing” in a way “unprecedented” in peacetime.

Following concerns over shortages of personal protective equipment for frontline NHS staff, Mr Jenrick said there was now a “national supply distribution response team” to deliver PPE to those in need, supported by the Armed Forces and other emergency services.

And he said the first 50,000 food parcels would be sent out this week to the most vulnerable people in at-risk groups, who are being told to stay at home for 12 weeks to protect them from the virus.