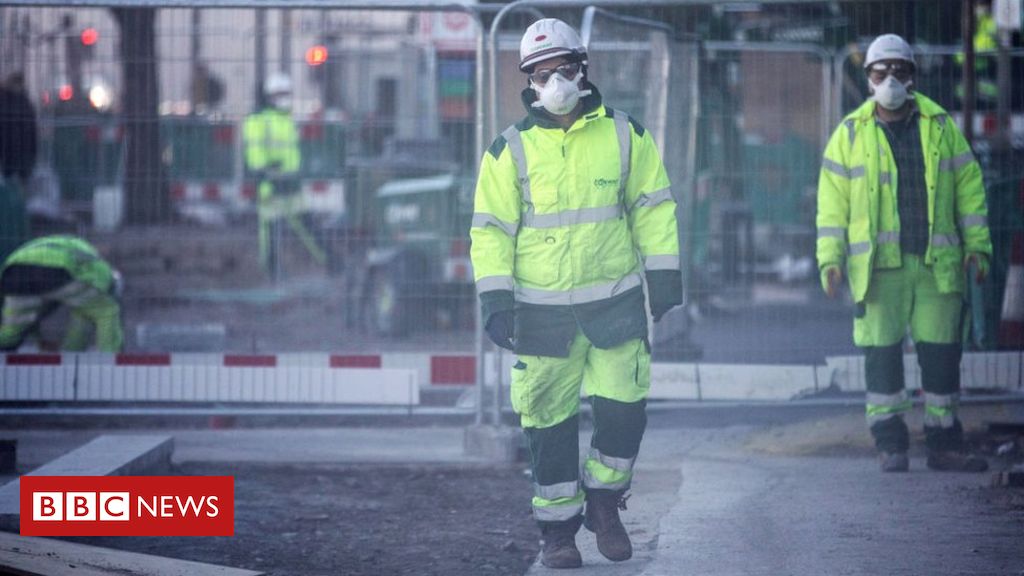 A growing number of construction companies have said they will stop all non-essential work to help fight the coronavirus, but others continue to operate amid confusion over the government’s advice.

Housebuilder Persimmon has joined others in pledging to down tools, while most work has stopped on HS2 rail.

But FTSE 250 listed Redrow is among those keeping sites open.

There is concern the virus will spread easily on busy construction sites.

The government has said work can continue so long as people are 2m (6.5ft) apart, but critics say this is impossible to enforce, and that public health should come first.

Taylor Wimpey, which builds over 10,000 homes a year, said this week that it was closing all of its sites “because we believe it is the right thing to do”.

Barratt, meanwhile, said it would close 400 sites and offices to prioritise “the health and safety of customers and employees”.

Persimmon said it would stop all but essential work, while the majority of HS2 sites had “paused or are pausing construction works,” a spokesperson for the project said.

But Cairn Construction, which built 2,200 homes last year, was among those to say it would keep its sites open.

“Aligned to government guidelines, construction activity continues across each of our active sites under extensive health and safety protocols,” the firm said.

On Tuesday, Health Secretary Matt Hancock said any worker who could not do their job from home should go to work to “keep the country running”.

But Michael Gove, the Cabinet Office minister, told ITV only construction workers doing jobs “critical to the economy” should go in.

He added that builders should not be going into people’s homes.

The National Federation of Builders, which represents small-to-medium sized contractors, said builders could work on sites if they followed safety guidelines, but the Federation of Master Builders said they should only go in if it is for emergency work.

“While we accept the government’s advice to keep sites open, we have concerns about how this would be applied in practice,” FMB boss Brian Berry said.

Former Tory cabinet minister Iain Duncan Smith joined those calling for a pause to all non-essential work in the UK, telling BBC Two’s Newsnight: “I think the balance is where we should delete some of those construction workers from going to work and focus only on the emergency requirements.”

Andy Burnham, Labour Mayor of Greater Manchester, told the programme the decision to allow non-essential work appeared to have been made for “economic reasons”.

“When you’re in the middle of a global pandemic, health reasons alone really should be guiding all decision-making,” he said.

Some construction workers told the BBC they feel “angry and unprotected” going to work, while others are under pressure from employers to go in.

Many are self-employed and fear that they could lose income if their employers shut down.

Chancellor Rishi Sunak has promised help for the self-employed and will announce a package of support on Thursday at the government’s daily press conference, a government source told the BBC.

Taylor Wimpey said it was looking at how to support its around 2,000 directly employed staff, but had no plans for the “sizable number” of self employed freelancers on its sites.

“They are generally not actually operating for us, they are operating for a sub-contractor, so we are trying to support our subcontractors [by paying them on time or in advance],” boss Pete Redfern told the BBC’s World at One.

He admitted self-employed workers were the “single biggest gap” and that it was “critical” government support came through quickly.

Different countries and regions have taken different approaches to the issue. Italy, which is under a strict lockdown, says employees including builders can continue to go to work if their jobs cannot be done at home.

But Boston in the US announced construction activity should be suspended on Monday.

And Scotland First Minister Nicola Sturgeon said building sites “should close for the period of the efforts to combat this virus”.