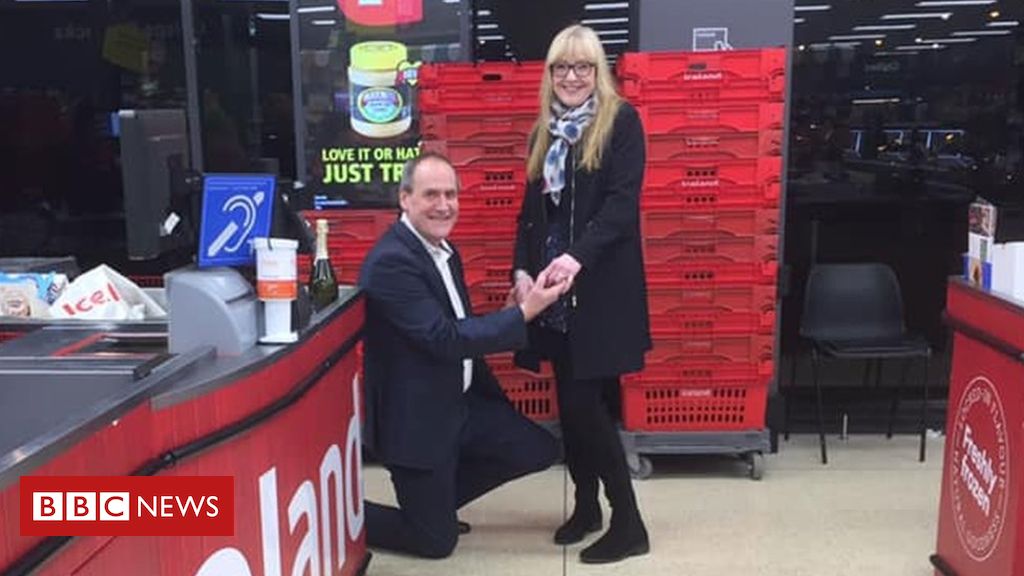 A nurse proposed to his girlfriend in a branch of Iceland after a romantic trip to the country of the same name was cancelled due to the coronavirus.

Robert Ormsby popped the question in an empty aisle after their holiday to Reykjavik was called off on Monday.

Patsy Murdoch said “yes”, but admitted she was “laughing hysterically” as he got on one knee in the Tonbridge store.

A photo of the proposal has gone viral and the couple said they were happy to spread some joy at this tough time.

“It’s nice to know you can cheer somebody up by doing something that was just a humorous thing to make up for what we were going to miss,” said Mr Ormsby, a charge nurse at Maidstone and Tunbridge Wells NHS Trust.

The couple, both 58, was on their way to dinner when he nipped into Iceland under the pretence of picking something up.

“I was actually looking for an empty aisle,” he said.

As he dropped on one knee, his partner “looked embarrassed at first,” but quickly said “yes” and he “popped the ring on her finger,” he said.

The couple, from Sevenoaks, Kent, had bought the ring together and Ms Murdoch said she had been a “bit suspicious when his suit went on” earlier in the evening, but expected the proposal would be made at the restaurant.

“I was thinking ‘what do you want in Iceland?’ I didn’t twig for a minute and then suddenly he went down on one knee….I was just laughing hysterically.”

Ms Murdoch, who works for Hospice in the Weald, added: “It was very exciting.”

She said the online response had “gone berserk” and had been a welcome distraction from the impact of the pandemic.

“We all need a bit of distraction at the moment,” she added.

The couple posed for a photograph near the checkout as they left and gave permission for the company to post the images on social media.

“It’s kind of gone a bit crazy since then,” said the groom-to-be, who coincidentally worked for the frozen food firm in the 1980s.

Mr Ormsby, who now works in operating theatres, said he would like to use the attention to praise the hard work of colleagues preparing for the worst of the outbreak.

Anaesthetists are the “frontline people for this”, he said, adding that it was “frightening and reassuring at the same time” to see the lengths they have gone to, to get ready for when the crisis hits.