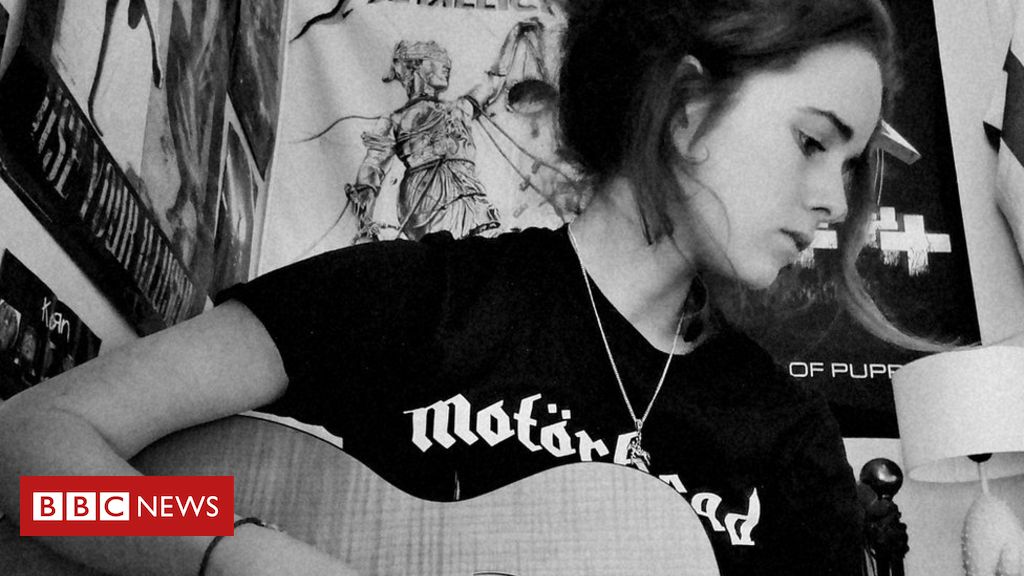 I was 11 when things started to get difficult.

It began with the move from a mixed primary school to an all girls’ school.

It’s a familiar story: I was bullied a lot, had problems with low self-esteem; had issues about the way I looked, who I was and what I wanted.

I was not like the other “girly girls” at the school, and children can be really, really cruel.

Growing into a teenager, things did not let up.

Along with everything that goes along with puberty, I found myself pulling away from an interest in science – something which seemed to come as a birthright for everyone in my family.

On top of that, making friends didn’t get any easier.

‘Rock was my rock’

Then I found rock music. From then on, rock was my rock.

It was a safety blanket – a soundtrack to a time when I felt alone and isolated.

My first contact came from films, and what I could make out coming through my brother’s door.

I soon moved on, via Skillet, Breaking Benjamin and Thousand Foot Krutch to pop-punk bands like blink-182 and Green Day, later venturing into grunge like Nirvana and hard rock like Guns n’ Roses.

Whenever I needed it – which was plenty of times – it was what I turned to.

Putting my headphones on was a way to switch off the thoughts of self-loathing, the anxiety around my appearance and the echoes of unkind words spoken by classmates.

A few short years later, another big change sparked a change in my music taste.

In 2018, after finishing my GCSEs, I moved to Downpatrick from Cambridge in England and the culture shock left me stunned.

That was until my first group guitar lesson, which my mum had signed me up for in the hope of offering me a gateway to new friends.

There was a boy there with a gorgeous white ESP LTD Snakebyte guitar playing these heavy riffs that I had never heard.

That was when metal came into my life at full volume.

I listened to Master of Puppets by Metallica as soon as I got home, and I was mesmerised.

Within no time, I had an in-depth knowledge of all of their albums and moved onto other bands like Megadeth, Iron Maiden and Slayer.

It is more intense than rock music – and it came at a point in my life when I felt a lot of intense things.

‘Not as much misogyny in metal’

From the first two months I spent in Northern Ireland when I felt isolated and alone, I now felt like I was part of something.

I had found my new identity, spending weekends at local gigs, discovering new bands, and, most importantly, making a lot of wonderful new friends, all of us united through a love of metal.

There is still an element of sexism in heavy metal, as it involves a lot more men than women.

Some people might want to call you a poser and say you are putting on an act to get male attention.

But that has only happened a handful of times and, mostly, people are interested in why I like it.

Something I like about metal is that, despite what you might think, I have not come across a lot of misogynistic lyrics.

Compared to other genres of music, there is not an over-sexualisation of women.

In the scene, you are starting to see a lot more female-fronted groups, so things are changing.

I really look up to all the members of Metallica, but especially Lars, the drummer.

It was after seeing Metallica play at Slane that I took up the drums. A lot of that was down to Lars.

Another person I look to is Dave Mustaine from Megadeth.

He had huge addiction issues to overcome, having to deal with drugs and alcohol, and he never let that hold him back.

To the onlooker, it may seems like a mass of screeching guitars, gruff vocals and aggressive lyrics.

But look past that and you’ll see one of the most open, supportive communities out there, full of passionate and talented musicians and incredibly dedicated fans – all united by their love of possibly the most misunderstood genre of music out there.

So, to metal – thank you for rescuing me and giving all the “misfits” a place to call home.