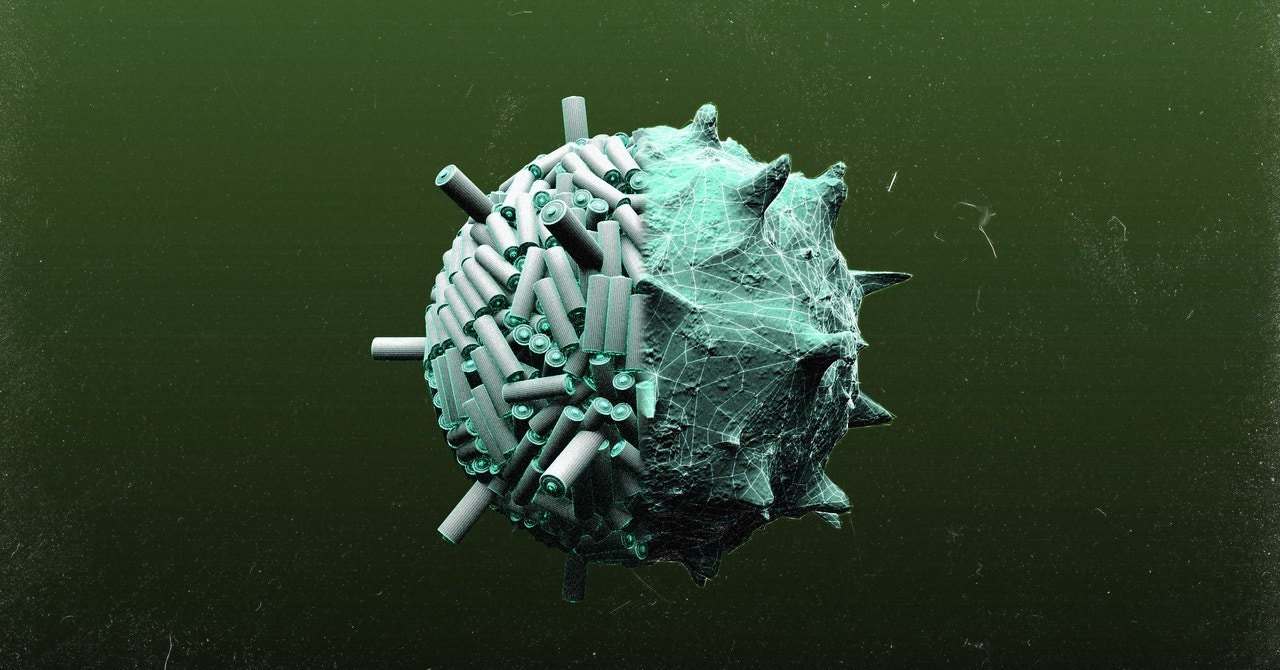 In 2009, MIT bioengineering professor Angela Belcher traveled to the White House to demo a small battery for President Barack Obama, who was just two months into his first term in office. There aren’t many batteries that can get an audience with the leader of the free world, but this wasn’t your everyday power pouch. Belcher had used viruses to assemble a lithium-ion battery’s positive and negative electrodes, an engineering breakthrough that promised to reduce the toxicity of the battery manufacturing process and boost their performance. Obama was preparing to announce $2 billion in funding for advanced battery technology and Belcher’s coin cell pointed to what the future might hold in store.

A decade after Belcher demoed her battery at the White House, her viral assembly process has rapidly advanced. She’s made viruses that can work with over 150 different materials and demonstrated that her technique can be used to manufacture other materials like solar cells. Belcher’s dream of zipping around in a “virus-powered car” still hasn’t come true, but after years of work she and her colleagues at MIT are on the cusp of taking the technology out of the lab and into the real world.

As nature’s microscopic zombies, viruses straddle the divide between the living and the dead. They are packed full of DNA, a hallmark of all living things, but they can’t reproduce without a host, which disqualifies them from some definitions of life. Yet as Belcher demonstrated, these qualities could be adopted for nanoengineering to produce batteries that have improved energy density, lifetime, and charging rates that can be produced in an eco-friendly way.

“There has been growing interest in the battery field to explore materials in nanostructure form for battery electrodes,” says Konstantinos Gerasopoulos, a senior research scientist who works on advanced batteries at Johns Hopkins Applied Physics Laboratory. “There are several ways that nanomaterials can be made with conventional chemistry techniques. The benefit of using biological materials, such as viruses, is that they already exist in this ‘nano’ form, so they are essentially a natural template or scaffold for the synthesis of battery materials.”

Nature has found plenty of ways to build useful structures out of inorganic materials without the help of viruses. Belcher’s favorite example is the abalone shell, which is highly structured at the nanoscale, lightweight, and sturdy. Over the process of tens of millions of years, the abalone evolved so that its DNA produces proteins that extract calcium molecules from the mineral-rich aquatic environment and deposit it in ordered layers on its body. The abalone never got around to building batteries, but Belcher realized this same fundamental process could be implemented in viruses to build useful materials for humans.

Belcher’s virus of choice is the M13 bacteriophage, a cigar-shaped virus that replicates in bacteria. Although it's not the only virus that can be used for nanoengineering, Belcher says it works well because its genetic material is easy to manipulate. To conscript the virus for electrode production, Belcher exposes it to the material she wants it to manipulate. Natural or engineered mutations in the DNA of some of the viruses will cause them to latch on to the material. Belcher then extracts these viruses and uses them to infect a bacterium, which results in millions of identical copies of the virus. This process is repeated over and over, and with each iteration the virus becomes a more finely-tuned battery architect.

Belcher’s genetically engineered viruses can’t tell a battery anode from a cathode, but they don’t need to. Their DNA is only programmed to do a simple task, but, when millions of viruses perform the same task together, they produce a usable material. For example, the genetically-modified virus might be engineered to express a protein on its surface that attracts cobalt oxide particles to cover its body. Additional proteins on the surface of the virus attract more and more cobalt oxide particles. This essentially forms a cobalt oxide nanowire made of linked viruses that can be used in a battery electrode.

Belcher’s process matches DNA sequences with elements on the periodic table to create a sped-up form of unnatural selection. Coding the DNA one way might cause a virus to latch on to iron phosphate, but, if the code is tweaked, the virus might prefer cobalt oxide. The technique could be extended to any element on the periodic table, it’s just a matter of finding the DNA sequence that matches it. In this sense, what Belcher is doing is not so far from the selective breeding done by dog fanciers to create pooches with desirable aesthetic qualities that would be unlikely to ever show up in nature. But instead of breeding poodles, Belcher is breeding battery-building viruses.

Belcher has used her viral assembly technique to build electrodes and implement them in a range of different battery types. The cell she demoed for Obama was a standard lithium-ion coin cell like you might find in a watch and was used to power a small LED. But for the most part, Belcher has used electrodes with more exotic chemistries like lithium-air and sodium-ion batteries. The reason, she says, is that she didn’t see much sense in trying to compete with the well-established lithium-ion producers. “We aren’t trying to compete with current technology,” Belcher says. “We look at the question, ‘Can biology be used to solve some problems that haven’t been solved so far?’”

One promising application is to use the viruses to create highly ordered electrode structures to shorten the path of an ion as it moves through the electrode. This would increase the battery’s charge and discharge rate, which is “one of the ‘holy grails’ of energy storage,” says Paul Braun, director of the Materials Research Laboratory at the University of Illinois. In principle, he says, viral assembly can be used to significantly improve the structure of battery electrodes and boost their charging rates.

So far Belcher’s virally-assembled electrodes have had an essentially random structure, but she and her colleagues are working on coaxing the viruses into more ordered arrangements. Nevertheless, her virus-powered batteries performed as well or better than those with electrodes made with traditional manufacturing techniques, including improved energy capacity, cycle life, and charging rates. But Belcher says the biggest benefit of viral assembly is that it is eco-friendly. Traditional electrode manufacturing techniques require working with toxic chemicals and high temperatures. All Belcher needs are the electrode materials, room temperature water, and some genetically-engineered viruses.

“Something my lab is completely focused on now is trying to get the cleanest technology,” Belcher says. This includes taking into consideration things like where the mined material for electrodes is sourced, and the waste products produced by manufacturing the electrodes.

Belcher hasn’t brought the technology to market yet, but says she and her colleagues have several papers under review that show how the technology can be commercialized for energy and other applications. (She declined to get into the specifics.)

When Belcher first suggested that these DNA-driven assembly lines might be harnessed to build useful things for humans, she encountered a lot of skepticism from her colleagues. “People told me I was crazy,” she says. The idea no longer seems so far-fetched, but taking the process out of the lab and into the real world has proven challenging. “Traditional battery manufacturing uses inexpensive materials and processes, but engineering viruses for performance and solving scalability issues will require years of research and associated costs,” says Bogdan Dragnea, a professor of chemistry at the Indiana University Bloomington. “We have only recently started to understand the potential virus-based materials hold from a physical properties perspective.”

Belcher has already co-founded two companies based on her work with viral assembly. Cambrios Technologies, founded in 2004, uses a manufacturing process inspired by viruses to build the electronics for touch screens. Her second company, Siluria Technologies, uses viruses in a process that converts carbon dioxide to ethylene, a gas widely used in manufacturing. At one point, Belcher was also using viruses to assemble solar cells, but the technology wasn’t efficient enough to compete with new perovskite solar cells.

Whether the viral assembly of battery electrodes can scale to the levels needed for commercial production remains an open question. “In a battery production facility they use tons of material, so getting to that level with biological molecules is not very easy,” says Gerasopoulos. He says he doesn’t believe this obstacle is insurmountable, but is “probably among the key challenges up to this point.”

Even if the world never sees a virus-powered Tesla, Belcher’s approach to biologically-driven nanoengineering holds immense promise in areas that have little to do with electricity. At MIT, Belcher is working with a team of scientists that leverage viral assembly techniques to create tumor-hunting nanoparticles. Designed to track down cancerous cells that are far too small to be detected by doctors, these nanoparticles could drastically improve early detection and lower mortality rates in cancer patients. In principle, the particles could also be armed with biomaterial that would kill the cancer cells, although this remains a distant goal.

For all of human history, viruses have been the harbingers of death and disease. But Belcher’s work points to a future where these little parcels of DNA may have a lot more to offer.