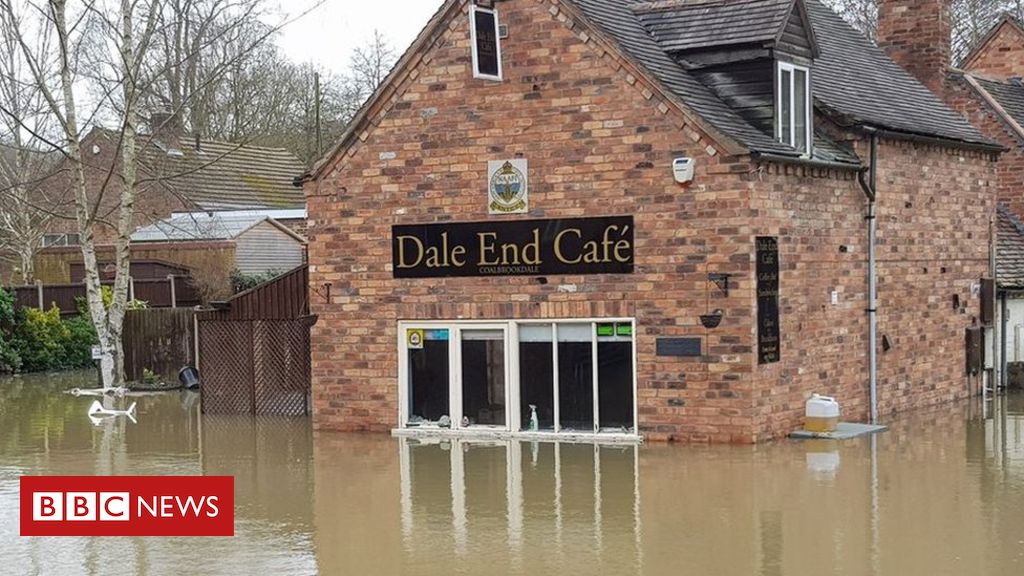 “We sat in a hairdressers across the road, which is slightly higher up, and we watched our business go under.”

Chris Harrison runs the Dale End Cafe in Coalbrookdale, a village in the Ironbridge Gorge in Shropshire. Last weekend was particularly hard, as he should have been celebrating the second anniversary of his business.

But local firms have been left counting costs amid rising river levels caused by Storm Dennis.

Chris told the BBC’s Wake Up to Money programme that it was like watching a “sinking ship”, but that the local community rallied around him.

Volunteers arrived at 6am on Sunday to help sweep out the mud, with one 70-year-old customer offering his van to help.

“Everybody was mucking in, cleaning up the shop and making sure everyone was safe. But it was all undone 24 hours later,” Chris says.

The cafe was flooded twice in less than two days. First, when a nearby brook burst, and again when the River Severn peaked on Tuesday.

He says that thousands of pounds worth of damage has been caused, and that everything that was in the cafe will need to be replaced.

“You’re watching the food you’ve bought floating around your cafe,” he says.

It’s a familiar story to business owner Mark Davies. He runs Darwin’s Townhouse bed and breakfast in Shrewsbury – on the banks of the River Severn.

“I was away for a business meeting when the river started rising, and I got back to complete devastation,” he says.

Mark says that the damage has taken two rooms out of action in the basement of the “main house”, an 18th Century property.

“All our dry goods like coffee and tea, cleaning equipment, and even my maintenance tools are all underwater.”

Eight rooms that sit at the back of the property were completely cut off from the main house as the river peaked.

As flood warnings remain in place across the country, local businesses are looking ahead to the weekend nervously.

Insurance analysts at PwC have estimated that damage caused by Storm Dennis and Storm Ciara in February could cost up to £425m.

But some business owners say there has been little support.

Mark says that his business was covered for flood insurance up until 5 February.

When it expired, he says he was visited by an insurance broker who told him no commercial insurer would cover the property. His premium is now about £3,500 a year – and doesn’t include flood cover.

He says: “It’s devastating for businesses when you’re taking such a massive hit without insurance. If you lose a lot of stock, it comes straight off your bottom line and that can kill business.”

Chris Harrison says that because his cafe has flooded on so many occasions, only one company would offer insurance cover. It was so expensive that the small business could not afford it.

Despite the risk, Chris says that he’s not willing to move the cafe.

“We’re a community cafe, and we’ve seen so much support from everybody. We’ll be back.”

Have you been affected by Storm Dennis? Get in touch by emailing haveyoursay@bbc.co.uk.

Please include a contact number if you are willing to speak to a BBC journalist. You can also contact us in the following ways:

Or use the form below