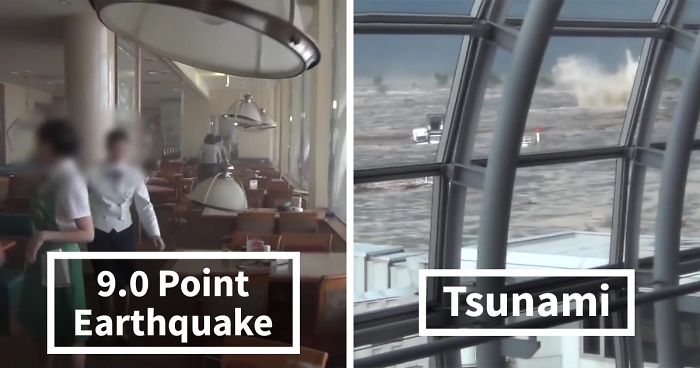 Nobody is ever truly ready for the destructive force of a natural disaster. While people can be evacuated along with some of their belongings, not everything can be saved.

What makes it even worse is that while disasters like storms and hurricanes can be predicted and prepared for, earthquakes, on the other hand, are impossible to predict.

However, that doesn’t stop people from trying their best to prepare for the unknown. And every bit helps. For the past several days, Japan has been experiencing light earthquakes, which range from 3.2 to 4.8 points on the Richter magnitude scale. This, in response, prompted news agencies around Japan to begin disaster prevention broadcasts just in case it gets worse.

One such television news broadcaster, the All-Nippon News Network, released harrowing footage of the 2011 Great East Japan Earthquake and Tsunami at Sendai Airport, Japan as a part of their disaster prevention program. It was filmed and sent to the television station by viewers back in 2011.

The 2011 Great East Japan Earthquake and Tsunami, or the 2011 earthquake off the Pacific coast of Tōhoku, as it’s officially called, was an undersea earthquake clocking in at 9.0–9.1 on the Richter scale. It was followed by massive tsunami waves, which were estimated to reach up to 40.5 meters in height, traveling at a speed of 700 kilometers per hour and reaching 10 kilometers inland. It was reported that the disaster led to over 15,000 fatalities with over 6,000 injured. People had no more than 10 minutes of warning before the fact to evacuate.

In context, it is considered the most powerful earthquake in the history of Japan, as well as the second most powerful and the sixth deadliest in the world in the last 20 years.

Bored Panda reached out to Angelina Kovalyova, a research student currently based in Tokyo, Japan, to comment on every-day life in an earthquake area.

Earthquakes of this magnitude are uncommon and each of them is experienced differently depending on the location: “I, living in Tokyo, experience earthquakes every 2-3 weeks—sometimes it’s a single shake and other times it’s a few shakes at a time throughout the day,” elaborated Angelina. “However, a friend of mine, who lives in Hokkaido, the northern part of Japan, experiences earthquakes once in a few months, if not a few times a year.”

According to Angelina, Japan takes all precautionary measures to ensure residents are in the know: “Oftentimes, a warning message is sent to mobile phones a few seconds before the earthquake hits,” explained Angelina. “I personally use an app that, in addition to the notification, provides extra information about the intensity and the spread of the earthquake.” Viewer-filmed footage exemplifies the horrific scope of the earthquake, followed by a powerful tsunami The footage provided in this article shows the massive earthquake hitting Sendai Airport. Although the structures are built to withstand the power of the disaster, all of the things inside could be seen violently shaking and falling to the ground. People were seen huddled up to whatever fixed objects they could find in their vicinity.

Once the violent earthquake subsided, airport staff began coming over to help travelers. Light fixtures continued to flail around as everyone was standing up. Everyone was soon evacuated outside, but only for a brief moment as it was reported that a massive tsunami was headed their way.

The video also includes footage of the tsunami coming in from west of Japan. The wave brought in a lot of debris, seemingly of houses and other structures that were swept away closer to the coast. The sheer force of the tide pushed away the airport’s heavy machinery like it was nothing.

Angelina Kovalyova shared what people ought to do during a serious earthquake in Japan: “During large earthquakes, people are advised to seek cover that doesn’t pose the danger of crumbling above you and falling—for example, under a table or in the doorway. If it’s possible, people are advised to immediately leave the building to avoid getting buried under the rubble.”

She continued: “It is also advised to have an emergency bag prepared. The bag should contain things like water, canned food, a flashlight, some matches, items for personal care—anything you would need as earthquakes can cause a water and power outage, possibly even for a few days. Lastly, it’s important to know what locations in your city are designated community shelters. Around here, usually, it is a gym at the local school property.” The earthquake lasted for around 3 minutes, as seen on the video provided below

Angelina has only experienced 2 bigger earthquakes during her life in Japan: “The strongest earthquakes I ever experienced here were in Kumamoto in 2016 (7.0) and in Fukushima in 2017 (6.9). The Kumamoto earthquake was relatively far from where I lived at the moment, so I only felt the aftershocks with a magnitude of 2–3 points, which felt like a regular daily earthquake here, even though the damage to the Kumamoto area was devastating.”

The research student continued: “The Fukushima earthquake, however, happened closer to where I lived, so I definitely felt stronger shaking. I remember hearing a warning notification on my phone at around 6AM in the morning. I knew that if I received a notification, it was a mild-to-strong earthquake so I should be cautious. However, 6AM is very early for me, so, being half-awake, I simply crawled under the table, waited out the shaking, and crawled back to bed. When I woke up later, I checked the news and learned that the earthquake was quite serious. I felt relieved that I wasn’t in the epicenter.”

Japan is one of the focal points of powerful earthquakes. It is estimated that around 20 percent of all global earthquakes exceeding 6 points occur in Japan. This occurs because the island country is situated in the Pacific Ring of Fire—a major area where many earthquakes and volcanic eruptions happen. Approximately 1,500 earthquakes strike Japan annually, the majority of which are, fortunately, minor tremors.