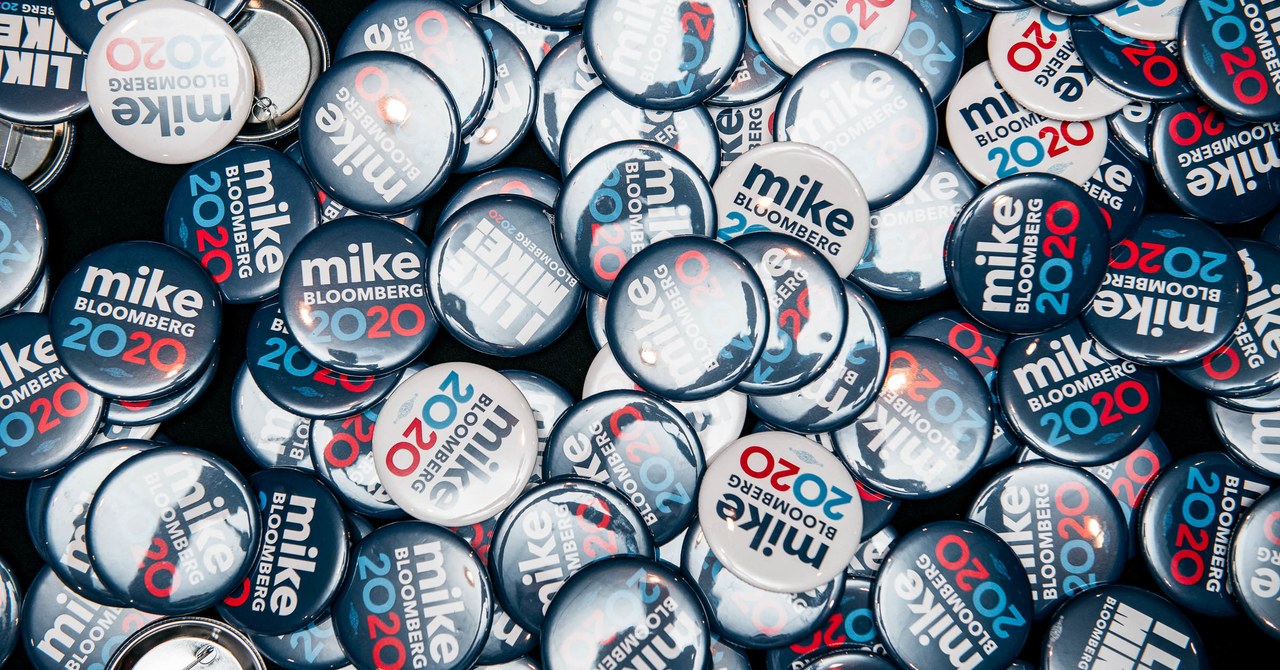 “Hello Mr. Salad,” the Instagram message from presidential candidate Michael Bloomberg begins. “Can you post this meme to make me seem cool for the upcoming Democratic primary?” A screenshot of this message was posted on Instagram this week by KaleSalad, a meme account with 3.5 million followers—and, as of now, an official allegiance with the wealthiest Democratic contender for commander in chief. (“Yes, this is really #sponsored by @mikebloomberg,” its caption reads.) It wasn’t the only message of its kind; dozens of other high-profile meme accounts posted similar images.

Related Stories
While You Were Offline
Has Mike Bloomberg Ever Even Met a Dog?

Royals
Putting a Price on Harry and Meghan’s #Influence

The escalation will undoubtedly continue. Last week, the Daily Beast reported that former New York City mayor and current billionaire Michael Bloomberg’s presidential campaign had paid social media influencers “to make him seem cool.” Embarrassing! But the candidate’s campaign didn’t stop its quest for online engagement there. In addition to @KaleSalad, similar sponsored posts popped up from accounts like @TankSinatra (2.3 million followers), @WhitePeopleHumor (4.3 million), and @FuckJerry (14.9 million followers). If you haven’t seen one of these posts yet, keep scrolling. Bloomberg’s campaign is not the first to seek credibility from online influencers, nor will it be the last, nor is his the most cringe-inducing bid for social media relevance. (That award goes to the Mayor Pete dance—everything else comes in a distant second.) Startups and strategists across the country are angling to be part of this new wave of political advertising. The 2020 election will, unfortunately, most certainly feature even more social media ads from fitness bloggers, Instagram-famous dogs, YouTubers, and even more of their varied, viral ilk. The 2016 presidential election was a demonstration of how candidates and their supporters could harness social media to spread information (and misinformation). This year, they’re enlisting influencers and meme-makers more directly in the effort.

“It’s one of those campaign tactics that is so inevitable that it must come true,” says Curtis Hougland. His firm, Main Street One, is working on influencer partnerships for a dozen different political campaigns, although he won’t divulge which. His firm isn’t alone. As The New York Times reports, this latest Bloomberg meme onslaught is the brainchild of a new company called Meme2020, led by Mick Purzycki, who has plenty of experience making low-quality posts incredibly popular as the leader of Jerry Media, the marketing company behind @FuckJerry.

Bloomberg isn’t the first 2020 Democratic hopeful to dip into the world of #spon. Before he dropped out of the race, a Super PAC backing Senator Cory Booker created a campaign to rouse influencer support for the former Newark mayor, although the influencer database mediating that effort, AspireIQ, ended up removing the campaign after BuzzFeed reported on it. (AspireIQ did not respond to request for clarification from WIRED as to why it removed the campaign.) And the Super PAC founded by Bloomberg’s fellow billionaire candidate Tom Steyer, NextGen, is also working on a variety of influencer-outreach efforts, although it focuses on policy rather than specific candidates (and it does not endorse or advocate for Steyer). “We’re picking up influencers in all 11 of the battleground states we’re working in this year,” NextGen national press secretary Heather Greven says. “We’re approaching people saying, ‘Hey, you have the most famous dog in Madison, Wisconsin. Are you willing to talk about the upcoming voter registration deadline?’”

Before it conscripted Meme2020, Bloomberg first went through a branded content agency called Tribe, which solicited pitches from its “creators” and “influencers” for images and videos supporting Bloomberg’s candidacy in exchange for $150. “We’ve got a network of people who want to create content for brands, and in this case, the brand was the Bloomberg campaign,” Tribe CEO Anthony Svirskis says. “I equate it to a creative agency or a freelancer producing ad content on behalf of an ad campaign.”

It is, however, significantly more complicated than that. “Social-media-influencer political ads are definitely in the gray zone of the law, and I think that’s being charitable,” says Bonnie Patten, executive director of the nonprofit Truth in Advertising. The Federal Trade Commission requires influencers who partner with brands on commercial posts to disclose to their followers that they are being paid to advertise, which is why anyone following a Kardashian or two will notice an #ad tag on their posts shilling laxatives or prescription medication. Political ads are governed by the Federal Election Commission, though, not the FTC. The FEC hasn’t laid out a coherent set of rules for internet-based political advertising, beyond requiring certain disclosures. Individual platforms have been crafting their own policies around political ads, though many of them are still in flux. (TikTok, for example, recently banned political ads altogether.) That means influencers looking to get political currently exist in a confusing no-#ads-land.

The ambiguity is making many marketing companies uncertain about how to proceed. Tribe, for example, chose to collect the photos and videos its influencers made for Bloomberg internally rather than encouraging them to upload content directly to social media. This way, the firm avoided parsing out each platform’s fluctuating rules. “We deduced that it wasn’t clear enough to proceed down that path, so we kept it as a content campaign,” Svirskis says. Since the Daily Beast article was published, says, Tribe has received offers from additional campaigns, but he isn’t sure the company wants to dive into political content in a big way. “We have to tread carefully.”

Influencer marketing company ViralNation has been approached by several political campaigns according to its CEO, Joe Gagliese, but chose to turn down opportunities out of a similar sense of caution. “We just weren't at a place where we felt comfortable doing it,” he says. Now, however, his company is close to launching a dedicated political wing at the end of this month. “We’ve done so much preparation,” Gagliese says. “I’m still nervous about it.”

Mae Karwowski, the CEO of influencer agency Obvious.ly, is also wary of jumping into the political arena. “Worst-case scenario, you get someone who doesn’t care about politics, talking because they’re getting paid. That’s such a disservice to the country.”

Transparency will be crucial for companies that do get involved, especially as the exact rules about when influencers have to tell people they’re posting an ad are also up in the air. It’s not clear, for example, whether an influencer who accepts a plane ticket to visit a candidate or other nonmonetary compensation would have to then disclose that to their audience if they went on to promote them. This means many of the influencer marketing firms are interpreting the guidelines as they see fit. “Disclosure is going to be key,” Gagliese says.

Even with disclosure, sticky situations may arise. KaleSalad, the Instagram account Bloomberg enlisted, is the work of BuzzFeed employee Samir Mezrahi. Shortly after KaleSalad posted its Bloomberg ad, a former BuzzFeed employee wondered on Twitter how it had been permitted. "This deal was done between the campaign and KaleSalad exclusively—which is allowed under the guidelines of our Creators Program. The employee who oversees the Salad is not a News employee,” BuzzFeed director of communications Matt Mittenthal told WIRED by email. (BuzzFeed’s newsroom, BuzzFeed News, is kept separate and subject to different guidelines than other divisions.) The company's decision to allow non-News staff to accept money for political ads has created consternation in the office, according to a BuzzFeed staffer.

To sidestep some of these ethical quagmires, some influencer agencies are focusing on unpaid partnerships. “I wanted to try a few small tests before this year. So we did some pro bono work with the Cynthia Nixon campaign in New York,” Karwowski says. “We didn’t pay anyone. We gave them T-shirts.” She believes offering influencers access to politicians is more effective than paying them money. “Have them go to a VIP meet-and-greet, have them take a selfie and ask a question just like you would an influential leader of a union, someone who has a real audience and sway over their community, not as an ad unit.”

“Bernie isn’t paying the Strokes to go on tour with him,” Karwowski says. (Sanders has also received organic support from the popular meme account @DaShareZone.)

However, this is not the consensus opinion. Hougland, in contrast, believes it’s a better policy to pay influencers well for their efforts, as long as transparency is maintained. “People should be compensated for a fair day’s labor. Campaigns are paying their canvassers. They're paying their pollsters. They're sometimes paying people to even be in the audience for events,” Hougland says. “It doesn't seem that much of a reach to me to pay a supporter who already likes you, but who happens to derive some of their compensation through the creation and distribution of content.”

"The category may be small as a slice of spending, but it punches above its weight. The impact of influencer opinion on voters may far exceed the amounts paid to place them in media."

One thing Hougland and Karwowski agree on? Both stressed that progressives need to catch up to their right-wing opponents when it comes to comprehending how to use online influence. “In general, the Republicans are doing a better job than the Democrats at digital marketing and understanding how the landscape’s changing,” Karwowski says. She and Hougland both see President Trump as a pioneer of leveraging online influencers to build an audience.

While the Trump team’s taste in influencers is dominated by people who made their names specifically touting right-wing politics—Charlie Kirk or Diamond and Silk, for example—these recent attempts from liberal and left contenders are more focused on finding people who connect with more mainstream audiences but who are also willing to veer away from traditional commercial partnerships and into an online hybrid of spokesmanship and punditry.

Will the American people warm to the idea that the beautiful people and weird-looking cats they follow on social media are also sources of political content? This kind of promotional push represents just a tiny fraction of efforts to get out the vote, but it could be disproportionately influential. “The category may be small as a slice of spending, but it punches above its weight,” Kip Cassino, the executive vice president of media consulting firm Borrell Associates, tells WIRED. “The impact of influencer opinion on voters may far exceed the amounts paid to place them in media.”

Of course, it might be far more effective for candidates to simply mold themselves into influencers. US representative Alexandria Ocasio-Cortez is the most high-profile politician to function as a millennial influencer; Ocasio-Cortez grew a passionate national following as she ran for office in New York in part because she’s exceptionally good at Twitter and Instagram, explaining her political stances and quipping at opponents. But politicians with digital charisma like AOC’s are still rare—and in the meantime, there’s a horde of upstart companies connecting with aspiring social media stars ready to take money from the campaigns of less internet-gifted contenders. In fact, Gagliese says part of his firm’s political component will be a program to help candidates grow their own online influence, although he calls the details of the program “proprietary.”

Perhaps the real question is whether voters will embrace this kind of advertising as much as campaigns hope they will. “This guy is really shoving it down our throats eh,” one user wrote beneath a @FuckJerry Bloomberg meme. Another simply typed “This sucks.”