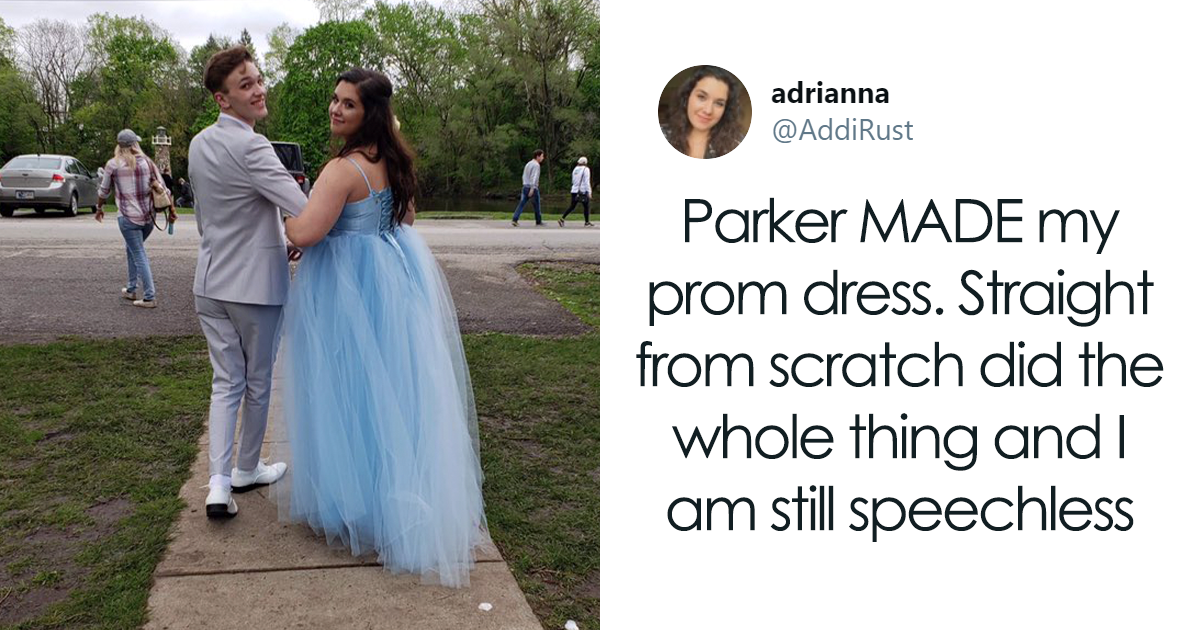 Even though we all have very different preferences when it comes to fashion and we’re not here to argue about taste, we can probably all agree that most girls tend to have that Disney-bound dream when it comes to prom. Suddenly they’re all about those puffy princess-like dresses and boy, are expectations high when they’re on the hunt for that perfect one! Such was the case when Pendleton Heights senior Adrianna Rust went out looking for her perfect gown to wear to prom. While it’s safe to say she did find one, the price tag made her leave with a frown upon her face. That’s when her best friend and prom date Parker Smith came to her aid, put on his fairy godmother wings and started working on the perfect Cinderella dress for Addi. More info: AddiRust

As all girls before prom, Pendleton Heights senior Adrianna Rust dreamed about finding the perfect dress Addi’s fairytale began last February when she started her hunt for the perfect dress but realized it was way too expensive after finding one. “Parker, why don’t you just make my prom dress!” she jokingly told her best friend and the two laughed about it for a while. Luckily, her best friend Parker Smith took her joke that maybe he should make her one quite seriously That little joke was enough for Parker to actually start thinking that maybe he could actually make her the dress of her dreams, even though he had never sewn anything previously in his whole life. Isn’t he a real Prince Charming? Parker made a sketch for the dress himself and then moved on to the hardest part – teaching himself how to sew. Even though his grandmother helped him along the way, he admitted that he ended up redoing parts of the dress a couple of times just to make sure everything was a perfect fit. “I’m such a perfectionist that I was up adding more stones to the dress even the night before prom,” he said.

He started by sketching out Addi’s perfect gown And then proceeded to make it through trial and effort “Quite a journey, but the first thing I’ve ever sewn (a prom dress) has been finished, just in time for the ball! Not only did I get the honor of being the Prince Charming to the beautiful @AddiRust, but her fairy godmother as well, haha! I’m so thankful for her. (From scratch),” Parker tweeted along with the beautiful pictures of the pair on their prom day.

The outcome turned out so perfectly, people are suggesting he should make a career out of it People fell in love with the story