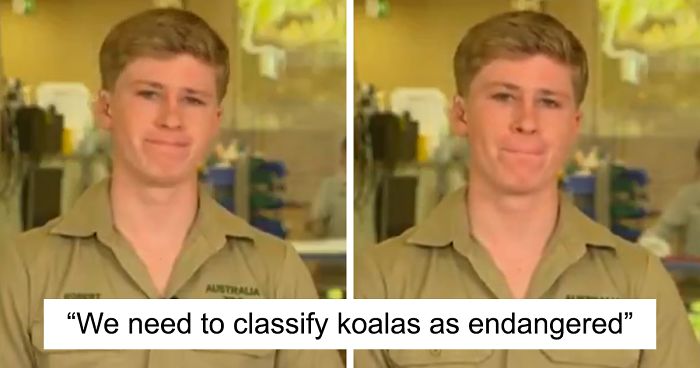 As the whole world is watching the devastating bushfires ablaze in Australia from afar, some people are facing terror in real-time. And while firefighters give it all they’ve got to fight the terrors and save as much of the stunning Australian wildlife as they can, the impact is still so huge it could be difficult for one to wrap their head around it. The son of “The Crocodile Hunter” Steve Irwin, Robert, tried explaining the real scale of the damage done by the wildfire with his mom Terri and had a hard time holding back his tears while his mom spoke about the impact on the vulnerable koala population. Since half a billion animals were potentially lost in the Australian bushfires, the Irwin family has already helped over 90,000 animals.

Terri and Robert Irwin spoke with Sunrise, trying to explain the real impact of the bushfires on the Australian wildlife

Terri Irwin chats about the devastating impact of Australia’s bushfires on our vulnerable koala population.

There’s a widely-reported estimate that Australia has already lost almost half a billion animals in the bushfires devastating the country. Hundreds of thousands of native animals have been killed or heavily injured. Many people across the country try to aid the injured animals, with zoos and veterinary clinics in the front lines. The Australia Zoo Wildlife Hospital team is among them as well, despite being almost two thousand kilometers away from the fire zone. “We’re able to offer a safe haven for wildlife needing help,” Terri Irwin told Sunrise. Her son Robert continued saying they’re seeing all kinds of different injuries. They are currently attending to possums, birds, koalas, platypus and many other types of animals being looked after at the purpose-built facility.

While his mom was explaining the current state of the koala population, 16-year-old Robert had a hard time holding back tears The two explained that smoke inhalation and burns are happening frequently, but also animals are going into areas where they’re not supposed to be to escape the horrific conditions. This means they’re getting hit by cars and are being attacked by domestic animals, so there’s a horrific knock-on effect. They also felt really concerned about the koala population. “Koala instinct is to go up, as safety is in the top of the tree,” Terri explained. “Eucalyptus trees have so much oil that they ignite and actually explode in a fire. That means being able to treat and help koalas is few and far between because they’re basically incinerated.”

Apparently, it could be necessary to enlist koalas as endangered species after this devastating event The late Steve Irwin’s 16-year-old son Robert was having a hard time holding back the tears as his mom elaborated on the situation of the koala population saying, “We’re just trying to do our best to help in any way we can, but it’s an absolutely horrific situation. We’re heartbroken.” One of the firefighters working in the fire zone, Damian Campbell-Davys, saw the situation and said: “Kangaroos can hop away, but koalas can’t escape.”

The people of the Internet admired his sincere reaction