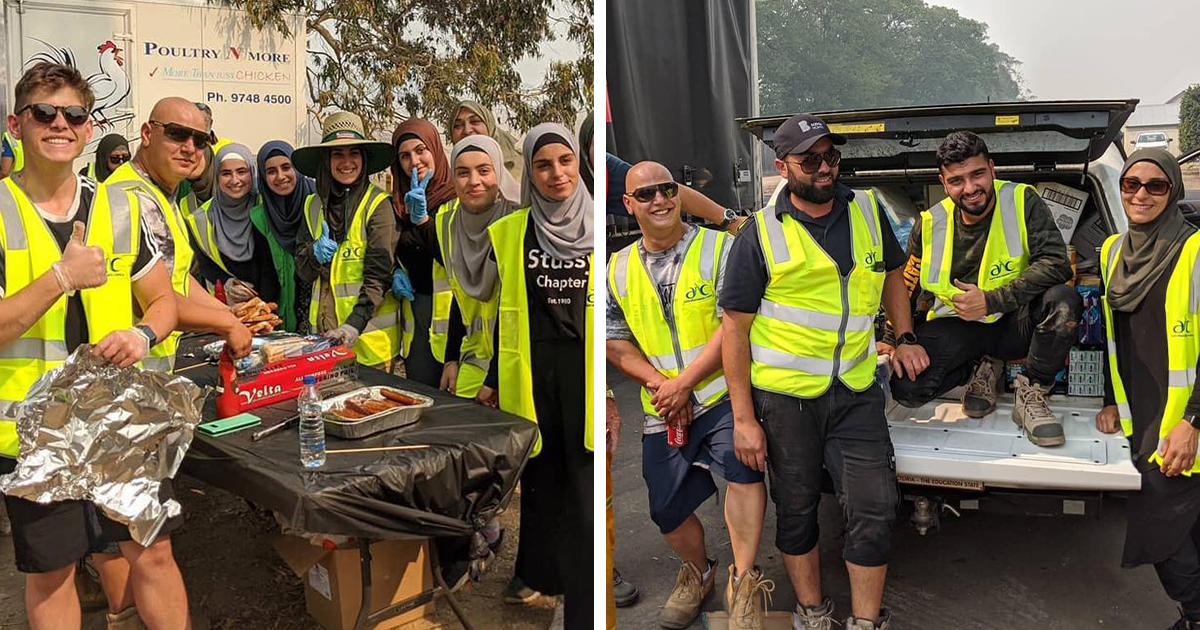 The current bushfires in New South Wales and Victoria were recently declared the largest forest fires in Australia’s history. What first started off as a local problem now has caught the entire world’s attention due to its epic proportions and desperate need for help.

A recent Bored Panda article on the topic can fill you in on how devastating the bushfires have been thus far. Many initiatives were launched to help with the seemingly unstoppable bushfires, with one of the most notable being Celeste Barber’s Facebook Fundraiser, which has managed to raise 31 million dollars from over a million people worldwide, with thousands of other organizations also raising millions for the cause. On January 3rd, a community of Muslims from Newport, an inner suburb of Melbourne, Victoria, traveled nearly 4 hours eastward, toward the bushfire front near Johnsonville, with 5 trucks worth of supplies like food and water to help the local fire brigade and community fight off the wildfires.

“Last Thursday, we came together and decided that we needed to do something for those affected by the bushfires,” explained a representative of the Australian Islamic Center. “Having formed a strong relationship with our local firefighters, the Melbourne Fire Brigade (MFB), we reached out to them and asked what’s the best possible way we can help. They said that we can help by distributing goods and raising funds. That’s when we got the ball rolling and launched our bushfire appeal.” They continued: “We reached out to the community via social media and personal messages, asking them to donate whatever they can. Within 48 hours, we have managed to fill 5 truck-loads of much-needed items. All donated items were brand new and covered all areas of necessity: female hygiene products, water bottles, milk, baby wipes, fruit, and much more.”

Many towns, villages, and smaller communities are struggling to survive as the bushfires cut off food and water supply routes. This is on top of the immense air pollution causing health problems and the ever increasing heat that gives no relief for many Australians. The Australian Islamic Center, in collaboration with Human Appeal International, has recently launched an initiative called the National Bushfire Emergency Appeal, which aims to provide relief for Australians who have lost their homes to the fires, as well as to support local communities in battling the disaster.

Since the bushfires have cut off food & water routes, such communities are left without much supplies to survive Besides the supplies distributed, the Muslim community also organized a barbecue for the local communities. There are reports that since many locals were not sufficiently ready for the coming fires, they may have been starving for anywhere up to 48 hours at this point.

“We also had a sausage sizzle on Friday noon and raised $1500,” explained a representative of the Australian Islamic Center. “Our volunteers stayed up till 12:30am on Saturday (4th of January) sorting the donated items and loading them onto the trucks. That same Saturday at 3am, our volunteers embarked on their journey to distribute the aid.” “The first destination was at Johnsonville Fire Brigade, where they cooked up breakfast for 150 fire fighters,” elaborated the Australian Islamic Center. “Then they were escorted by the MFB to the affected areas where those who had evacuated their homes were residing. Our team has set up another cookout and called all to eat. They had a variety of meals including lamb and chicken kebab, beef sausages, and minced meat. They also had sweet and savory items.”

They continued: “The aid was distributed to different locations, with a guide from the MFB. The team worked throughout the day unloading the goods at these drop off locations. The volunteers worked tirelessly from 3am till 11pm that day.”

At the moment, over 15M acres of land have been ravaged by the fires in New South Wales & Victoria When asked about the current situation with the bushfires and what were some of the challenges the Australian Islamic Center had to face during their initiative, they had this to say: “The situation of the bushfires is worsening. The fires haven’t affected our area—they are happening out in the country areas. The biggest challenge for us is seeing our brothers and sisters going through so much pain, it really cuts deep. The only thing we can do is to have hope and pray for rain.”

As of this article, the bushfires have already ravaged 15 million acres of land in New South Wales and Victoria, destroying nearly 1,800 homes and causing 22 deaths. The fires have not yet been stopped, so these figures are expected to rise.

Firefighters as well as volunteers, local communities, and the aforementioned heroes have been giving their all and working around the clock to help alleviate the effects of the bushfires. You can also help by donating to the National Bushfire Emergency Appeal, which currently accepts money donations as well as food and non-food supplies.